The Importance of Government Subsidies for EV Success

“At the end of the day, it seems that smaller markets are clustered at the higher end of the EV penetration ranking. This suggests it will be much more difficult to mandate and effect massive vehicle fleet shifts in favor of EVs in much larger markets without significant government subsidies and/or mandates, as well as significant infrastructure investment in EV charging facilities.”

“Tesla had about 80% of the EV market in Hong Kong. The cessation of the subsidy in April has raised the cost of Tesla cars by between 50% and 80%. Will Hong Kong’s EV penetration rate follow the others who have ended subsidies, and fall?”

The US Congress is hammering out the details of tax reform proposals from the House and Senate. At risk is a continuation of the subsidies for clean energy investments—investments in new wind turbines and solar panels, along with the subsidies for electric vehicle (EV) purchases. The House bill would extend and modify various clean energy subsidies, primarily related to the production tax credit for wind and solar power generation, allowing them to phase out rather than to be eliminated at once. The bill would eliminate the federal tax credit for EV purchases.

The recently unveiled Senate Republican tax proposal would keep the EV subsidy, as well as the production tax subsidy for clean energy generation. At the same time, the Senate bill would continue various tax incentives for small oil and gas producers who are able to deduct the cost of “intangible drilling costs” that cover expenses for repairs and supplies used in drilling wells.

Sen. Stabenow was quoted as saying:

In so many ways this is a shell game that when it ends hurts a lot of jobs in Michigan and middle-class families and the benefits go to the wealthiest Americans. It’s not a good deal.

Her choice of the phrase “shell game” in discussing the EV tax credit was interesting. According to the Merriam Webster’s dictionary, the definition of “shell game” is: (1) thimblerig played especially with three walnut shells; (2) fraud; especially, a swindle involving the substitution of something of little or no value for a valuable item. We wonder if she really meant to call attention to this government-sponsored “scam.”

Yes, when it ends, it will impact those auto company employees building EVs, but only if auto companies stop building other types of vehicles to meet the future needs of Americans. Interestingly, the auto manufacturers have said that when the market shifts a substantial portion of new car sales to EVs, they can operate with smaller manufacturing facilities and fewer workers. So, which outcome is worse?

While Congress struggles to rationalize the two very different visions for tax reform, there will be much noise and debate over the value of clean energy subsidies. If the tax revamp provides a significant tax reduction for Middle Class Americans (whatever that means), the value of a federal tax credit for buying or leasing an EV would likely be severely limited.

That reality does support Sen. Stabenow’s comment about the tax credit “benefits going to the wealthiest Americans,” because they will be the only ones paying meaningful taxes. Remember that for the tax credit to be of value to EV buyers, they must have a current federal income tax liability sufficient to use the credit as it is limited to the year the EV is purchased and there is no carry-over value if any of the credit is not utilized in that tax year.

Just how important are government subsidies for the success so far, and likely future success, for EVs? In the last Musings, we wrote about the success of EVs in achieving the status of a mainstream technology, as defined by Everett Rogers in his book, Diffusion of Innovations, published in 1962. 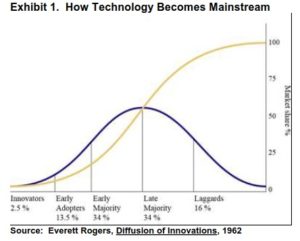 As a technology moves beyond the Innovators and Early Adopters and into the Early Majority, as shown in Exhibit 1 (prior page), it is acknowledged to have achieved mainstream technology status. As we pointed out, 28.9% of new car sales in Norway in the first half of 2017 were EVs. This puts the country on track to reaching an estimated 32% EV market share for all of 2017. This would be well past Dr. Rogers theory for mass market adoption occurring after the first 15%-18% of the market has bought into a technology.

In our article, we presented Exhibit 2 prepared by ev-volumes.com, which showed the top 20 markets for EVs through the first half of 2017. We pointed out how Norway was leading the EV world, and had become the third largest EV market after China and the United States. The disparity between this EV market leader and the two largest economies of the world cannot be ignored. Note that the second market measured by the highest EV penetration rate is Hong Kong, which is geographically tiny compared to Norway, and miniscule against the Chinese and U.S. markets. The top 20 list provides interesting comparisons that we thought we would explore for indications of what it takes for EVs to be successful in a country. 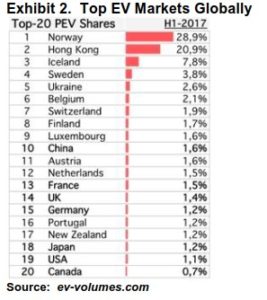 To examine the characteristics of these markets, we prepared a spreadsheet comparing the 20 markets by: population; land mass; population density; 2016 new car sales; vehicles per 1,000 population; gasoline prices; kilometers of paved roads, highways and unpaved roads; and, the number of people per kilometer of paved roads and the total roadway system.

As expected, the data provided a wide range of rankings, but largely little commonality in characteristics as a guide to EV acceptance. The closest relationship we found appears to be between the EV penetration rate and the price of gasoline, which plays into the economic competitiveness of EVs versus traditional internal combustion engine cars (ICE). 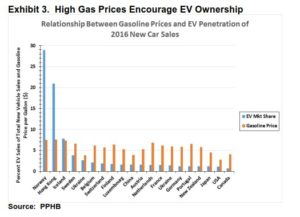 Gasoline prices are the highest in Norway, Hong Kong, Iceland and Sweden, and so are those respective markets’ EV penetration rates. The first divergence appears with Ukraine, where gasoline prices are low and EVs are prevalent. One might ask how Ukraine achieved such a high EV penetration rate. It is important to note that the Ukraine car market is only about 75,000 vehicles a year. The analysis of Ukraine’s success starts with it having the second-lowest number of vehicles per 1,000 people, only about 70 ahead of China, which has the lowest ratio.

Surprisingly, Ukraine ranks 13th in population density (people per square mile), but it is 3rd in the ratio of people per kilometer of paved roads, trailing only Hong Kong and China. In other words, it is likely there are lots of people where there are paved roads and also lots of congestion. This becomes an ideal environment to sponsor EVs.

Surprisingly, the EV market in Ukraine has been imported used EVs, as new car sales are not subsidized and manufacturers have been leery of entering the market. Three manufacturers did enter this year, and the government is developing subsidy schemes to help accelerate the market’s development. It would appear that the Ukraine market is driven by EV enthusiasts rather than purely financial calculations, but that may be changing.

While Norway has fewer people and more land mass, its population tends to be concentrated in urban areas, raising the population density much higher than a national average would suggest. But the key similarity has been the aggressive tax and operational subsidies offered to residents to encourage them to either buy or lease EVs for congestion and environmental reasons.

It will be interesting to see how Hong Kong’s EV rating changes now that the government has decided to stop subsidizing them. The decision to halt the subsidy came following protests by German car manufacturers that the market was “owned” by Tesla (TSLA-Nasdaq) because only battery EVs were subsidized. German car manufacturers have been providing plug-in hybrids. As a result, Tesla had about 80% of the EV market in Hong Kong. The cessation of the subsidy in April has raised the cost of Tesla cars by between 50% and 80%. Will Hong Kong’s EV penetration rate follow the others who have ended subsidies, and fall?

To make it easier for readers to examine our spreadsheet, we have divided it into two parts (easier on the eyes). This enables comparison of the top 20 EV markets by the various measures. 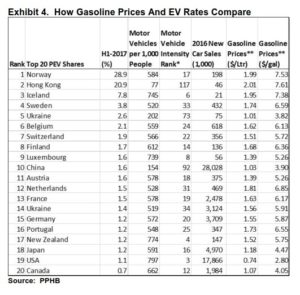 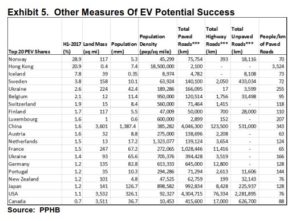 At the end of the day, it seems that smaller markets are clustered at the higher end of the EV penetration ranking. This suggests it will be much more difficult to mandate and effect massive vehicle fleet shifts in favor of EVs in much larger markets without significant government subsidies and/or mandates, as well as significant infrastructure investment in EV charging facilities.

That latter consideration has yet to receive the amount of public attention likely needed in order to mobilize society to embrace EVs. Meaning, people must be willing to see a portion of their tax dollars directed toward building a sufficient EV charging infrastructure to encourage more people to buy EVs.

Without that government commitment, private enterprise will be cautious in its investments; not wanting to get too far ahead of the shift in the vehicle fleet mix, to attempt to avoid negative financial returns. The future of charging station investments may need to be public-private ventures to succeed.

A recent study of the top five European countries for EVs showed some interesting points to consider in assessing the pace of EV acceptance. A survey of Norwegian EV drivers showed that the tax exemptions were their number one consideration. Fortunately, the high tax the government charges for high-emission ICE vehicles generates the money necessary to fund the tax credits for EV purchases, making the cars similar in cost and not lifting citizens’ taxes appreciably.

Another consideration helping EV penetration in Norway is that 96% of owners have access to charging stations in either their homes or apartments. Additionally, there is an extensive nationwide charging system for those owners without direct access or for those EVs traveling long distances.

Norway has 2.4 charging stations for every 1,000 registered vehicles, which is more than twice as many as in the Netherlands, the European nation in second place. Norway has eight, 12, or 24 times the number of charging stations per 1,000 vehicles as in the UK, Germany, and France, respectively. In all of these countries, electricity costs are within a similar range, as well as the price of gasoline, so ease of access to charging stations has to be a factor in EV market penetration.

European electric utility company E.ON has just announced plans for expanding its charging stations across Europe, including an ‘electric highway’ of ‘ultra-fast charging stations’ connecting Norway to Italy. The stations will be located every 120-180 kilometers along highways. Each station will have 2-6 units offering 150 kilowatts (kW) of charging, with a potential for upgrades to 350 kW. The ultra-fast charging stations will initially enable charging of a full 400-km range battery in only 20-30 minutes, which can be reduced as charging capacity increases and vehicle technology evolves.

The interesting point from the European study was understanding that plug-in hybrids are becoming more popular than battery-only EVs, as owners hedge against range-anxiety with their battery charges. We found that interesting as it seems to support the view of Toyota Motor Company’s (TM-NYSE) chairman who has spoken out about hybrid technology ultimately winning out over battery EVs. That was why Toyota pushed the development of hybrids with the Prius, a decade ago. His vision is another reason why we would not under-estimate the eventual success of Toyota’s hydrogen fuel cell powered vehicles as the ultimate “clean” vehicle technology.

From the data of these countries, it seems that subsidies and access to charging stations are the critical ingredients for the success of EVs, at least in Europe, where urban living dominates and distances traveled are relatively short. Clearly, as our spreadsheet shows, there are many other considerations about the countries, such as driving distances and consumer attitudes that come into play in determining EV success. In most cases, countries are still dealing with EV enthusiasts, so government policies will be the true driver of success until the economics of EVs improve further.