“Based on calculations using the Swedish study’s various battery CO2 emissions estimates, as well as the methodology described by the EPA, I estimate that the carbon emissions sinkhole would equal between three and 5.4 years of driving an ICE car.”

Sweden just released a study that explores the carbon emissions associated with the Life Cycle of electric vehicle (EV) batteries, with a focus on the emissions associated with their manufacture. Its key conclusion: Manufacture of lithium-ion batteries (preferred battery chemistry) emits a significant volume of greenhouse gases, and that volume is directly related to the size of the battery.

The study, sponsored by the Swedish Energy Agency and the Swedish Transport Administration, addressed issues about EV battery pollution as Sweden decarbonizes its transportation sector. Sweden has been an active supporter of EVs, as well as other eco-vehicles, via tax subsidies. The result has been a sharp growth in the number of EVs sold in recent years. For 2016, slightly over 13,200 EVs were registered in Sweden, a 52% year-over-year increase, according to Inside EVs.

The success of EVs in various European countries varies. For the entire European Union, of which Sweden is a member, fourth quarter 2016 EV sales totaled about 17,600 cars, down 11.4% from 2015’s fourth quarter.  The EU decline was driven by a 74% drop in sales in Denmark, a 25% fall in Germany, a 28% decline in the UK, and 75% and 21% drops in Greece and Portugal, respectively. Sweden’s EV sales in the fourth quarter, however, increased 30%, as 904 EVs were sold. 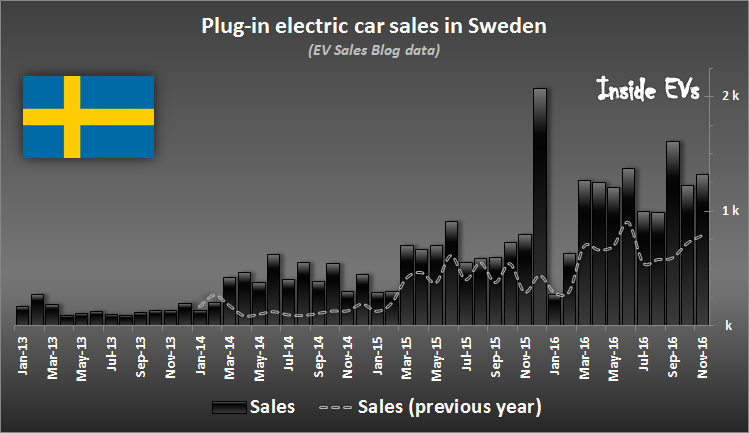 Exhibit 1 shows how EV sales in Sweden increased noticeably beginning in 2014, largely in response to the government’s subsidy program started in 2012.  The program provided a subsidy of 40,000 kroner ($4,678) per car for the purchase of EVs and other “super green cars” with ultra-low carbon emissions (below 50 grams of carbon dioxide per kilometer).  EVs are also exempt from the annual car tax for the first five years of their first registration.

As of July 2014, the government subsidy fund was exhausted. BIL Sweden, the national association for the automobile industry, requested an additional 100 million kroner ($11.7 million) for subsidies for EV and super clean cars sold between August and December 2014.  The government actually appropriated 215 million kroner ($25.2 million), which also covered retroactive subsidy payments for cars registered in the last half of 2014, besides EV sales going forward.

The government increased the super green car rebate by 132 million kroner ($15.4 million) for 2015, and by 94 million kroner ($11.0 million) for 2016.  But beginning in 2016, only zero emissions cars are entitled to receive the full 40,000 kroner subsidy, while other super green cars including plug-in hybrids, receive only half the subsidy.  The five-year car ownership tax exemption remains in effect.

As Sweden embarks on an investigation into the CO2 emissions of batteries, it certainly has to be watching what has happened in Denmark after a cost/benefit analysis led its government to eliminate EV subsidies. The result has been a disastrous fall in EV sales. Now the cost/benefit debate is a topic in Norway. In the United States, there are numerous examples of state government subsidies for EVs being eliminated, with negative fallout on EV sales. The subsidy pullbacks are being driven by the cost to governments for their largess and the disproportionate benefit being awarded to wealthy residents, who have been the earlier buyers of EVs, at the expense of middle- and low-income residents.

The Swedish study showed substantial CO2 emissions coming from the manufacture of the EV batteries. Importantly, the volume of pollution rises in a linear relationship with battery size, a trend driven by EV manufacturers working to extend their EVs’ range to ease consumer “range anxiety” concerns.

The Swedish report was a meta-study examination of all the studies conducted on CO2 emissions related to EVs in recent years.  A purpose of the study was to answer policy questions about promoting EVs and their long-range impact on the environment, as well as highlight areas of research where more work needed to be done.

As the authors of the study pointed out, there have been numerous studies on the emissions of EVs, but most of them have concentrated on the use-phase of the cars, not their manufacture. Therefore, this study focused on the emissions associated with battery manufacture and battery size. The study found that much of the research is questionable since it is not sufficiently transparent to enable researchers to examine the data and calculations reported. Additionally, many of the studies were based on hypothetical plants rather than using actual manufacturing data. To offset that bias, the report’s authors relied more on those studies employing actual data.

What the study concluded was that there were 150-200 kilograms (330-440 pounds) of CO2 emissions for every kilo-watt hour of battery storage.  To arrive at this estimate, the study examined numerous studies examining the composition of the batteries utilized in EVs.  This involved considering the various chemistries of battery cells, as well as that of the cathodes and anodes needed to extract the power in batteries.  Exhibit 2 shows that the battery case is a major source of pollution because it is composed of metal, accounting for roughly 30% of a battery’s weight, and requiring extensive power to manufacture. 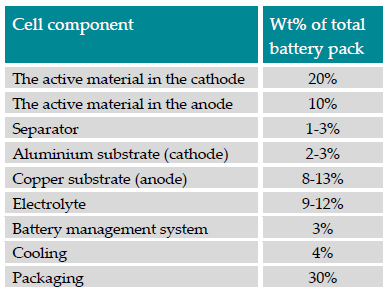 An important question the study addressed was the pollution related to the scaling of EV batteries. The data shows that pollution increased directly with battery size. The authors see this as an area where new battery chemistry could offset increased pollution with increased battery size, but no one is sure when it will arrive. Exhibit 3 shows the authors’ calculations demonstrating how as battery storage ramps up, so does the total CO2 emissions.

The thrust of the report was designed to answer a series of questions dealing with short-term and long-term issues with battery manufacture and carbon emissions. Short-term, the report addressed the amount of carbon emissions from battery manufacture, as well as where the bulk of the pollution comes from (50% from manufacture and little from the mining and refining of lithium-ion), as well as the pollution impact from plant locations. It also addressed whether CO2 emissions scale with increased battery size.

From a long-term perspective, other than improvements from dealing with short-term issues through new battery chemistry and locating manufacturing plants in areas with more environmentally-friendly power sources rather than making siting decisions based on wage costs, a battery recycling industry needs to be considered. While one has yet to develop, partly due to the small number of EVs and their young age, it is something that industry and governments should begin examining.

Recycling the raw materials in a battery in a usable form for remanufacturing would reduce future pollution from mining and refining the raw materials. While not related to the study, more people are starting to question the geopolitical and environmental aspects of extracting rare earth minerals, often referred to as conflict minerals, from around the world. In fact, some new reports suggest these conflict minerals may become an impediment to the projected pace of EV development.

Not surprisingly, this report has become highly controversial due to its suggestion that EV batteries start life with a significant CO2 deficit that will only be worked off over time when compared to an internal combustion engine (ICE) car. EVs do have an advantage in driving-related pollution versus ICE vehicles, but cleaner conventional engines could increase the EV disadvantage.  That analysis prompted the controversy.

The study was published initially in Swedish, but later translated into English. An article dealing with the original report was published on NyTeknik and subsequently republished in English on Tallbloke’s Talkshop, a climate blog. The article generated numerous comments, including one from Bjorn Lomborg, a Danish author and visiting professor at the Copenhagen Business School as well as President of the Copenhagen Consensus Center.  He is famous for his 2001 book, The Skeptical Environmentalist, along with an extensive op-ed output questioning the dire forecasts from climate change and the costly recommendations for fighting it.

Mr. Lombog’s Twitter comment about the original posting was: “Tesla battery emits 17.5tCO2 in production. Equivalent to driving gas car 8.2 years. Only THEN you might emit less CO2.”  Tallbloke’s Talkshop utilized that comment to title their article: “Study: Tesla car battery production releases as much CO2 as 8 years of driving on petrol.”

Elon Musk weighed in the following day with a tweet stating: “Calling this cueless [sic] would be generous. Much less energy required for lithium-ion batteries & Gigafactory is powered by renewables anyway.” When questioned about data for Tesla’s batteries, Mr. Musk declined to provide any information, other than to Tweet that making the Model 3 will produce “a lot” less CO2 than it takes to make a $35,000 gas car.

When he was asked whether the Tesla battery data was available to be used as a tool to fight the negative “activist” articles about EVs, Mr. Musk responded: “That’s because the accurate articles are boringly obvious, so they get no press attention.”

They must be very boring since they didn’t appear in the study. Maybe the authors did an incomplete search, but based on their methodology, which was clearly set out in the report, as well as the list of universities and institutes where the research on EVs was conducted (Exhibit 4), we suspect the studies Mr. Musk is referencing may not be publicly available, making his reluctance to disclose the Tesla data interesting. Is that data really a competitive secret?

Further sparking the controversy was an article posted on the Popular Mechanics web site titled:

That Tesla Battery Emissions Study Making the Rounds? It’s Bunk.  No, making a Tesla battery does not equal eight years of driving an internal combustion car.

The comment was a criticism of the title of the climate blog’s article, which was based on Mr. Lomborg’s tweet. We have no idea how he reached his conclusion.  The point of the entire media controversy is that it is about something not stated, or even implied, in the Swedish study.

Importantly, the Popular Mechanics commentary accepted the estimate of the 17.5 metric tons of CO2 emissions from a Tesla-size battery put forth in the study.  They only wanted to challenge how long it would take driving a gasoline-powered car to offset that volume of pollution – not that there was a legacy that needed to be overcome. Based on US Environmental Protection Agency fuel-efficiency data for an Audi A8 4.0 car, Popular Mechanics calculated that the Tesla battery CO2 emissions would be overcome in less than three years of driving, and not Mr. Lomborg’s eight year time estimate.

Based on calculations using the Swedish study’s various battery CO2 emissions estimates, as well as the methodology described by the EPA, I estimate that the carbon emissions sinkhole would equal between three and 5.4 years of driving an ICE car.  While our estimates are closer to those of Popular Mechanics, the point is to ignore the controversy generated by Mr. Lomborg’s tweet.

As the Swedish study documents, there is a significant carbon emissions legacy that comes with every EV. That pollution legacy will only grow as the push for larger EV battery packs continues. Even a 2015 report by the Union of Concerned Scientists acknowledged the higher emissions associated with battery electric vehicle manufacturing, but they suggested that over the life-cycle of EVs they are still cleaner than ICE vehicles.

Taking steps to overcome the pollution sinkhole should be high on the agenda of EV manufacturers and the governments promoting their use.