“In cities, piping exhaust steam to closely packed buildings can make sense. But trying to impose CHP in typical American suburbs where there are no industrial uses, or to where buildings are widely spaced, is irrational.”

“Combined Heat and Power has become a political football in the service of government energy planning to cut CO2 emissions. CHP can be used effectively in specific applications where it can be justified economically, but it shouldn’t be forced on Americans by government edict.”

Combined Heat and Power (CHP) is dragged out periodically by anthropogenic global warming (AGW) activists who want to replace central-station electricity with distributed power from wind and solar. Power Magazine recently highlighted this movement in the section, “Global Developments Giving CHP a Much Needed Boost,” with two articles devoted to CHP installations. The UNFCCC COP 21 Paris agreement to cut CO2 emissions, the feature argued, could provide the needed boost to CHP growth.

Typically, promoters of CHP start by saying that CHP improves efficiency–even to the point of 90%. Greenpeace made this claim in its plan, the “Energy [R]evolution” which is riddled with hype and misinformation.

CHP uses exhaust gasses, or steam from power plants that generate electricity, to provide heat to buildings or industrial processes. This results in more energy being used for work, but it doesn’t dramatically improve efficiency.

A good analogy is one suggested by the former editor of Power Magazine:

An automobile’s engine using gasoline has considerable horsepower and also heats water in the engine’s cooling system. The hot water is then used to heat passengers during the winter. While this takes advantage of the heat in the water, the water doesn’t have the power to drive the automobile. Gasoline has high energy density, while hot water has a low energy density. 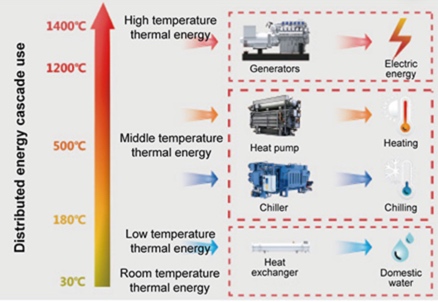 The Obama administration promoted CHP with an executive order. The EPA, under the Obama administration, issued a 22 page report touting the benefits of CHP as a “clean energy solution”. It has also maintained a database (http://bit.ly/2jACeNT) to provide information supporting CHP. For example, CHP qualified for a 10% investment tax credit in 2016.

(Suburbs with free-standing residential buildings are an anathema to city planners and to those promoting CO2 induced climate change, so CHP fits a strategy that promotes mixed use development.)

Combined Heat and Power has become a political football in the service of government energy planning to cut CO2 emissions. CHP can be used effectively in specific applications where it can be justified economically, but it shouldn’t be forced on Americans by government edict.