“I want to build something that is environmentally forward-thinking. I’m not building a satellite dish so I can watch the Knicks game.”

“‘We’re behind big wind,’ [Mike] Bergey [of Bergey Windpower] said, with small-turbine technology having advanced just a couple of iterations from its early days, while the more mature big-wind technology has pushed forward eight or nine times. A little more help on the R&D front — some of that government solar money, say — would be appreciated, he said.”

Alec Baldwin, the Hollywood movie star, has worked to preserve the charm and character of the Town of East Hampton on Long Island (Suffolk County, New York). But his plan to build a 120-foot-tall wind turbine on his Amagansett property is misguided and temps other people to make the same mistake. 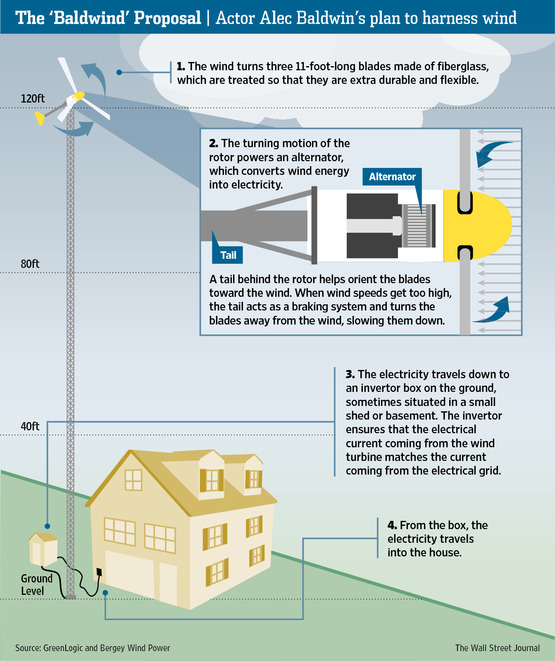 However, as most other, well-meaning “visionaries,” he is doing the Long Island economy a disservice by touting small wind turbines, which is an inefficient choice within an inefficient technology to begin with. It is unfortunate also because of other well-meaning people with much less money to waste could follow his flawed example.

On a simple payback basis, it would take 16.6 years for Mr. Baldwin to recover his $41,505 on the wind turbine. (Periodic maintenance, at several hundred dollars per event, would lengthen the payback period.) Without subsidies, the simple payback would be 39 years.

These calculations are conservative. It is quite possible, if not probable, that this small wind turbine will not have a useful service life beyond 10 years. It is high-risk to have your capital asset naked in the elements.

“The bottom line is, this technology is going to come,” Baldwin stated in the face of the controversy. “There are going to be wind turbines everywhere in this country.”

Probably not. Residential wind power systems are very expensive and have negative externalities for neighbors. Grassroot opposition will grow and speak with truth to power. Meanwhile, governments and other entities enacting subsidies for such projects need to perform more due diligence before earmarking other people’s money to such projects.