“[M]any industry groups have maintained that putting carbon dioxide in the air would produce a general ‘greening’ of the planet. In fact, that’s the thesis of a famous 1992 video, “The Greening of Planet Earth,” which riled the environmental community more than just about anything else [because] … big-name scientists were willing to appear and argue that carbon dioxide will enhance global plant growth.”

Today, President Obama sounds the climate alarm and calls for more regulation of carbon dioxide (CO2). Throwing bad regulation after bad in the name of climate change is all about costs without commensurate benefits. Simple math shows that unilateral action by California or the U.S. or North American will not have a discernible influence on climate decades out.

With the “pause” of global warming, it is time to consider the non-temperature effects of higher, growing atmospheric concentrations of CO2.

Thousands of controlled experiments show that plant matter thrives from higher airborne carbon dioxide levels, the subject of The Greening of Planet Earth. 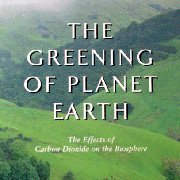 The continuing work of Craig D. Idso (founder and head), Sherwood B. Idso, and Keith E. Idso at CO2 Science produced a Greening update, titled The Greening of Planet Earth Continued. The good folks at CO2 Science are fact-and-study ready to update Greening one more time with everyone’s support! 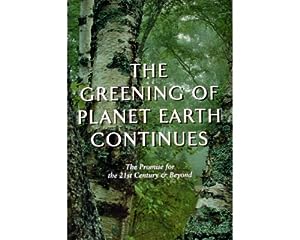 Learn the facts about climate history and the problems with computer simulations used to predict the impact of increasing CO2 levels. Discover what increasing CO2 levels really mean — faster plant growth, greater agricultural yields and improved water-use efficiency in plants. Evidence shows a picture of the ongoing industrial evolution of humankind as the greening of planet earth continues.

The intersection of lower climate sensitivity and carbon fertilization makes the increase of atmospheric CO2 to 400 parts per million less an alarm than a milestone to a moderately warmer, greener, more productive planet earth.

As Harrison Schmitt and William Happer wrote in “In Defense of Carbon Dioxide” in the Wall Street Journal:

Contrary to what some would have us believe, increased carbon dioxide in the atmosphere will benefit the increasing population on the planet by increasing agricultural productivity.

Nowadays, in an age of rising population and scarcities of food and water in some regions, it’s a wonder that humanitarians aren’t clamoring for more atmospheric carbon dioxide.

The subtitle of the above article? “The demonized chemical compound is a boon to plant life and has little correlation with global temperature.”

“The Earth has had many-times-higher levels of CO2 in the past,” said Marc Morano, former spokesman for Republican Senator James Inhofe and executive editor of Climate Depot, a blog that posts articles skeptical of climate change. “Americans should welcome the 400 parts-per-million threshold. This means that plants are going to be happy, and this means that global-warming fearmongers are going to be proven wrong.”

It is appropriate to give the last word to Patrick Michaels and Chip Knappenberger who have fought the good fight for the last quarter century against climate alarmism. Trumpeted the intrepid two at Cato@Liberty (emphasis added):

The atmospheric concentration of carbon dioxide (CO2) has recently reached a “milestone” of 400 parts per million (ppm). In some circles, this announcement has been met with consternation and gnashing of teeth. The proper reaction is celebration.

The growth in the atmospheric CO2 concentration over the past several centuries is primarily the result of mankind’s thirst for energy—largely in the form of fossil fuels. According to the World Bank, fossil fuel energy supplies about 80% of the world’s energy production—a value which has been pretty much constant for the past 40 years.

During that time, the global population increased by 75%, and global energy use doubled. Global per capita energy use increased, while global energy use per $1000 GDP declined. We are using more energy, but we are using it more efficiently. In the developed world, life expectancy has doubled since the dawn of the fossil fuel era.

Explaining the positive externality of CO2, Michaels and Knappenberger continue:

Of course, burning fossil fuels to produce energy results in the emission of carbon dioxide into the atmosphere, tipping the natural balance of annual CO2 flux and leading to a gradual build-up.

1) an enhancement of the greenhouse effect, which results in an alteration of the energy flow in the earth’s climate and a general tendency to warm the global average surface temperature, and

2) an enhancement of the rate of photosynthesis in plants and a general tendency to result in more efficient growth and an overall healthier condition of vegetation (including crops). There’s incontrovertible evidence that the planet is both warmer and greener than it was 100 years ago.

They then discuss the falling estimates of global warming from anthropogenic forcing:

As we continually document (see here for our latest post), more and more science is suggesting that the rate (and thus magnitude at any point in time) of CO2-induced climate change is not as great as commonly portrayed. The lower the rate of change, the lower the resulting impact.

As new science erodes the foundation of climate worry, new technologies are expanding recoverable fossil fuel resources. Horizontal drilling and hydraulic fracturing have opened up vast expanses of fossil fuel resources—mainly natural gas—that were untouchable just a few years ago. The discovery that the world is awash in hundreds of years of recoverable fuels is a game-changer, given the strong correlation between energy use per capita and life expectancy.

400 ppm of carbon dioxide in the atmosphere should remind us of our continuing success at expanding the global supply of energy to meet a growing demand. That success which ultimately leads to an improvement of the global standard of living and a reduction in vulnerability to the vagaries of weather and climate.

400 ppm is cause for celebration. “A world lit only by fire” is not.

MasterResource will continue to update readers on literature summaries on CO2 as the ultimate positive externality, an unpaid for byproduct of the industrial age.