Who is pushing this end-of-hydrocarbon-energy to prevent an end-of-world-calamity agenda? The list is long and includes politicians and UN globalists (look up Agenda 21) who seek more power and control over every aspect of your life.

Scientists, environmentalists, green NGOs and corporations are all chasing the $1.5 trillion per year that feeds the climate crisis and renewable energy industry. The lengthy list also includes scientifically illiterate population-control socialists and Hollywood cause seekers, who are all supported by environmental journalists who never question any “green” causes or scare stories.

Many use the “precautionary principle” to justify drastic actions that perversely have truly drastic consequences, intended or unintended.

Eco-fanaticism has already pummeled Europe. In the past ten years, the price of electricity in Europe has climbed by an average of 63 percent. Polling indicates that 38% of British households are cutting back essential purchases like food, to pay high and rising energy bills. Another 59% of homes are worried about how they will pay energy bills when the Paris accord is enforced.

Poor and middle class families are impacted worst of all.

Families and businesses in the “Blue States” in the Northeast already pay the highest electricity prices in the United States – twice that of some other states. The changes the EPA and this administration are pushing could double those rates – and the rates in other states. Followng are the top ten states (of the lower 48) for 2015’s average residential electricity costs (Source: EIA, May 2016. ). 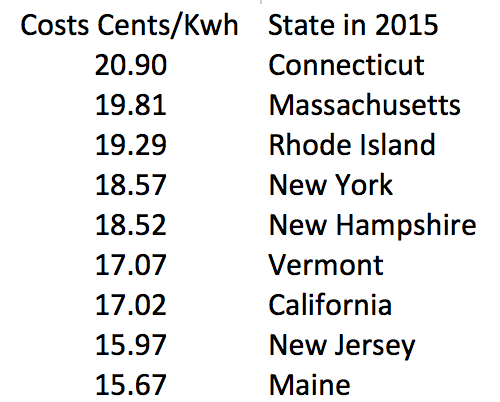 The thousands of dollars that an average Northeastern family saved on gasoline and heating oil in 2015, thanks to fracking and drilling on private land, was truly welcomed as the only “raise” that many families got in many a year.

However, that too will be a memory, if the EPA’s plans are not blocked by the courts – or a President Trump. Moreover, if elected president, Hillary Clinton and Bernie Sanders both plan to eliminate fracking, as well as most conventional oil and gas drilling and production.

With a Hillary Clinton administration and newly Democrat Congress promising to kill fracking and eliminate, hyper-regulate and/or over-tax fossil fuels, energy costs per family would increase thousands of dollars a year. This happened in Europe when the greens took control.

Moreover, soaring energy prices ripple through the entire economy, affecting the cost of all goods and services – including products and services provided by factories, hospitals, schools, small businesses and the shipping of food and other products. Soaring energy prices kill jobs and depress living standards, as companies and communities find they must come up with thousands to millions of extra dollars every year, just to keep the lights, heat and air conditioning on and machinery humming.

That means more industries will head overseas, where energy costs and workers’ wages are far lower, while millions of Americans will be relegated to part-time positions, service jobs at far less than they had been getting, or welfare and unemployment benefits for the newly and perhaps permanently jobless.

Meanwhile, the United States will be expected to send billions of dollars to poor countries and emerging economies, as climate change “reparation, mitigation and adaptation” payments, under the new Paris climate treaty. And those now relatively poor nations, including China and India, will be still burning fossil fuels and taking away our jobs, to lift their people out of poverty.

All the sacrifices by Americans, Europeans and families in other now-developed, now-rich countries will be for naught.

This is what the so-called “progressives” want and are marching in the streets to get.

Former Washington State Democratic governor Dixy Lee Ray saw the second Treaty of Paris coming many years ago. “The future is to be [One] World Government with central planning by the United Nations,” she said. “Fear of environmental crises – whether real or not – is expected to lead to compliance.”

Our aim is not to save the world from ecological calamity but to change the global economic system…. This is probably the most difficult task we have ever given ourselves, which is to intentionally transform the economic development model, for the first time in human history.

In November 2010, IPCC official Ottmar Edenhofer presented an additional reason for UN climate policies. “One has to free oneself from the illusion that international climate policy is environmental policy,” he said. It is not. It is actually about how “we redistribute de facto the world’s wealth.”

In addition to everything else that is wrong, destructive and simply perverse about energy and climate policies, these are truly scary developments. And to top it all off, the Obama administration’s Justice Department is now seriously considering the idea of joining state attorneys general in prosecuting companies, organizations and individuals who dare to think independently and refute claims that human-driven global warming is the greatest danger of all to our future well-being.

All of this sounds a lot more like pre-world war two Germany than the United States of America. It is certainly a trend that we should worry about far more than any honestly conceivable threat from any nearly imperceptible human contribution to the climate changes that have always buffeted humanity and our planet.

Joseph D’Aleo is a Certified Consulting Meteorologist and Fellow of the American Meteorological Society. He was a college professor and First Director of Meteorology at the Weather Channel. He has authored books and papers on how natural factors drive seasonal weather and long-term climate trends.