“But while the IPCC chooses to look the other way, the scientific evidence supporting low equilibrium climate sensitivity continues to pile up…. This is all around good news, for it means that we can focus more on expanding energy access (via fossil fuels) around the world rather than curtail our energy growth.”

There are basically three key parameters that determine the pace and magnitude of future climate change: 1) how much carbon are we going to emit, 2) what percentage of those emissions will remain in the atmosphere (as opposed to being taken up by the biosphere), and 3) how much will the climate warm as a result of what remains in the atmosphere. We understand these things a lot better than we often let on.

The first parameter seems difficult to assess on timescales that exceed a couple of decades. But without the development of new low-carbon energy-producing technologies, future CO2 emissions will be closely tied to the total human population just has they have been historically.  And with population growth estimates being recently revised upwards, perhaps so too should CO2 emission projections. Breaking this coupling is essential for mitigating coming climate change (if that is a desired outcome).

The second parameter has been pretty constant since we started emitting significant amounts of CO2 into the atmosphere. It stands at about 50%. In other words, about half of our CO2 emissions are taken up by the earth’s natural systems and about half remains in the atmosphere. If this percentage were to decline (i.e., more of our emitted CO2 were to remain in the atmosphere) it would bump up the pace of climate change. But, despite forecasts that the earth’s CO2 “sink” will begin to lessen, there is little evidence of this occurring, in fact, the sink seems to be expanding, keeping pace with our growing global emissions.

The last parameter is often formalized as the earth’s “equilibrium climate sensitivity” [ECS]—how much the earth’s average surface temperature will rise as a result of a doubling of the atmospheric carbon dioxide concentration over pre-industrial levels.

This one of the great unknowns within climate science. In its First Assessment Report, published back in 1990, the (then newly formed)  Intergovernmental Panel on Climate Change (IPCC)  assessed the available science and concluded the equilibrium climate sensitivity (ECS) was likely somewhere  in the range from 1.5°C to 4.5°C. The range was so broad as to allow folks to pretty much justify any outcome—from benign (possibly beneficial) change to more alarming scenarios involving forecasts of climate disruption.

Twenty-five years later, in its Fifth Assessment Report, the IPCC estimated that the ECS was likely somewhere in the range between… 1.5°C and 4.5°C. This keeps all bets on the table.

But don’t think that just because the IPCC has not narrowed its ECS range that researchers have not been intensely studying the issue. They have been. And most of the new research on the topic published within the past 3-4 years or so has been decidedly arguing that the ECS lies in the low end of the IPCC’s assessed range. It is just that the IPCC hasn’t been wanting to let go of the high end (and the alarming scenarios that are grounded in a high ECS), so they have underplayed these new findings.

But while the IPCC chooses to look the other way, the scientific evidence supporting low ECS continues to pile up. With the publication of significant new findings by Nic Lewis and Judith Curry that provide evidence to support a best estimate of the ECS being about 1.64°C (details here), there have now been at least 14 papers which collectively support an estimate for the climate sensitivity that lies some 40 to 50 percent below the average ECS from current “state-of-the-art” climate models—the same models used by the IPCC to provide projections of future climate change and it concomitant impacts.

In my Figure below, I summarize the primary findings from these 14 papers, all published since 2010, and compare them with the IPCC’s own estimates. Clearly, the IPCC is at odds with a large body of science. 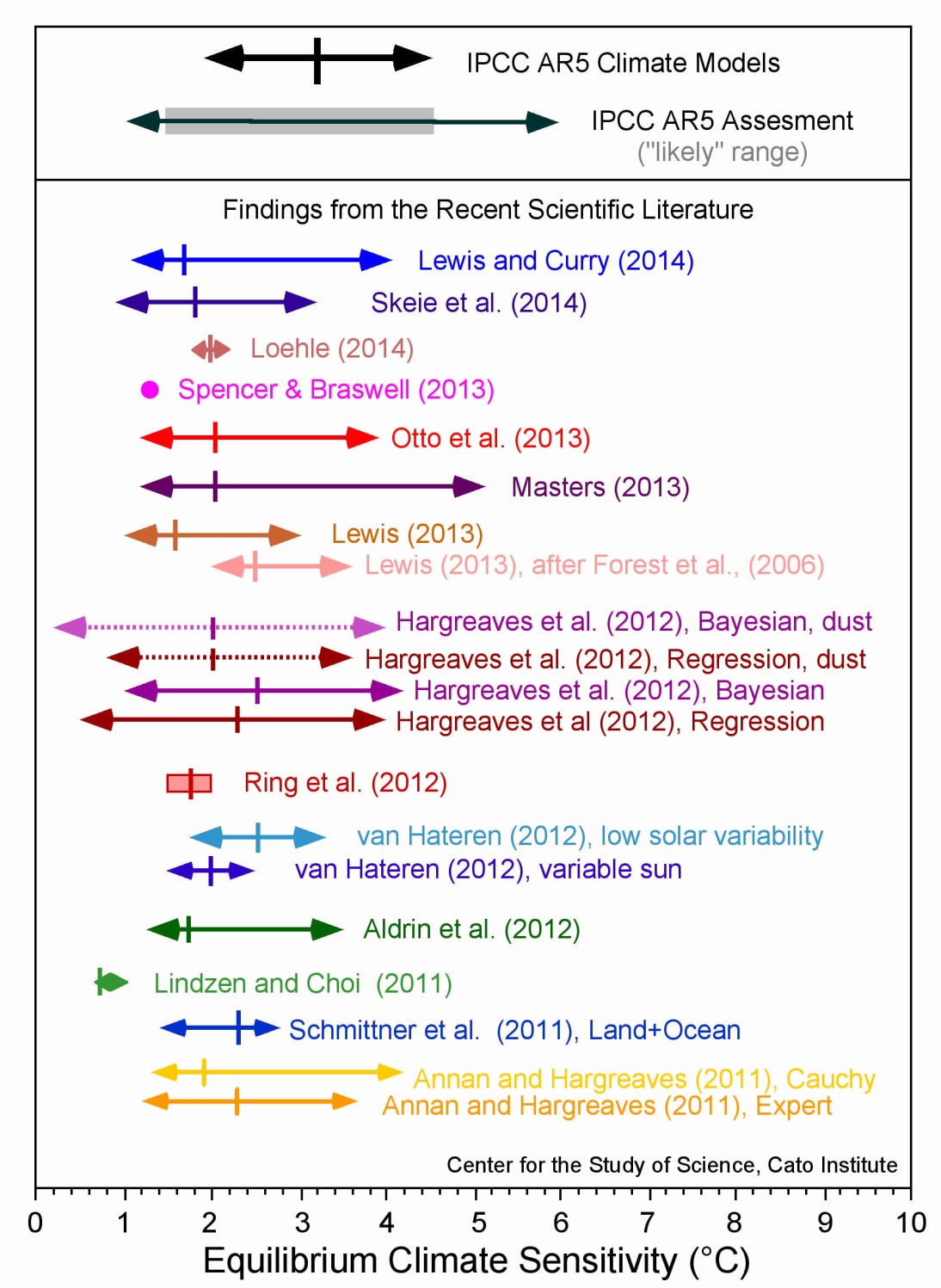 Figure 1.Climate sensitivity estimates from new research beginning in 2011 (colored), compared with the assessed range given in the Intergovernmental Panel on Climate Change (IPCC) Fifth Assessment Report (AR5) and the collection of climate models used in the IPCC AR5. The “likely” (greater than a 66% likelihood of occurrence)range in the IPCC Assessment is indicated by the gray bar. The arrows indicate the 5 to 95 percent confidence bounds for each estimate along with the best estimate (median of each probability density function; or the mean of multiple estimates; colored vertical line). Ring et al. (2012) present four estimates of the climate sensitivity and the red box encompasses those estimates. The right-hand side of the IPCC AR5 range is actually the 90% upper bound (the IPCC does not actually state the value for the upper 95 percent confidence bound of their estimate). Spencer and Braswell (2013) produce a single ECS value best-matched to ocean heat content observations and internal radiative forcing.

So what does this mean for the future?

When it comes to Nature’s role, she’ll probably continue to uptake a sizeable amount of our carbon dioxide emissions. Those that remain will likely lead to a climate change at a relatively modest pace. This is all around good news, for it means that we can focus more on expanding energy access (via fossil fuels) around the world rather than curtail our energy growth.

More time will tell if entrepreneurs need to–or even can–develope competitive low-carbon-fuel options. The former may actually spur the latter, as currently, too much of mankind’s ultimate resource—ingenuity—remains constrained by suboptimal living conditions as a result of insufficient access to our master resource—energy.

Chip Knappenberger is the Assistant Director of the Cato Institute’s Center for the Study of Science. His over 20 years of experience as a climate researcher have included 10 years with the Virginia State Climatology Office and 13 years with New Hope Environmental Services, Inc.