“The draft assessment continue[s] to miss the positive externalities associated with climate change, like the fact that we have doubled our life spans in societies that were largely powered by fossil fuels that have slightly raised mean global temperature.

Doubling the lifespan of, say, two billion people, is equivalent to saving one billion lives. This dwarfs any negative effects of climate change. Me, I’ll take 85 quality years versus 43 with a price of one degree Celsius, which I can counter simply by moving from the city into the burbs.”

“Power corrupts; absolute power corrupts absolutely,” Lord Acton wrote in 1887. The current scandals in Washington, DC remind the entire political spectrum about how dangerous concentrated power is with THE institution that possesses a legal monopoly on the initiation of force.

Power has corrupted Big Government Climate Science too. In our country, Exhibit A is the multi-agency U.S. Global Change Research Program (USGCRP) whose periodic reports on the impact of manmade climate change on America are one-sided alarmism with policy activism and bigger budgets being the goal.  Reports issued in 2000 and 2009 will be joined by a third report this year.

The Cato’s relatively new Center for the Study of Science submitted formal comments on the draft report last month. Some of the more salient criticisms of politicized science are reprinted below.

The USGCRP report is due out later this year. Will the draft report be altered to reflect the other side of the peer-reviewed (and Internet-corrected) science? The answer is just months away.

This review is a product of the Center for the Study of Science at the Cato Institute. It was largely written by Patrick J. Michaels and Paul C. Knappenberger of the Center. Additional text was supplied by Robert C. Balling, Arizona State University, Mary J. Hutzler, Institute for Energy Research, and Craig D. Idso, Center for the Study of Carbon Dioxide and Global Change.

One wonders how familiar the 240 authors of the 2013 draft National Assessment are with Karl Popper’s famous essay on the nature of science and its distinction from “pseudoscience.” The essential difference is that science only explains some things and that its hypotheses forbid others, while a theory that is not refutable by any conceivable event—i.e., one that is universally and comprehensively explanatory—is pseudoscience.

For Popper, science is characterized by risky predictions (such as gravitational lensing of light in relativity), while pseudoscience does not lend itself to such testing. His favorite examples of pseudoscience were Marxism and Freudian psychology.

This National Assessment is much closer to pseudoscience than it is to science. It is as explanatory as Sigmund Freud. It clearly believes that virtually everything in our society is tremendously dependent the surface temperature, and, because of that, we are headed towards certain and inescapable destruction, unless we take its advice and decarbonize our economy, pronto. Unfortunately, the Assessment can’t quite tell us how to accomplish that, because no one knows how.

In the Assessment’s 1,200 horror-studded pages, almost everything that happens in our complex world—sex, birth, disease, death, hunger, and wars, to name a few—is somehow made worse by pernicious emissions of carbon dioxide and the joggling of surface average temperature by a mere two degrees.

Virtually every chapter in the Assessment perseverates on extreme weather, despite the U.N.s Intergovernmental Panel on Climate Change statement that:

The Assessment is woefully ignorant of humanity’s ability to adapt and prosper in response to challenges. The quintessence of this is the truly dreadful chapter on human health and climate change.

While death, disease, poverty and injustice are all conjured by warming, there is not one mention of the fact that life expectancy in the U.S. is approximately twice what it was in the year 1900, or that per-capita income in real dollars is over ten times what it was then. It emphasizes diseases that will somehow spread because of warming, neglecting the fact that many were largely endemic when it was colder and were eradicated as we warmed a bit.

Further, it conspicuously ignores the fact that doubling the life expectancy of some 200 million Americans who lived in the 20th century is the same as saving 100 million lives. The society that achieved this powered itself on the combustion of fossil fuels. Does this community of experts understand that the number of lives that it effectively saved is orders of magnitude above and beyond it could possibly cost?

It seems, given the panoply of horrors due to start pronto, to prefer that we not have emitted carbon dioxide in the first place. Perhaps they ought to look a place that didn’t. Surely part of the $3.5 billion that the US Global Change Research Program (USGCRP) consumes per year could finance a field trip to Chad, so they can see the world without cheap and abundant energy.

And what is the purpose of this Assessment? The motto of the USGCRP says it all:

The operative word is “empower,” which is the purpose of the Assessment. It is to provide cover for a massive regulatory intrusion, and concomitant enormous costs in resources and individual liberty. History tells us that when scientists willingly endorse sweeping governmental agendas fueled by dodgy science, bad things soon happen. To borrow the meter of Winston Churchill:

Never in the history of pseudoscientific consensus will so much be done to so many by so few.

To the extent that the recent literature ultimately produces a more accurate estimate of the equilibrium climate sensitivity than does the climate model average, it means that, in general, all of the projections of future climate change given in the NCA are, by default, some 40% too large (too rapid) and the associated (and described) impacts are gross overestimates.

Our recommendation is that an alternative set of projections is developed for all topics discussed in the NCA which incorporates for the latest scientific findings on the lowered value of equilibrium climate sensitivity. Without the addition of the new projections, the NCA will be obsolete on the day of its official release.”

Rebuttal (pp. 5–6): “Much of the climate change of the past 50 years is primarily due to human activities.”

“Human activities” presumably includes a wide range of activities over and beyond emissions of greenhouse gases and other compounds to the atmosphere. Yet throughout the NCA, the observed changes are described and compared with general circulation model (GCM) recreations and projections of climate conditions—and yet these models by and large do not include the majority of the set of “human activities.”

For example, they do not include the role of irrigation in the Central Valley of California (Lo and Famiglietti (2013) or the Midwestern U.S. (e.g., DeAngelis et al., 2010; Groisman et al., 2012) which has been shown to influence precipitation, soil moisture, and run-off in downstream regions. The models do not include changes to river courses, water flow barriers, or infiltration changes which can act to increase the frequency and magnitude of flood events (e.g. Pielke., Jr., 1999).

All these changes are the results of “human activities” and impact the observed climate, yet the NCA treats most of these impacts as if they are the result of human atmospheric emissions, primarily greenhouse gases. This is wrong.

Recommendation: The NCA must include a fuller description of observed climate changes that may be caused by things other than anthropogenic global warming (AGW) and how these non-AGW influences complicate the climate change picture and often lessen the ability to identify changes causes by AGW.

Rebuttal (pp. 12–13): “The magnitude of climate change beyond the next few decades depends primarily on the amount of heat-trapping gases emitted globally, and how sensitive the climate is to those emissions.”

This is perhaps the generally most glaring problem with the entire NCADAC draft—that is, the failure to address the growing number of recently published findings that suggest that the climate sensitivity is much beneath those contained in the climate models that the projections throughout this entire report have been made.

The following figure shows the extent of the problem. 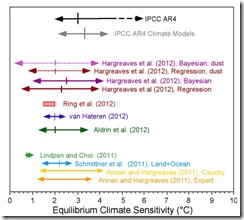 CAPTION: Climate sensitivity estimates from new research published since 2010 (colored), compared with the range given in the IPCC Fourth Assessment Report (black). The arrows indicate the 5 to 95% confidence bounds for each estimate along with the mean (vertical line) where available.

This has major implications for the projected climate changes and their associated impacts as described in the NCADAC draft report—as such, it is not an issue which can be swept under the rug. Instead, new estimates of climate sensitivity must be prominently discussed and the implications of a 40% lower equilibrium climate sensitivity incorporated throughout the report.

Recommendation: Discuss the new estimates of climate sensitivity and for each and every graphic in NCA report illustrating future projected change include a companion graphic showing the projection assuming a 40% lower climate sensitivity.

“There seems to be an implication here that carbon dioxide is primarily responsible for most of the observed warming since 1950. But this is grossly misleading.

A recent study (Bond et al., 2013) has shown that black carbon (soot) emissions have a positive forcing that is equivalent to about 70% that of carbon dioxide (about 3 times more than generally realized). Wigley and Santer (2012) show that about 10% of the warming since 1950 has been due to ENSO. Taken in combination, these results imply that CO2 is responsible for less than one-third of the warming since 1950.” (p. 11)

Agreement among models is not grounds for scientific confidence unless the models can be shown to replicate observations. As we pointed out above, this has not been shown to be the case.” (p. 24)

“It is impossible to present reliable future projections for precipitations changes across the U.S. (seasonal or annual) from a collection of climate models which largely cannot even get the sign (much less the magnitude) of observed changed correct.

“[G]reenhouse warming will warm the extreme cold of winter more than it will raise the high temperatures of summer. Greenhouse physics demonstrates that the cold, dry air of the winter must warm more than the hot, moist air of the U.S. summer. This is because the atmosphere’s two main greenhouse gases, water and carbon dioxide, absorb some of the same infrared wavelengths emitted by the earth’s surface.

When both gases are in short supply (as they were in the necessarily dry winter air prior to the major emissions of carbon dioxide) an increment of either of them creates much more warming than a similar change in the moist warm air of summer. This logarithmic response of temperature to greenhouse gases at similar wavelengths has been known for over a hundred years.” (p. 112)