“My best advice to both candidates is to just leave the issue alone. Sea-level rise does not represent a national threat, and trying to do something about it through our energy policy would cause hardship without a discernible impact along our coasts.”

With the final presidential debate set for October 22 in Boca Raton, a group of Florida “city and county officials and scientists,” with help from the Union of Concerned Scientists (UCS), have sent each candidate an open letter asking them to “address this issue” of sea level rise while they are in campaigning and debating in Florida.

This publicity play for climate crusaders will probably not work because …. facts are facts. There just isn’t much there to get away from real, here-and-now issues that have otherwise dominated most of the debates.

Prior to the first presidential debate, I offered some specific advice to the candidates on a broad range of climate change issues on the off chance that the topic may come up in some form during their first debate (it didn’t). This time around, I thought I’d take the opportunity to look a bit more deeply into the specific topic of sea level rise and anthropogenic climate change. So, in case either candidate wants to “address” the issue, they’ll have the proper background to do so intelligently.

In fact, the issue of sea level rise has already made a cameo appearance in the campaingn.

During his acceptance speech at the Republican convention, Gov. Romney got a rise out of his audience when he quipped that while President Obama had “promised to begin to slow the rise of the oceans and heal the planet” that he (Romney) promises to “help you and your family.”

As it turns out, this appears to have been one promise that Pres. Obama has kept. Over the course of his presidency the rate of rise of the global sea level has indeed slowed. The figure below shows the moving decadal rate of sea level rise as observed by a set of satellites designed to measure the changes in the height of the ocean. These satellite observations begin in 1992. After topping out during the period 1996-2005, the rate of sea level rise has been declining. The rate during the most recent 10 years is the lowest observed during the entire history of the satellite observations. At the current rate of slowing, it won’t be too long before the rate of rise has fallen back to the 20th century average (as measured by a global tide gauge network). That rate was about 1.8 mm/yr (or about 7 inches per century). 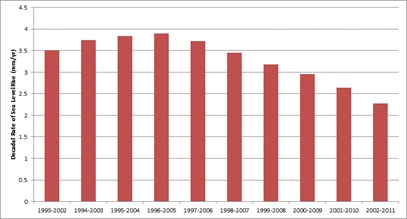 But, if credit is to be given where credit is due, none should go to Pres. Obama for slowing the rise in sea level. Instead, natural variability should receive the credit, just as it should largely (but not exclusively) receive the blame for the growth in the rate of rise during the early part of the satellite record.

A collection of recent papers in the scientific literature lends support for this.

The most recent, published just last month, is authored by a team of researchers led by University of South Florida’s Don Chambers (who, incidentally, is not among the list of signatories on the UCS letter). Chambers and colleagues have identified multidecadal cycles in the historical mean sea level observations from many ocean basins. They found oscillations with a period of about 60 years in all ocean basins except the Central/Eastern North Pacific. Chambers et al. go on to note that a 60-yr quasi oscillation has previously been identified in other earth/climate systems including ocean circulation, global mean surface temperatures, large-scale precipitation patterns, and atmospheric pressure, among other things.

Many of these cycles can be traced back hundreds of years—an indication of a natural (rather than manmade) origin. The bottom of the most recent cycle in sea level rise occurred in the early 1980s and sea level has naturally been on a general upswing since then. So before one starts to implicate anthropogenic climate change in sea level rise variations (either up or down), according to Chambers et al., one must be careful to “at least account for the possibility of a 60-year oscillation in their model.”

Another recent paper shows that, indeed human are having an ever-growing contribution to observed sea level rise—but the contribution comes not from climate change spawned by fossil fuels emissions, but rather from excessive pumping of groundwater from depth and releasing upon the surface (primarily for irrigation). Yoshihide Wada from Utrecht University in the Netherlands and colleagues calculate that this continental dewatering is responsible for some 15 to 25 percent of the current observed rate of sea level rise. Further, the rate of ground water extraction has been increasing over time, which imparts a slight acceleration to the rate of sea level rise over the past half-century or so.

Combining the natural upswing of Chambers’ 60-yr cycle with the ever-growing contribution from Wada’s ground water removal and you would expect that even without the influence of anthropogenic climate change, the rate of rise in global sea levels would be increasing. The fact that it is not (see Figure above) can only indicate that the anthropogenic climate change impacts are 1) not overly large, and 2) not making an increasing contribution.

These last two points are corroborated by a slew of studies of the snow and ice behavior across Greenland and Antarctica that have appeared in the scientific literature during the past couple of years. Recall that massive losses of ice from both Greenland and Antarctica are the featured villains in alarmist scripts of a meter plus of sea level rise by the end of this century. But, it seems that the more researchers search for the existence of these villains, the more they appear either elusive, or, more likely, non-existent.

For instance, a number of recent papers which describe the careful examination of the details of ice flow behavior across Greenland generally indicate that the glaciers there surge and retreat (from a variety of mechanisms) on timescales of years to decades, contributing to sea level rise variability, but more importantly, that a long-term sustained rate of high discharge is probably unlikely (e.g., van de Wahl, et al., 2008; Nick et al., 2009; Moon et al., 2012).

And in the past couple of months, studies of ice and snow in Antarctica suggest that the rate of snowfall there is beginning to pick up—a situation which should ultimately lead to net gains in snow/ice mass there as the climate warms (Zwally et al., 2012; Boening et al., 2012). Such an occurrence is projected by virtually all climate models and ultimately results in Antarctica contributing to a decline in sea level. Admittedly, the negative contribution to sea level rise from Antarctica is expected to be slight, but nonetheless, it means that Antarctica is not going to readily shed its ice and contribute to a large and rapid sea level rise anytime soon.

If the topic of global sea level rise is raised during the final presidential debate, both candidates ought to tread lightly. Pres. Obama should avoid talking in alarmist terms about a large and rapid sea level rise projected to take place across the 21st century—the most recent science shows those projections to be highly unlikely. Instead, the rate of sea level rise during the 21st century will probably be closer to the rate of rise experienced (and adapted to) during the 20th century. For those areas sensitive to a slight to modest sea level rise, planning to mitigate important impacts is prudent. But there is no need to panic or change our energy policy in attempt to help out (it wouldn’t work anyway, check out my analysis to see just how ineffective such action would be). And Gov. Romney should avoid associating Pres. Obama with slowing sea level rise—for there are probably many coastal communities around the country (as evidenced by the UCS letter) which would embrace a slowing of the rate of sea level rise to ease fears stoked by alarmist projections of their fast approaching inundation at the hands of our use of fossil fuels. So while sea level rise has slowed, Pres. Obama has had no hand in it.

My best advice to both candidates is to just leave the issue alone. Sea level rise does not represent a national threat, and trying to do something about it through our energy policy would cause hardship without a discernible impact along our coasts.