“Audubon’s equivocal policy on wind power ostensibly calls on wind energy developers to consider planning, siting, and operating wind farms in a manner that avoids bird carnage and supports ‘strong enforcement’ of laws protecting birds and wildlife. On the other hand, the same Audubon policy speaks about ‘species extinctions and other catastrophic effects of climate change’ and ‘pollution from fossil fuels’.”

The cover of the January-February 2016 issue of Audubon Magazine  proclaims: Arctic on the Edge: As global warming opens our most critical bird habitat, the world is closing in. In reality, it is the magazine’s writers and editors who have gone over the edge with their misleading reports on the Arctic.

This magazine is so awash in misstatements of fact and plain ignorance of history, science, and culture, that they must not go unchallenged – especially since they epitomize the false and misleading claims that have characterized far too much of the U.S. and worldwide “news coverage” of “dangerous manmade climate change.” The following analysis corrects only some of the most serious errors, but should raise red flags about virtually every claim Audubon makes from the front cover to the back page. 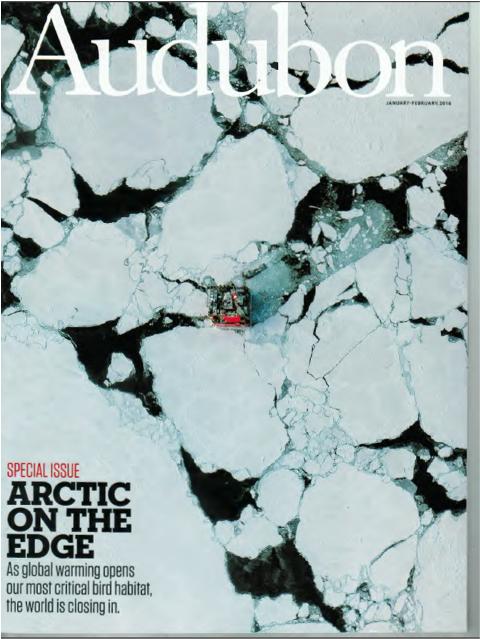 Figure 1: Cover of the January-February 2016 Issue of Audubon Magazine.

The first part of the January-February issue devotes pages to each of the countries surrounding the Arctic Ocean. The Finland page says “storms become more severe” with warming. The writers are either clueless or intentionally misleading. I’ll give them the benefit of the doubt, as they likely did not take Earth Science or Meteorology, and they certainly have no clue about atmospheric fluid dynamics. The pole to equator temperature difference drives the strength of storms. If there actually is more warming in the Arctic, that temperature difference declines, and storm strength becomes less severe – not more so.

The Russia page mentions a familiar location, the Yamal Peninsula, home of one of climate science’s most famous trees. Both the Russia page and the Finland page say that current warming is causing “soggy tundra,” which is certainly not the case in North Slope Alaska, as discussed later in this article.

The Norway page describes the Black-legged Kittiwake and speculates that warming in the Barents Sea attracts herring which feed on Kittiwake prey. The authors are clearly unaware that natural warming and cooling cycles have been occurring for centuries. In the map below (Figure 2), the green dashed line shows extensive warming in the Barents Sea in 1769, just prior to the American Revolution, as derived from the Norwegian Polar Institute’s recent examination of ship logs to determine the extent of Nordic Sea ice. During that particular warm period, ocean currents and weather conditions made Svalbard and even parts of Novaya Zemlya (where the Soviets conducted their nuclear tests) ice-free. 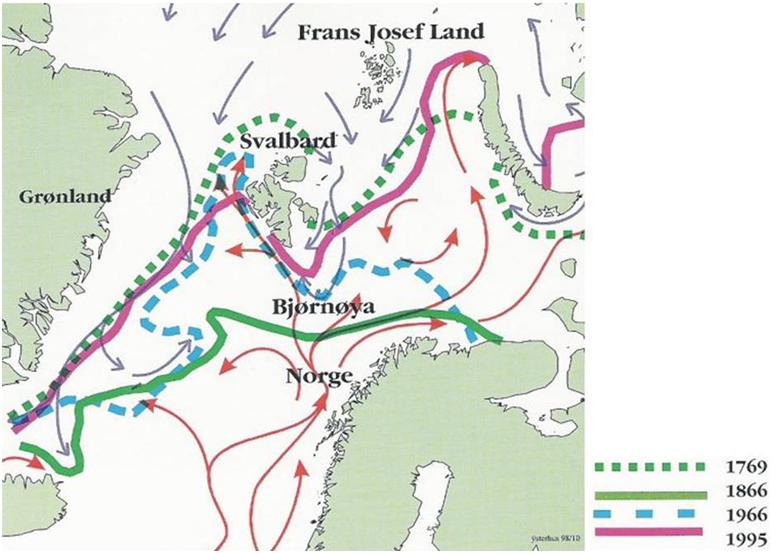 Figure 2.  Map showing maximum (April) sea ice extension in the Atlantic sector of the Arctic (Norwegian Polar Institute 2000). The map is based on a database on sea-ice extension in the area during the past 400 years, largely derived from written records found in ships logbooks.

The Greenland page features “Greenland Warming,” with an image of tundra and a glacier in the background. However, only about 80% of Greenland is ice-covered; Greenland was warmer than today during the Medieval Warm Period; and abundant new ice formed in Greenland during the past century. A recent blog post estimates that only 0.3% of Greenland’s ice was lost during the twentieth century, and enough snow and ice accumulated on the Greenland Ice Sheet that Glacier Girl, the P-38 airplane that landed there in 1942, was buried in 268 ft of ice before she was recovered in 1992. That’s 268 feet in 50 years, well over 5 feet a year of ice accumulation, much of it during a period when Earth was warming and Greenland supposedly losing ice.

The cover photograph features a Russian oil rig amid an ice-covered Arctic Ocean. It, too, is supposed to instill fear, based on the suggestion that a once solidly icy Arctic is rapidly melting. However, history shows that the Nordic ice extent has been decreasing since at least the 1860s, and probably since the depth of the Little Ice Age, around 1690. The historic data, shown in Figure 3 below, indicate that multi-decadal variability of the Nordic Sea extent (on the order of 30-45% up or down each time) has been occurring for over 150 years.

Toward the end of the January-February issue is an account of a visit to Wainwright, Alaska, an Inupiat village of about 556 natives, located on the Arctic Ocean in North Slope Borough. The native Inupiat desire to maintain their subsistence culture, which has been their tradition since their ancestors settled nearby about 13,000 years ago. 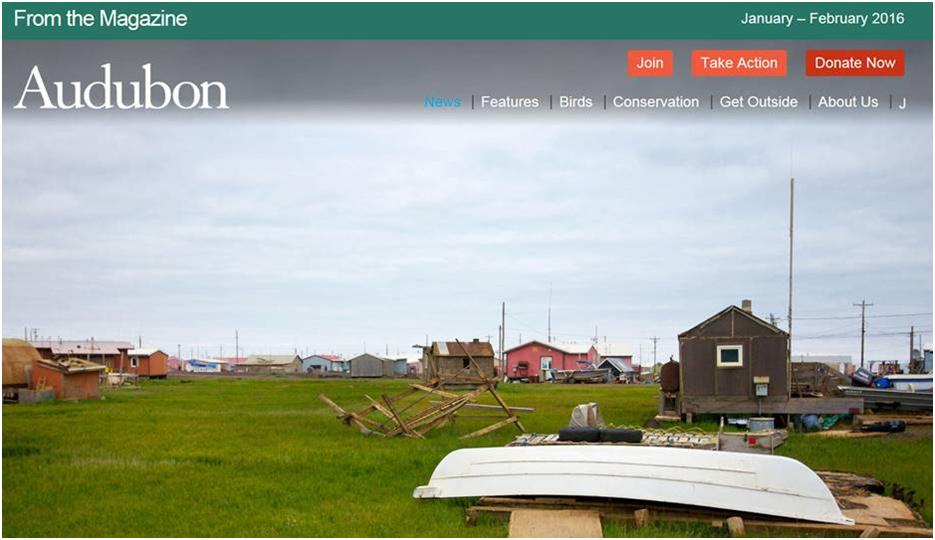 Figure 4: Wainwright, Alaska. From the online version: “The Iñupiat use portable houses and sandbags to shield themselves from rising waters and melting permafrost, but can they save their culture?”

The article on Wainwright cites a 5 degree F increase in temperature on Alaska’s North Slope, an apparent reference to a supposed increase of that amount around Barrow. However, that increase was found to be contaminated by the urban heat island effect: even in Alaska, a winter average contamination of +4 degrees F to an extreme of almost +11 degrees F. In reality, there has been little or no warming in Barrow or the North Slope, as proven by the fact that, a mere four miles east-northeast of Barrow, the Berkeley Earth measuring station shows no temperature change over the past decade.

The caption to Figure 4 (from Audubon magazine) emphasizes rising ocean waters. However, most of Alaska has falling sea levels, the result of the isostatic adjustment of northern North America. This rebound effect began with the melting of the Wisconsin Ice Sheet, as Earth emerged from the Wisconsin Ice Age and entered the Holocene between 15,000 and 10,000 years ago. The nearest tide guage to Wainwright is Prudhoe Bay, and sea-level rise there is very small, 1.20 mm/year +/- 1.99 mm/year – so small that sea levels might actually be falling there, as well.

The Audubon writers mention “melting permafrost” numerous times, but when the natives spoke in 1979, they clearly did not think this is a problem. In fact, in their own words, as recorded in The Inupiat View, the natives specifically note that melt water is scarce in the North Slope Borough. What has happened in the years since?

First, the North Slope has a summer, and from early June until mid-September air temperatures average warmer than 32 degrees F; Wainwright’s extreme maximum once reached 80 degrees Fahrenheit! During the summer months, the soil melts, creating an “active layer,” meaning the surface is not permanently frozen, but is melted part of the year. Whether there actually is a “melting permafrost,” as claimed by Audubon, can be determined only by finding the long-term trend in the thickness of the active layer.

Specialists do study this phenomenon and publish reports on it in the Circumpolar Active Layer Monitoring Network, NOAA’s annual Arctic Report Car and elsewhere. Not all the Arctic Report Cards address permafrost issues, but the 2012 edition had an extensive section on permafrost.  A quote from this edition pours freezing water on Audubon’s “melting permafrost” claim:  “Active-layer thickness on the Alaskan North Slope and in the western Canadian Arctic was relatively stable during 1995-2011,” it notes.

The literature seems rife with alarmist claims, many of which seem to be politically motivated, as is this issue of Audubon. The NOAA Arctic Reports have a heavy dose of alarmist rhetoric, especially in the boilerplate introductory sections. But the actual measurements and data present nothing that supports the alarmist polemic of the day. If you look at the data, especially long-term data, the pattern which emerges is a centuries-long slow warming, with multi-decadal fluctuations. Significant or alarming anthropogenic trends are simply not there.

Audubon should focus on real problems

The Audubon Society and its magazine should stay away from areas where they have no expertise – specifically the imagined or invented catastrophic anthropogenic global warming. Audubon’s equivocal policy on wind power ostensibly calls on wind energy developers to consider planning, siting, and operating wind farms in a manner that avoids bird carnage and supports “strong enforcement” of laws protecting birds and wildlife. On the other hand, the same Audubon policy speaks about “species extinctions and other catastrophic effects of climate change” and “pollution from fossil fuels.”

When read together, this schizophrenic policy clearly puts Audubon on the side of climate alarmism – with the loss of protected, threatened and endangered birds and bats merely a small price to pay in an effort to save the planet.

Another article shows that Audubon’s alarmist climate claims, rather than bird safety, clearly dominate president David Yarnold’s concerns, Beneath a picture of a forest fire, an editorial quotes him as saying: “Climate change is the greatest threat to birds and biodiversity since humans have been on the planet.”

This latter piece is rife with the alarmist propaganda of recent political statements: increasing drought (actual data show that drought is decreasing in the United States over the past 110 years in regions where we have temperature and rainfall measurements) … forest fires (not so, according to actual data) … species extinctions  (virtually no extinctions have occurred except on isolated islands where predators have been introduced by humans) … and flooding (nothing outside of normal experiences and variability has been documented).

Audubon needs to concentrate on saving birds and other flying creatures not from imagined or exaggerated global warming and climate change – but from very real catastrophic deaths enormous taxpayer-funded “alternative energy” machines that kill countless thousands, and perhaps millions, of them every year. These killing machines include wind turbines that chop up raptors, song birds and bats, and heliostats (installations that use mirrors to concentrate the sun’s rays) that incinerate them.

Bats pollinate crops and consume insects, but the number of bats killed has been conservatively estimated at 600,000 annually, and may be as high as 900,000.  In the pursuit of “renewable energy” the Ivanpah solar-to-electrical-energy plant in California’s Mojave Desert actually ignites birds in flight; the dying birds are called “streamers,” because they emit smoke as they fall from the sky. One report estimates that over 100 golden eagles and 300 red tailed hawks are killed yearly by wind turbines at California’s Altamont Pass, but another analysis uses detailed European studies to calculate that tens of millions of birds and bats are killed every year by US wind turbines.

Audubon needs to get some real science in its research and show true empathy for the human-caused deaths that our feathered friends face on a daily basis. It needs to focus on ending the real threats to our birds, rather than on threats that exist only in computer climate models and overly active imaginations.

Robert W. Endlich served as Weather Officer in the USAF for 21 Years. From 1984-1993, he provided toxic corridor and laser propagation support to the High Energy Laser Systems Test Facility at White Sands Missile Range. He has published in the technical literature and worked as software test engineer. He was elected to Chi Epsilon Pi, the national Meteorology Honor Society, while a Basic Meteorology student at Texas A&M University. He has a BA degree in Geology from Rutgers University and an MS in and Meteorology from the Pennsylvania State University.