“… getting 195 countries to establish the same price on carbon would be an impossibility as each country would attempt to establish a price that would benefit itself in international trade.”

One could say two former Republican secretaries of state, Messrs. Baker and Shultz, are naive and badly informed. Their proposal for a carbon tax smacks of fools rushing in.

Their proposed carbon tax is part of a proposal by the Climate Leadership Council. This “carbon tax” is a tax on CO2 emissions, based on the supposed need to cut CO2 emissions to prevent a climate catastrophe.

A “carbon tax” is fundamentally a bad proposal for several reasons.

First, Baker and Shultz propose to return a dividend to the poor, because it’s the poor who are hurt the most by any attempt to cut CO2 emissions. That is, the poor pay a higher proportion of their income for electricity and energy than do wealthier people.

This is pie-in-the-sky reasoning, because legislators will eventually see the tax as an opportunity to increase government revenues and spending. That’s the real-world outcome of any such dividend proposal.

Second, it tries to entice the Trump administration into establishing a regime of import tariffs if other countries don’t establish a tax on carbon. Without reciprocal taxation, manufacturing would flee the US for more tax friendly jurisdictions, and we would import the goods that would have been produced in our own country. (And global carbon emissions would not be reduced.)

US-side tariffs are unnecessarily confrontational, while getting 195 countries to establish the same price on carbon would be an impossibility as each country would attempt to establish a price that would benefit itself in international trade.

Third, Baker and Shultz want to begin with a tax of $40 per ton, which is higher than the Obama administration’s social cost of carbon (SCC) of $36, while proposing that a panel should review the tax in five years to see whether it should be increased.

Extreme environmentalists who clamor for cuts in CO2 emissions won’t agree to the Baker and Shultz proposal because they want money to be spent on such things as wind and solar energy and on energy efficiency. This was demonstrated in Washington State when a carbon tax was voted down, largely because extreme environmentalists opposed the proposal because it was revenue neutral and money wasn’t being spent on their pet projects.

In addition, it’s important to understand that models from which the social cost of carbon are calculated provide widely different answers depending on the assumptions used.

Three charts were selected from Dr. Kevin Dayaratna’s presentation at the 12th International Conference on Climate Change to demonstrate that:

Results from the DICE, PAGE and FUND models are shown in the graph.

The assumed discount rate has an important effect on the model’s results. The differences between a 3% and a 7% discount rate are shown in the tables below. The Office of Management and Budget (OMB) recommended a 7% discount rate, while the Obama Administration used 3% when determining its SCC of $36 per ton.

The first table below uses an outdated ECS, while the second uses a more recent ECS. Both charts show the difference between a 3% and 7% discount rate. 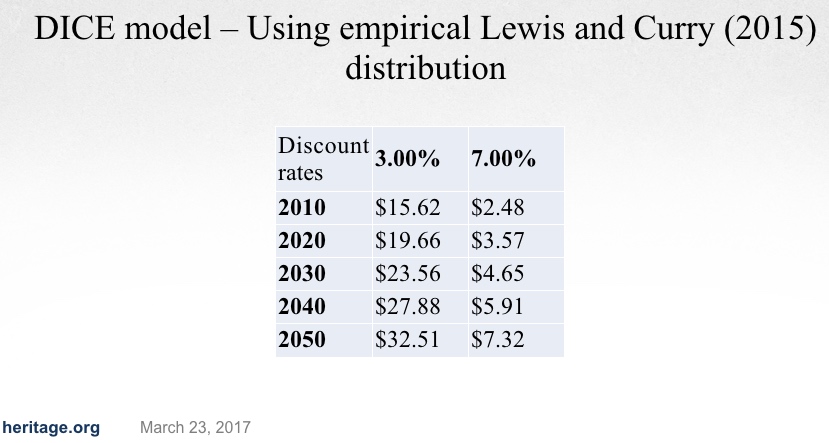 As established in my book CLEXIT: For a Brighter Future, it’s impossible to cut CO2 emissions enough to stop any climate catastrophe, even if CO2 has some effect on climate change.

Cutting worldwide CO2 emissions 50% by 2050 is impossible. Cutting US emissions 80% by 2050 is also impossible …. unless we accept returning to a lifestyle of the 1800s where horses were the main form of transportation, and air-conditioning, air planes and MRIs were unavailable. (These targets i.e., 50% and 80% by 2050, are the targets established by the United Nations and the EPA for preventing a climate catastrophe.)

These targets are impossible to meet, therefore, Messrs. Baker and Shultz are asking Americans to sacrifice their living standards for an impossible goal. Furthermore, the evidence shows that the social cost of carbon (SCC) is small and possibly negative, i.e., beneficial, indicating there is no need for putting a price on carbon.