On May 6, 2016 the U.S. Fish & Wildlife Service and Department of the Interior announced a plan that would set massive industry “bag limits” (permission or license to kill) for an eagle population that in many areas of America no longer or barely exists. In the case of the golden eagle, most of this eagle harvest will come from migratory eagles that nest outside the Lower 48 U.S. states. This is Part II of a four-part series which began yesterday.

Since 1997, when the Department of Interior’s Fish & Wildlife Service (FWS) repository first disclosed that wind turbines were a major cause of eagle deaths, wind energy has increased its deadly footprint by more than tenfold into golden eagle habitats in the western United States.

The FWS’s Draft Programmatic Environmental Impact Statement (DPEIS) created for the Eagle Rule Revision completely ignored the many thousands of eagle carcasses and autopsy records that exist in the Denver repository.  Even so, the limited and filtered data provided by the FWS does inadvertently give us a glimpse at the mortality impacts to eagles from wind turbines.

During the 1990s, Grainger Hunt conducted a seven year study in the Altamont Pass region on radio-tagged golden eagles. Its summary statement is revealing – and chilling.

“We recorded the deaths of 100 radio-tagged eagles during the seven-year study. Wind turbine blades killed at least 42, the actual number being higher because the blades occasionally destroyed the transmitter. Adding 12 electrocutions, all outside the WRA, at least 54 percent of all fatalities were attributed to electrical generation or transmission.”

Not only did these turbines kill at least 42 golden eagles; this was a documented mortality rate more than 3 ½ times greater than from electrocution. The DPEIS even states that wind turbines are a major cause of golden eagle deaths. (This statement is presented on page 99 and again with more details on page 195.)

“Overall collisions from all sources (vehicle, line strikes, and turbine blade strikes) are estimated to kill about 500 golden eagles a year.”

The latest FWS report makes it clear that the Fish & Wildlife Service relied heavily on eagle mortality information from “a data set of unbiased cause-of-mortality information for a sample of 386 satellite-tagged golden eagles from 1997–2013, to estimate the effect of current levels of anthropogenic mortality on those survival rates.” 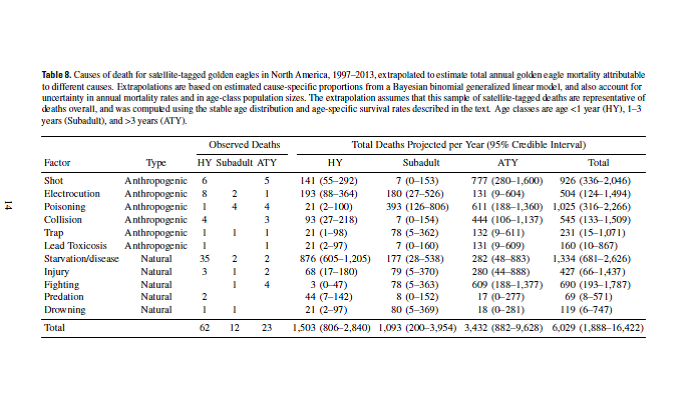 Of the 97 “observed” and reported deaths of satellite-tagged eagles, 11.3 percent (see Table) died from electrocution. Another 7.2 percent died from collisions. The Altamont Hunt study also reveals that wind turbines were killing eagles at a rate at least 3 ½ times greater than electrocution, and more than five times greater than wire strikes, vehicle strikes, and other collisions.

If we apply these wind turbine mortality rates to eagles in the Denver eagle carcass repository, we find that the FWS may have explained the cause of death for 12,000 to 13,000 of the 33,000 bald and golden eagle carcasses that the repository has received since 1997. They were killed by wind turbines!

The FWS Eagle harvest reports also make this statement: “Based on the cause-specific mortality rates analyzed, we estimated that 500 (20????ℎ quantile = 280) golden eagles are electrocuted in the U.S. annually.”

I know this because this FWS mortality figure was derived by using its grossly over-estimated population numbers. Of course, if we knew the actual number of electrocuted golden eagles shipped each to the Eagle Repository each year, we could easily clear all this up. However, we cannot get those numbers (or other accurate data) because they are viewed as proprietary, top secret information – the private property of wind turbine companies – and thus off limits to citizens, watchdogs, and even Congress.

This chart does not include all anthropogenic eagle mortality. Mortality figures for eagles taken to rehab centers from wind farms and later euthanized are missing. That is, if injured birds are recovered but cannot be nursed back to health – and must be put down – their deaths are not counted.

Even more glaring, also completely missing from this table is information on wind turbine mortality to satellite-tagged eagles. Data on this major source of mortality does exist, but it is ignored.

“Most shocking,” it notes, “several witnesses reported a mortality rate of 90% for birds mounted with Bittner’s transmitters, during one nine-month period, when experts said an 85% survival rate should have been expected. Yet Bittner reported only a 20% mortality rate during that nine month period in 2011.”

This satellite tracking information from a region in California that is inundated with wind turbines has never been released. It is apparent that the satellite-tagged eagle information included in the Fish & Wildlife Service’s Draft Programmatic EIS is highly filtered.

Without accounting for all these 386 satellite-tagged eagles, it should probably be assumed that these 292 unaccounted-for eagles may have died from wind turbines – because once wind turbines are placed in eagle habitats they become their Number One Killer. The report likewise presents no information on locations or regions where these eagle fatalities occurred, or where the satellite tagging took place.

This National Park Service map depicts the winter range habitat area for satellite-tagged migratory northern golden eagles. Those eagles are flying right into the heart of America’s rapidly expanding wind energy developments – where many of them are likely to be struck, chopped and killed by turbine blades. 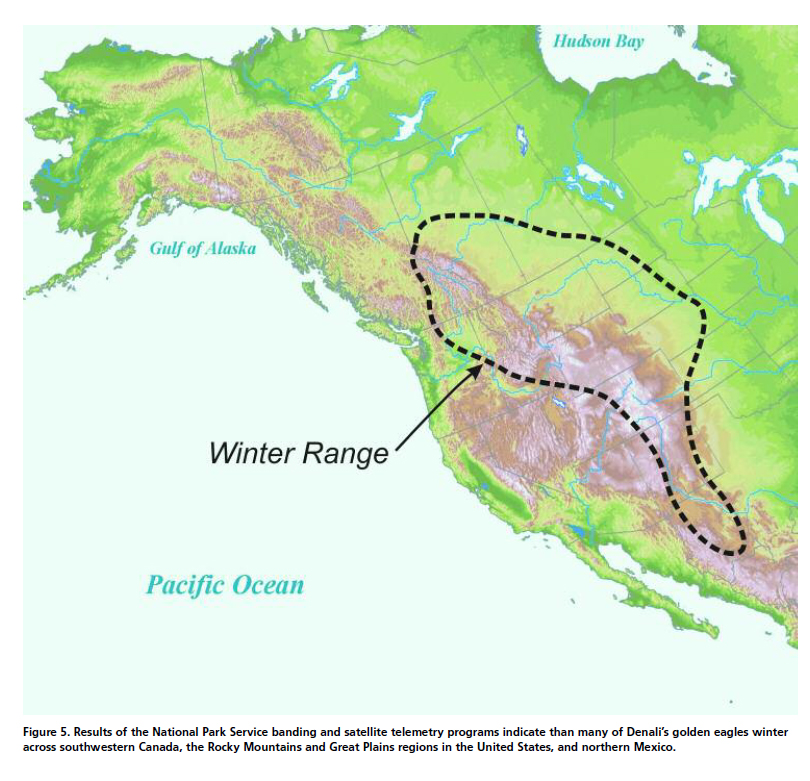 This information about migrating golden eagles is vitally important. However, it and related information are missing from the Fish & Wildlife Service DPEIS that would allow the continued and expanded slaughter of these magnificent raptors.

This huge winter range is in the midst of massive new wind energy developments in the western USA.  Also known as FWS Region 6, this area is now shipping far more golden eagle carcasses to the Denver Eagle Repository than any other region in the United States. As noted above:

On May 6, 2016, the U.S. Fish & Wildlife Service and Department of the Interior announced a plan that would set massive industry “bag limits” (permission or license to kill) for an eagle population that in many areas of America no longer or barely exists. In the case of the golden eagle, most of this eagle harvest will come from migratory eagles that nest outside the Lower 48 States.

“The Fish and Wildlife Service estimates there are about 143,000 bald eagles in the United States, and 40,000 golden eagles.”

This is an especially noteworthy statement because the FWS cannot even document 750 active/adult occupied golden eagle nesting territories existing in all of California, Oregon, and Nevada.  Northern Nevada also happens to be one of the last strongholds in the US for this species. The large majority of bald eagles are found in Alaska, and many in the Lower 48 States nest and hunt in areas that are increasingly encroached upon and threatened by large wind turbine installations.

Jim Wiegand is an independent wildlife expert with decades of field observations and analytical work. He is vice president of the US Region of Save the Eagles International, an organization devoted to researching, protecting and preserving avian species threatened by human encroachment and development. He thanks Paul Driessen for editing assistance.