“When they finish repowering Altamont with 280 more ‘bird-friendly’ machines, these killing fields will easily have five times more deadly rotor sweep than the old Altamont.”

Altamont Pass, the avian mortality capital of the U.S. wind industry since the 1980s (see “The Avian Mortality Problem” in this study), is in the news. But it is more wind-industry propaganda. The story is how safer turbines need to be installed so more birds and raptors could be saved from all those terrible smaller turbines. This hope, endorsed by the new face of Audubon, however, rests on flawed mortality studies.

For those that will not accept the fact that the wind industry manufactured these studies  to suit their purposes, here is a very clear example. The Altamont Pass study published in 2004 determined that the small old turbines were killing thousands of eagles, hawks, owls and other birds each year. In the 1998–2003 Altamont studies, of the 1,189 bird carcasses found, 90 percent were determined to be wind-farm related. In other words only about 120 of the carcasses found by researchers were dismissed as non-turbine-related.

In the later 2005–2010 study behind the repowering Altamont agreement, 6,133 carcasses (over 5 times the previous total) were found during similar searches. More than 1,500 bird carcasses (over 10 times more from the earlier study) were dismissed from the data as from non-wind-blade related.

At the bottom of the table below it is also mentioned that additional golden eagle carcasses dismissed from the data were not included. I believe the eagles mentioned here were the 21 eagle carcasses picked up by this wind farm’s secret-police known as the WRRS and declared incidental. 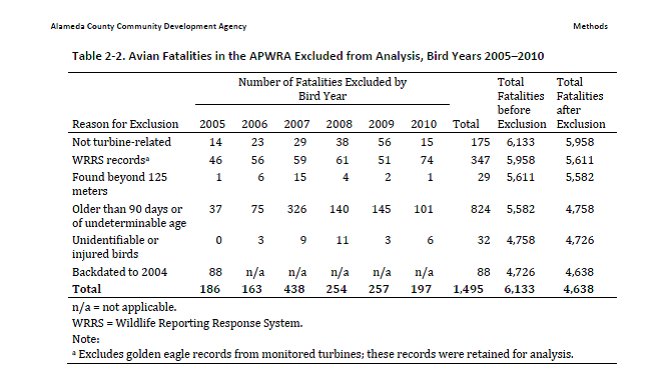 Of course none these latest Altamont stories mentioned anything about this  increase in the body count or what all this repowering is really about. Altamont is not just replacing turbines. They are expanding and adding millions more raptor killing cubic feet of rotor sweep these ridgelines. Just 100 of these bird-friendly 2.3 MW turbines now being installed by Nextera will have more combined rotor sweep than all 4800 of the old Altamont pass turbines used in the 1990’s. When they finish repowering Altamont with 280 more ‘bird-friendly’ machines, these killing fields will easily have five times more deadly rotor sweep than the old Altamont.

Nothing about these huge turbines was ever proven to be safer and raptor mortality was never shown to have been decreased by 50%. In fact the body count tells a completely different story.

Wind energy is not really important unless you are one of the many like Audubon standing in the financial receiving line from the development of this industrial blight. The reason for this is that other primary forms of energy used by society provide about 275 times the annual energy produced by wind. But this is not being reported nor is it being reported that it would take tens of millions of these turbines for wind energy to become a primary source of energy.  But even if the media could get the public to buy into the idea of all these turbines, there is not enough room, there is not the time to build them and certainly not enough money to pay for this global environmental disaster.

Part of this disaster has been our rapidly disappearing golden eagle population. Since 1997 approximately 31,000 eagle carcasses have been shipped to the Denver Eagle Repository of which thousands have come from around wind farms. The cause of death and exact locations where these 31,000 eagles were found has never been disclosed by the Interior Department, even though at one time the USFWS did admit that wind farms were a primary sources of eagle carcasses sent to the Denver Eagle Repository.

Our Interior Department along with the FWS have been protecting this industry by endorsing the wind industry’s rigged research and providing this with industry voluntary regulations. As a result most of the wind industry’s slaughter to protected species is being hidden behind their contrived research. All of these thousands of eagles picked up from around wind farms were also not just killed by the tiny turbines located in the old Altamont. They were killed by all the industry’s propeller style turbines including the bird-friendly ones.

The last honest turbine mortality study, conducted 30 years ago (1985), estimated that 6,800 birds were being killed annually by about 200 MW of installed wind turbines. (I would provide a link but this study was stripped off the internet years ago.) [1]

Since 1985 the wind industry has been routinely conducting rigged studies around their turbines. They are using carcass mortality calculations with search areas up to 20 times too small along with many other tricks to conceal their slaughter. If that isn’t enough, both wind industry and USFWS personnel are conveniently bound by gag orders with severe penalties so dead eagle and endangered species information remains hidden from the public. Because of this any discussions with FWS representatives are meaningless because they will only reveal “approved” information from above.

One Comment for “A New “Bird Friendly” Altamont Pass?”