Dear Thomas Friedman: Are You a Fascist Wannabee?

The New York Times chief foreign affairs correspondent, Thomas Friedman, has finally come out of the closet as a fascist wannabee. Harsh words, but consider the evidence.

Here is the pertinent section from his recent op-ed, “One Party Democracy” [with commentary]:

One-party autocracy certainly has its drawbacks [like the secret police and labor camps?]. But when it is led by a reasonably enlightened group of people, as China is today [that’s why they need all those internet filters], it can also have great advantages [such as locking away dissenters]. That one party can just impose the politically difficult but critically important policies needed to move a society forward in the 21st century [no need to find out what people want, just tell them what to do].

It is not an accident [or, as Marxists.org puts it: “It is not mere coincidence . . .”] that China is committed to overtaking us in electric cars, solar power, energy efficiency [not quite, China uses more than twice as much coal as the US and almost three times as much energy per unit of output, by 2030 China will generate more CO2 than the rest of the world can save, even with the most draconian “green” policies], batteries, nuclear power and wind power.

China’s leaders understand that in a world of exploding populations and rising emerging-market middle classes, demand for clean power [such as all that coal and CO2?] and energy efficiency is going to soar. Beijing [!] wants to make sure that it owns [italics added] that industry [can’t we give then Chrysler and GM, too?] and is ordering the policies to do that, including boosting gasoline prices, from the top down [Chinese gasoline prices are still below world market levels, we do not worry about that because we have markets].

Friedman quotes approvingly that renowned defender of freedom, Joe Romm, who notes that “China is going to eat our lunch and take our jobs on clean energy . . . and they are going to do it with a managed economy we don’t have and don’t want.” You are certainly right about that, Joe and Tom.

If this were just an aberration, we could forgive them. But it is not. Both Friedman and Romm (and presidential science Tsar, John Holdren) have shown themselves to be resolute enemies of free markets and choice. 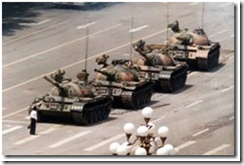 In their views we need to force wind into our power grid, regardless of the consequences (including grid instability and negative {!} prices for wind-generated electricity). All that oppose are just “standing, arms folded and saying “no” (see picture, above).

No opposition is allowed to our enlightened betters, or as Tom puts it: “a group of ideological naysayers.” So all that stuff about markets, freedom, due process, the Constitution, that’s just a bunch of obsolete ideological baggage, tovarisch?

According to Friedman and Romm, we need to rely on government policymakers who, like the boys who murder their parents and then demand our sympathy as orphans, both mandate renewable energy, and make it impossible to supply (welcome to California).

Well, we certainly know how the Chinese would come down on those issues, don’t we? Maybe Senator Feinstein is doing us all a favor by eliminating the one place that diffuse solar energy can be collected in commercial quantities. Maybe that will force California to come to its senses about just how much land and other resources renewable energy requires, and why concentrated forms of energy (gas, oil, coal, nuclear) warrant another look, even in California.

Redux: Energy for Me But Not for Thee

Friedman has previously waxed eloquent on Costa Rica’s hydroelectric based energy paradise. A brief look at the facts showed otherwise. If you happen to be a rich foreign eco-tourist (who lives here: in an 11,400 sq. ft house)

you can always go back to your Super Home and forget about the residents of Costa Rica who have no job options other than waiting on tables or cleaning up hotel rooms since the mandated renewable energy supply of the country is not reliable enough to support industry.

The arrogance and ignorance of the Green crowd has led to paralysis in power plant construction (except for wind) in the US and the UK, something that Friedman would doubtless applaud. It has also led to “gale warnings” in the UK of imminent power generation shortages, as the renewable sources fail to replace retiring coal and nuclear plants.

As we have noted on this site, there is virtually no way that renewable sources can replace current electricity or motor fuel energy modes. In fact, the determined opposition to new power plants by those, such as Friedman and Romm, who think that the government can (and should) just order up a new economy, is more likely to lead to greater reliance on older dirty plants than is a program of generation expansion based on sound economic and scientific principles.

Tom, Is the Real World Too Complicated For You?

Blackouts and shortages are likely to be a result of Green energy policies, but not a popular one. New coal and nuclear construction is not likely to surge until the lights actually go out. So what will happen, Tom?

How’s this, the U.S. has significant untapped gas resources in its shale formations. Some of this gas is already produced and more is on tap. Your team is trying to forestall new natural gas production in the U.S. Perhaps you will succeed, plunging the country into darkness (but clean blackouts). Maybe you won’t. Maybe we will see willing investors produce domestic natural gas and other willing investors build power plants, then we will have our new energy system because willing consumers will purchase the energy so supplied.

It just won’t look like the one that you want. It will be clean (natural gas is clean, you know). It will be reliable, something that cannot be said for wind and solar. It will be cheap, because it uses an abundant resource in an efficient conversion cycle. It will be sustainable, because the gas will last for a long time. And unfortunately for you and Romm and Holdren and the rest of the lemon-sucking crowd, we will use a lot of energy produced this way. We will have comfortable houses, stores and offices. We will be able to move around at will (the horror–maybe internal passports and residence restrictions will be the new Green Thing). And most of us will be able to think about things other than energy and crackpot schemes for a while.

Now that’s a bridge to the future that millions would support.