[Editor note: An under-the-radar federal energy intervention is to force fossil-fueled water heating to go electric “regardless of adverse economic impacts,” as Mark Krebs explains in this post and Part II tomorrow.]

In March of 2015, MasterResource.org published my article, Giving (tax) Credit Where Credit Isn’t Due: “Geothermal” Heat Pumps (and beyond) where I asked: “So what’s next, calling toaster ovens and electric resistance water heaters renewable?”

Apparently, the answer is electric resistance water heaters since they are now being depicted (unwittingly or otherwise) as “batteries” for thermally storing “clean” electric energy.  But toasters may not be far behind. The following article is about the latest rash of “crony environmentalism” under the guise of “deep decarbonization” through increased electrification of everything possible; regardless of adverse economic impacts.

For better or worse, Congress has delegated broad authority to the Department of Energy (DOE) to mandate minimum energy efficiency standards for most major (and many minor) residential and commercial energy consuming products. Such authority is primarily based on the Energy Policy and Conservation Act of 1975 (EPCA).

Essentially, EPCA is being continuously modified through legislative amendments; the vast majority of which confer increasing authority to DOE.  Common water heaters are no exception.  DOE first established energy conservation standards for residential water heaters in 1990. These have been periodically updated.  These start with a “Notice of Proposed Rulemaking” (NOPR).

The energy conservation standards for residential water heaters in the April 2010 Final Rule will apply to products manufactured on or after April 16, 2015. 75 FR 20112. This final rule completed the second amended standards rulemaking for water heaters required under 42 U.S.C. 6295(e)(4)(B). The standards consist of minimum energy factors (EF) that vary based on the storage volume of the water heater, the type of energy it uses (i.e., gas, oil, or electricity), and whether it is a storage, instantaneous, or tabletop model. 10 CFR 430.32(d). The currently applicable water heater energy conservation standards, as well as those that will be applicable starting April 16, 2015, are set forth in Table I.1 below.

In order to spare the reader the mathematical formulas of Table I.1 (these details are available by following the link in footnote 1), the gist of it is that the NOPR proposed that “large” gas water heaters would have to move to more efficient but expensive condensing technology and likewise, more efficient/expensive heat pump technology for “large electric water heaters.”

This NOPR didn’t sit well with most of the electric utility industry. Consequently, “they” started a ruckus about how banning electric resistance water heaters would adversely impact their “demand-side management” (DSM) programs; of which load shifting is a subset of.  DOE’s response was that “industry” should work it out with the” environmentalists.”

If you google the term “grid enabled water heaters,” you will get all the propaganda from all the “stakeholders” that were involved in negotiating an ostensible solution.  That solution was in the form of negotiated language that Congress would put into legislation so that DOE could not be charged with regulatory “backsliding,” a term that is written into statutes that prohibits DOE from decreasing the stringency of its minimum efficiency “determinations.” On April 30th, 2015, this language was enacted in S.535: The  Energy Efficiency Improvement Act of 2015

The “green” press announced this with great fanfare as follows:

“The electric resistance hot water heater had its day on Capitol Hill—and it has been victorious.”

Apparently, this loophole was insufficient: Its proponents further wanted to demonstrate that their actions were “green” and set about hiring a consultant ready to provide the requisite greenwashing services.  Subsequently, a consortium that included the National Rural Electric Cooperative Association, the National Resources Defense Council, the Peak Load Management Alliance and Great River Energy hired the Brattle Group to write a paper.  On February 10th, 2016, the Brattle Group released its study, titled: “The Hidden Battery – Opportunities in Electric Water Heating.”

To give some benefit of the doubt to the Brattle Group, they never exactly said that electric resistant water heaters should be considered “grid enabled” storage devices for renewable energy. The title of their study just implies that.  The study only states the objective is to illustrate “a plausible case in which the marginal fuel is a mix of natural gas and renewables” (emphasis added).  And that seems to be enough to make it so for most “clean energy” advocates.

The actual wording in Footnote 54 of that statement further limits this plausibility to California as follows:

For instance, in California, where there is no coal generation and nuclear units are inframarginal, natural gas and hydro compose the vast majority of marginal generating units, with some economic and manual curtailments of wind and solar as well.

At this juncture, a few observations are in order:

Fortunately (in my opinion), California and its radical energy politics is contained within the bottom half of our West Coast; extending about 200 mile inland.  Most of the rest of the country is fortunate (so far) because, increasingly, California energy and environmental policies are calling for a phase-out of fossil fuels.  For example, California Gov. Jerry Brown addressed a public hearing on October 1st, 2015 in Sacramento and made clear he will continue his war on fossil fuels by the following statement: “…We’re going to reduce and take fossil fuels out of our lives and out of the economy…”

California represents an escalation of “deep decarbonization” policies that started about 10 years ago. In late April of 2015, Gov. Brown issued an executive order to cut greenhouse gas emissions to 40% below 1990 levels by 2030; an order designed to jumpstart compliance with a 2006 environmental law signed by former governor Arnold Schwarzenegger requiring an 80% cut by 2050 compared with 1990.

In September of 2015, the California State legislature passed a bill that would require that 50% of its electricity be from renewable sources by 2030.

While Federal policies are also moving in this direction of “deep decarbonization,: their strategies and phase-out pace, at present, is slightly different.  To illustrate, the following graphics are excerpts from a November 2015 study titled: “Policy Implications of Deep Decarbonization in the United States.” 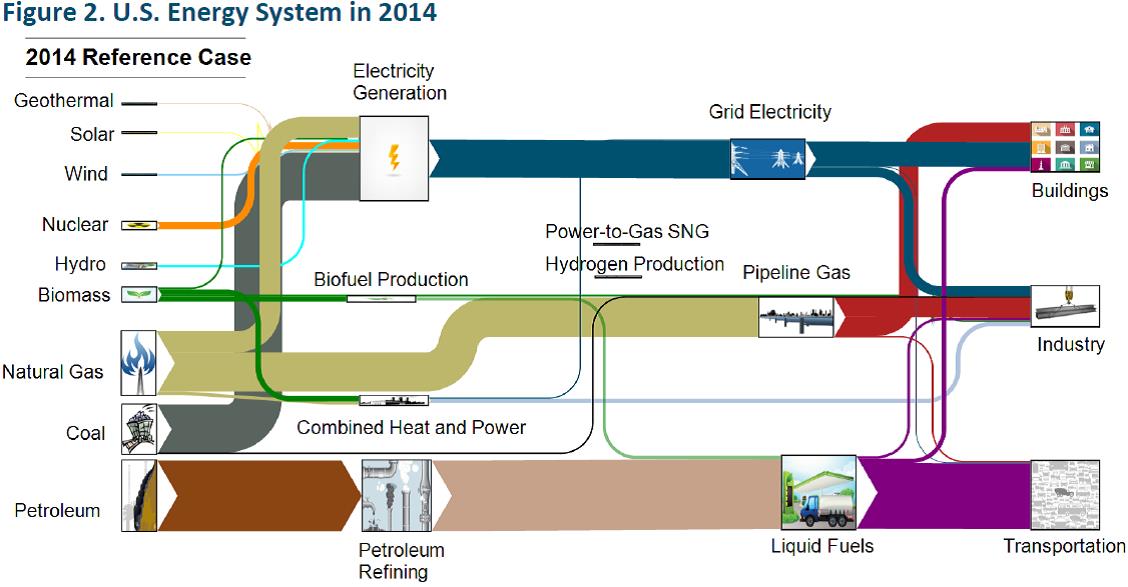 The essence of the above two figures is that gas utility customers will be eliminated by conversion of residential, commercial and industrial gas consumption into electric consumption.  The SNL News also summarized this study in an article titled: Natural gas’ role in low-carbon future is limited, study argues.  The following are excerpts of that article:

For those wondering at what cost, the following excerpts from the study claim:

And here is the “deep decarbonization for dummies” version (click to enlarge): 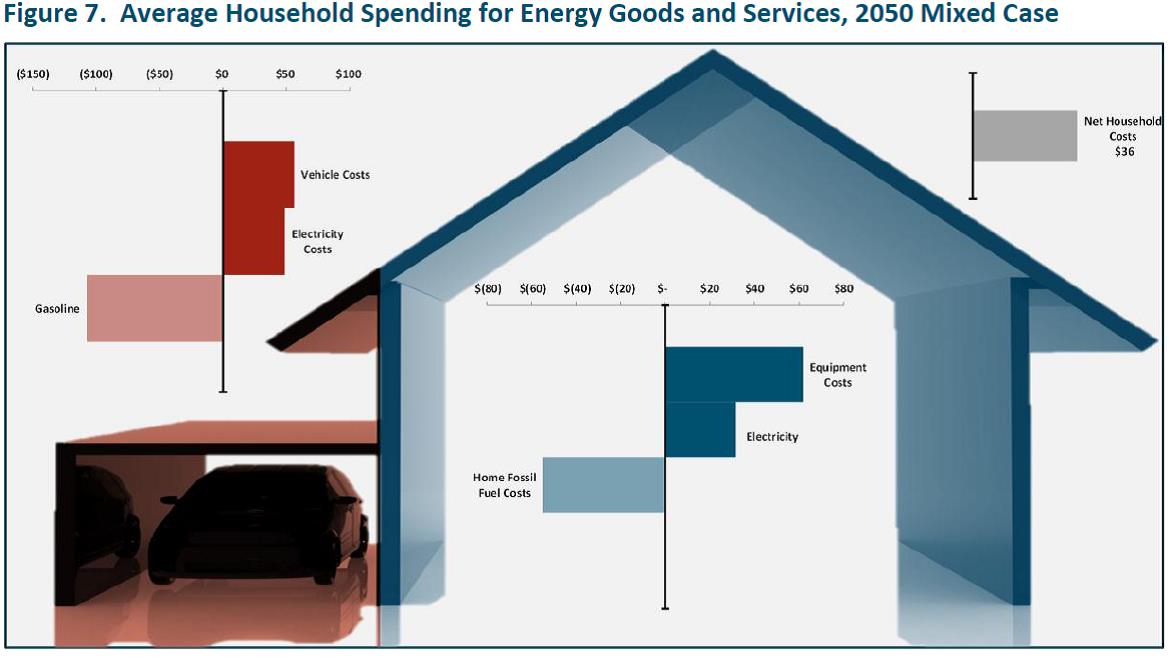 According to the executive summary for this study:

The analysis builds on results from an earlier report, Pathways to Deep Decarbonization in the United States (DDPP, 2014), conducted by Energy and Environmental Economics (E3) in collaboration with Lawrence Berkeley National Laboratory (LBNL) and Pacific Northwest National Laboratory (PNNL) for the Deep Decarbonization Pathways Project (DDPP), an international consortium of research teams studying pathways to deep decarbonization in sixteen of the world’s highest-emitting countries.

In the preface of this study it states:

On the cover of this study it shows IDDRI’s and SDSN’s logo’s together; and under SDSN’s logo, it states: “A GLOBAL INITIATIVE FOR THE UNITED NATIONS.” So there you have it; the U.S. Department of Energy and its National Labs are reporting to the UN?  Yes, I know how it sounds.  But I also know that a thin line often separates paranoia from an acute appreciation of reality.

A similar example may be taken from this year’s “CERAWeek,” which just ended. This event has been deemed to be “the Davos of Energy.”  Yet despite the fact that natural gas delivers more BTU’s to consumers (in America at least), no gas utility representatives were on the agenda.[3]

One CERAWeek” panel reportedly tried to address concerns that there may a growing lack of fuel diversity (i.e., too much “clean energy” investment in natural gas and renewables); but only in the context of electric generation. [4]  Apparently, natural gas used to power electric power plants is deemed clean; while natural gas used directly by end-use consumers isn’t.

As the saying goes, “If you’re not at the table, you’re probably on the menu;” and not only in California. Both “CERAWeek,” and the “Policy Implications of Deep Decarbonization in the United States” indicate that the direct use of natural gas appears to be firmly in the category of menu item.  These events may further indicate than an energy equivalent of “ethnic cleansing” is at least being contemplated on a national level for natural gas direct use.  Considering how this is already happening with coal, it should come as no surprise that natural gas direct use is also being targeted.