[Editor note: An under-the-radar energy intervention is to force fossil-fuel fired water heating to go electric “regardless of adverse economic impacts,” as Mark Krebs explains in this post and Part I yesterday.]

Why should electricity monopolize energy if gas-fired alternatives are more economical as determined by self-interested consumers?

If the objective is low carbon water heaters, there are more direct means of doing so. The following graphics compare the full fuel-cycle efficiencies of traditional gas water heater to electric water heaters: 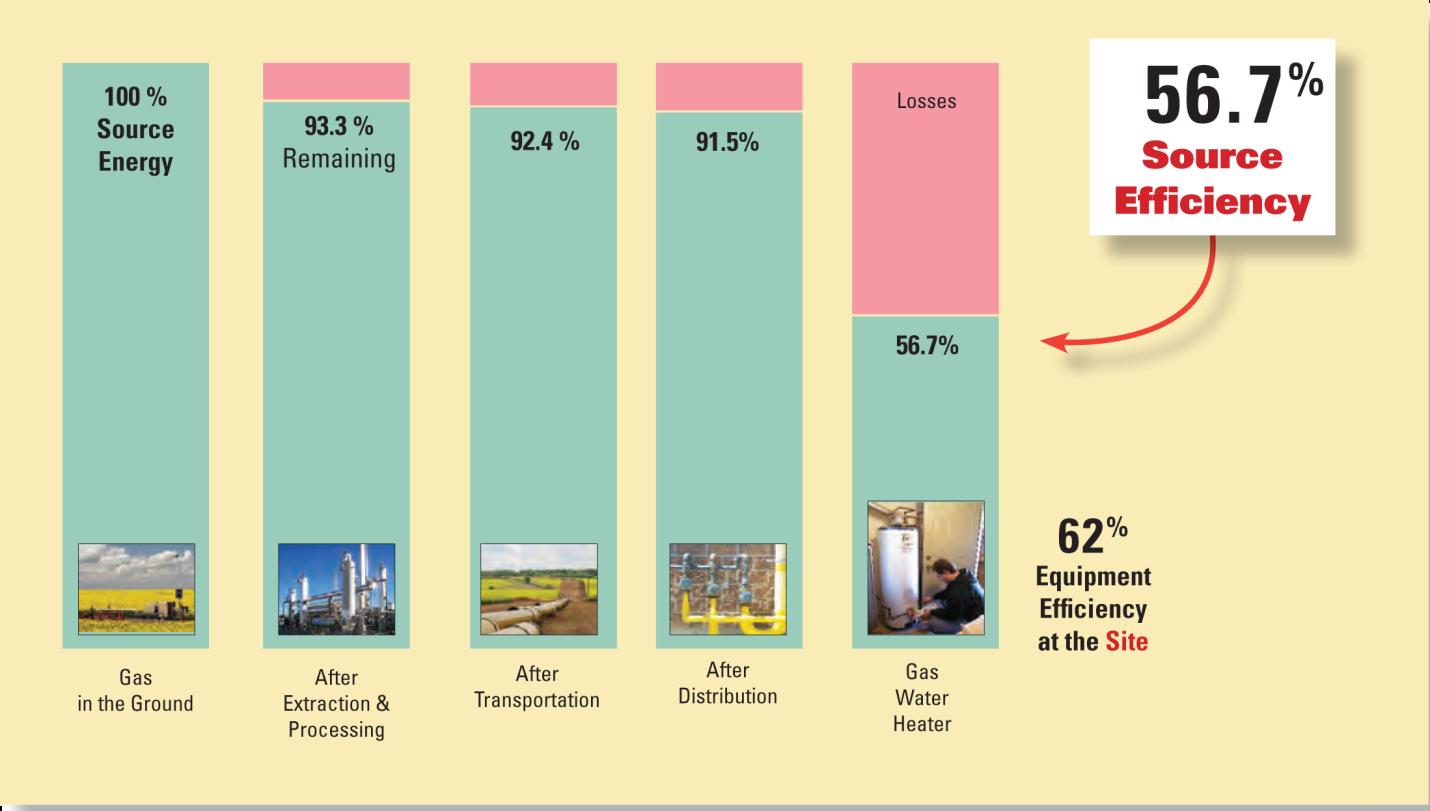 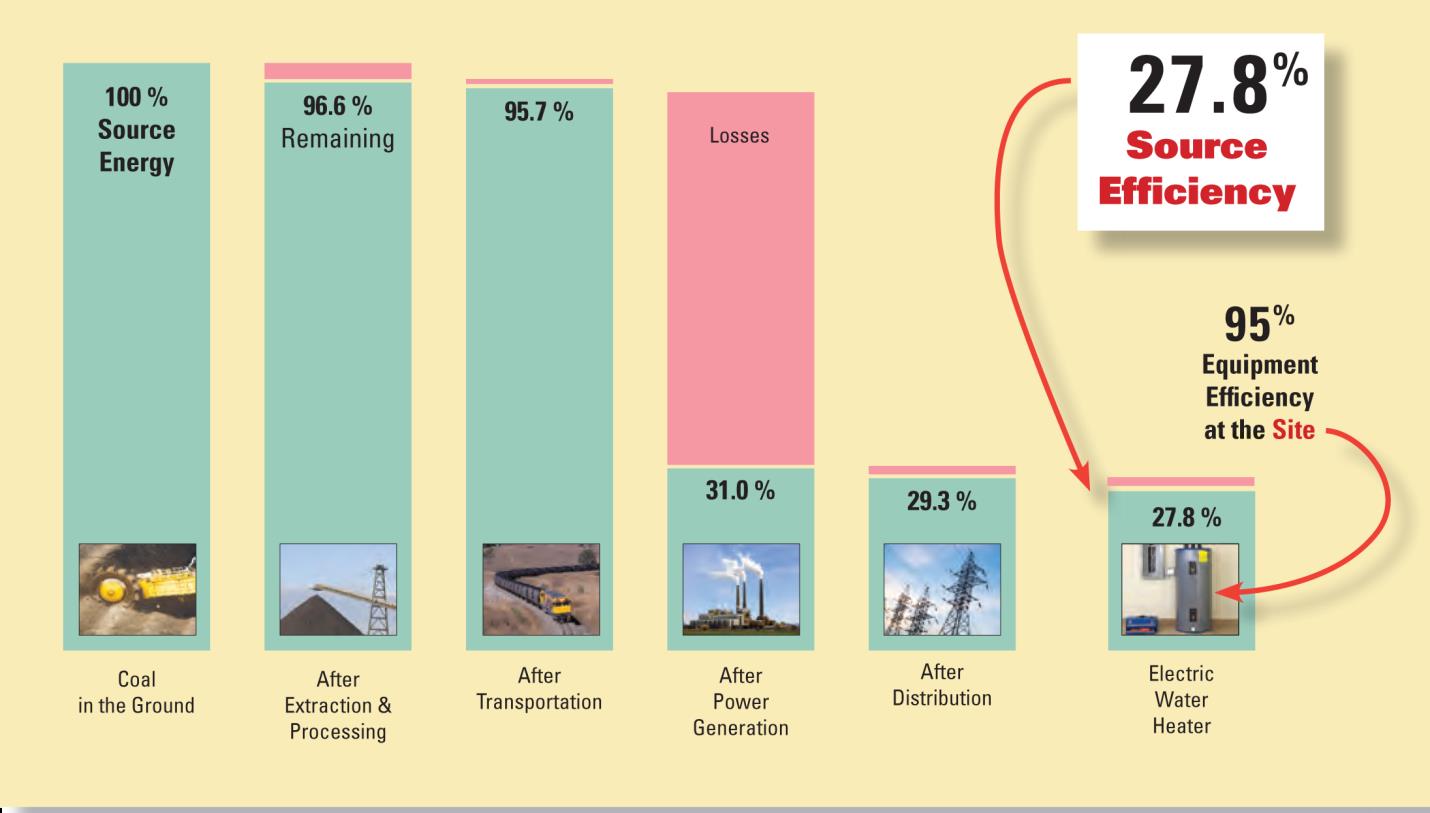 The electric utility industry prefers a site-based energy efficiency metric because it can indicates that switching to an electric resistance water heater from a gas water heater can “save” over 30% more energy.  This is tantamount to expressing a belief that energy is somehow created inside of utility meters.

Note that e-Grid emissions represent averages.  Marginal generation and emissions thereof is not in the public domain; as far as I know.  The California “duck curve” mentioned in the “Hidden Battery” study is just that: California’s. And it only limitedly depicts marginal generation for California. Things can and are very different elsewhere.  To get an idea how different emissions are on a regional basis please refer to the eGRID 2012 Summary Tables.

In order to insure that only “clean energy” electrons are used to power electric “grid enabled” water heaters (or any other “electro-technology”), two things need to happen:

Until then, if the objective is cleaner and more economical water heaters, there are also more practical/direct means of doing so.  Basically, the electric utility industry is playing both sides of global warming fence. The agenda of How to Power the World without Fossil Fuels is also an highly theoretical agenda in which electricity gains a near monopoly over energy.  I contend the electric utility industry’s main motive is classic “rent-seeking” enabled by regulatory “clean energy” machinations.  Simply put (but not too simply): “deep decarbonization” equals progressive electrification. The underlying themes of this include:

I’m not the only one that has recently noticed and written about the growth of the environmental/electric utility complex.  For example, the following article just came out in the Wall Street Journal: How Utilities Team Up With Greens Against Consumers.[2]  The following are excerpts:

It is also worth noting that the author of the above article, Travis Kavulla, is the president of the National Association of Regulatory Utility Commissioners (NARUC) and the vice chairman of the Montana Public Service Commission.

Albeit older and definitely more eclectic, the following articles also attest to these trends:

The following provides a prime example of highly biased LCOE studies: 2016 SUSTAINABLE ENERGY IN AMERICA Factbook (from page 35). This is a joint project of the Business Council for Sustainable Energy and Bloomberg New Energy Finance).  There have been a few rebuttals from bona-fide economists that have challenged the reoccurring theme that renewable electricity is at least getting close to the point of being cheaper than fossil-fueled electricity.  However, no LCOE study has ever considered the obvious truth that there are alternatives to electricity.  Never; not even once.  Even more puzzling is the fact that some natural gas (and propane) trade associations belong to the Business Council for Sustainable Energy.

Perhaps these trade associations feel it is best to capitulate to environmentalists and their electric utility allies that powering the world without fossil fuels is inevitable.  However, any potential short-term reprieve likely comes at a much higher long-term cost; that being an electrical energy monoculture.

If this sort of crony environmentalism continues to take hold, electric vehicle batteries will probably be next; along with off-peak ice storage.  In fact, this article indicates just that:  ‘A battery in every basement’: How the lowly water heater could power the smart grid.  The following is an excerpt:

Ice storage is also “very promising,” said Robin Roy, director of building energy efficiency and clean energy strategy at the NRDC. “The more we look, the more we’ll find there are opportunities.”

These advocates have come up with the wholesome-sounding marketing term “community storage” for these technologies and they apparently plan to expand this into a “National Community Storage Initiative.”  Here is what they claim in a similar article titled: Underutilized energy storage resource (its untapped potential is huge):[6]

The emission reductions of community storage will only become compounded as more consumers participate and the electricity sector transitions to cleaner fuels and generation technologies.

In December of 1996, Public Utilities Fortnightly published an article of mine titled, “It’s a War Out There: A Gas Man Questions Electric Efficiency.”  In it, I critiqued off peak “thermal energy storage” (TES).  After that article, the Edison Electric Institute had a rebuttal published that challenged me on many points; including off-peak storage.  Then I presented a surrebuttal of sorts; of which the following is an excerpt:[7]

Basically, TES systems often “crash.” Consequently, if stand-by chillers come on line to maintain air-conditioning requirements, subsequent ratchet clauses may be invoked. On account of these tendencies, some electric utilities have dismantled (or have at least overhauled) their TES programs. For example, in a recent San Diego Gas & Electric’s general rate case, the DSM uncommitted forecast recommended for SDG&E by the CEC in the ER-90 process only includes TES installations for new construction in the high-rise office sector. “TES was deemed non-cost-effective in the other markets.” When tested again by SDG&E in August 1991, “TES was found to not be cost-effective in any sector.”

What I apparently didn’t get into far enough at the time is that thermal energy storage (and especially ice storage) uses more energy than conventional systems.  Any decent air conditioning engineer should know and be able to explain why.  Perhaps NRDC should consult some of these.

While ice storage might be something new in terms of NRDC’s collaboration with the electric utility industry, NRDC has been collaborating with EPRI to promote electric vehicles for at least 10 years as evidenced by this joint study: “Environmental and Societal Benefits of Electrifying Transportation.” At this rate, electric resistance toaster ovens may not be far behind.  After all, bread can be toasted on a “grid enabled” basis “off-peak” and stored for later consumption.

Joe Romm, currently of Climate Progress, once advised me (when he worked for DOE) that “I” (meaning the natural gas utility industry) “could have it all if I play my cards right.” What he really meant was that my industry should fully support  DOE and its fuel cell program. But I don’t want it all.  I want energy diversity and a strong economy while minimizing unnecessary environmental degradation.  After all, as they say: “it’s for the children.”  And I want my children to be able to get a good job, then move out of the house and stay healthy.