Rapid Loss of Arctic Ice: But Where is the Warming?

The numbers are in for this year’s summer sea ice extent in the Arctic Ocean. By most measures the ice loss in 2011 came in a close second to the current and still record holder, 2007.

But the failure to set a new record for the least amount of summer Arctic sea ice observed during the satellite era (which begins in 1979) has done little to alter the overall picture of what is going on there. Summer sea ice has been in decline in the Arctic Ocean since, conservatively, the mid-20th century, and it has been picking up steam. And sea ice declines in the Arctic are now pretty clearly discernible in the other seasons as well. (What has been going on around Antarctica is a different story).

But for those who lose sleep at night over the implications of the Arctic sea ice loss to both the local, regional, and global environments, there is a silver lining. The rapid loss of sea ice, coupled with the slowed rate of global temperature increase, is a potential indicator that the earth’s climate sensitivity may be lower than climate model determinations. If true, this means less warming per future unit of greenhouse gas emissions.

Arctic sea ice records get a bit muddied prior to about the mid-20th century. At the scale of millennia, the Arctic was probably ice-free, or nearly so, during the summers for a period of several thousand years about 6,000 to 8,500 years ago (see here for example).

Temperatures in the Arctic have actually cooled a bit in the time since, although certainly there has been shorter period variability transposed upon the overall cooling trend. For instance there was a probably an Arctic-wide warm period during the early 20th century that may have lead to a sizeable reduction of sea ice at least in some parts of the Arctic.

But since the late 1950s, the Arctic has been warming and the sea ice there has been in decline. And during the past 5 years or so, the decline has hastened, primed by the sharp drop in 2007, which saw a lot of multi-year ice lost, replaced by easier-to-melt first year ice. Ice loss in 2011 nearly equaled that of 2007. The way things are going, I would expect record or near record ice loss in the years to come. Typical projections are for the Arctic sea to become ice free, or nearly so, fairly routinely within a few decades. 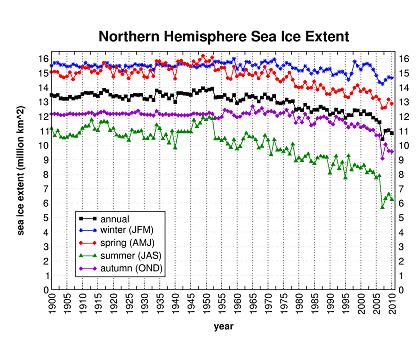 Figure 1. Observed Arctic sea ice extent in various seasons of the year. The data since the mid 20th century, and especially since the late 1970s, is more reliable than the earlier data (image source: Cryosphere Today).

But loss of summer ice in the Arctic is not the irreversible “tipping point” that it is often made out to be. Several newly-published scientific studies have shown that the Arctic sea ice can rebound fairly rapidly if conditions there change to become more favorable for ice development (See Andy Revkin’s coverage of recent developments). 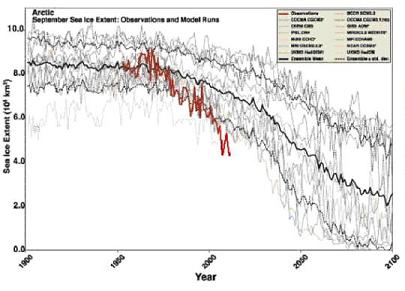 One reason for this is that some portion of the recent ice loss is thought to come about through the processes involved with natural variability. For instance, atmospheric/ocean circulation variations in recent decades have resulted in more ice being pushed out of the Arctic Ocean and into the north Atlantic (for more on this and other potential contributors to the loss of Arctic ice, see this discussion over the Judith Curry’s blog).

But the net result is that the observed rate of ice loss is about twice as great as climate model projections.

And, this turns out to have important implications.

Is Climate Sensivity Too Large?

The loss of Arctic sea ice epitomizes, for some, positive feedbacks in the climate system. It is conceptually easy to understand, and goes something like this: Rising temperatures melt a bit of Arctic sea ice, the loss of sea ice (a highly reflective surface) exposes sea water (a much less reflective surface) which adds to the warming, the added warming melts more sea ice, and so on.

In fact, this is the example that Al Gore used in An Inconvenient Truth to illustrate positive feedbacks in the climate system.

So how, pray tell, does the more-rapid-than-projected loss of Arctic sea ice portend a lower climate sensitivity?

But as we all know, climate models are grossly overestimating the observed warming. And one possible reason is that the climate sensitivity—the amount of global warming given an effective doubling of the atmospheric concentration of carbon dioxide—as determined by climate models, is too high.

Of course, all else has probably not been equal. There are other presumably non-modeled processes that have also been influencing the course of global temperature over the past decade. These include changes in solar output, the precise timing of internal climate variability (like El Niño/La Niña occurrence, swings of decadal/multidecadal natural oscillations), poorly understood and recently identified climate components (like variations in stratospheric water vapor and stratospheric “background” aerosols) and perhaps even changes in anthropogenic aerosol emission rates (although I find this proposed mechanism to be highly suspect).

Taken together, this is a pretty long list of reasons why the climate models are failing to perform the task of accurately capturing the evolution of global temperatures over the past decade and several decades prior to that. That climate models have been overprojecting actual warming rates over the long term is clearly shown (Figure 3) in the results of a new paper by Ben Santer and colleagues, which pretty well reflect the results of very similar work that I have been involved with for several years now (imitation, it seems, is the sincerest form of flattery) 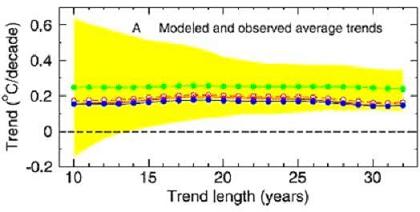 Figure 3. A comparison between modeled and observed trends in the average temperature of the lower atmosphere, for periods ranging from 10 to 32 years (during the period 1979 through 2010). The yellow is the 5-95 percentile range of individual climate model projections, the green is the model average, the red and blue are the average of the observations, as compiled by RSS and UAH respectively (adapted from Santer et al., 2011).

A greater than expected loss of Arctic sea ice is only adding to climate models’ woes (see here for more details and a quantification of this impact).

The bottom line, is that the world and its climate is a complex place and that today’s state-of-the-art climate models still struggle to capture reality in their fairly wide range of projections. And reality is what ought to be the target of their efforts.

As long as reality remians elusive, then what climate models provide may be of scholarly interest, it does little to help guide our actions.