Why the EPA is Wrong about Recent Warming

[Editor note: The author has added an update at the end showing why it can be reasonably argued that anthropogenic greenhouse gases may be responsible for less than half of the observed warming since the mid-20th century]

Back in December, the EPA announced that it had determined that greenhouse gases released by human activities “threaten the public health and welfare of current and future generations.” This “Endangerment Finding” is the first step toward EPA’s issuing regulations aimed at restricting GHG emissions in the U.S.

Unfortunately for the EPA, a major pillar of support of the Endangerment Finding—that “most” of the “observed warming” since the mid-20th century is from greenhouse gas emissions from human activities—has been shown by recent scientific research in major peer-reviewed scientific journals to be largely in doubt.

Add this result to the list of problems that seems to grow longer with each passing day as more IPCC gaffes are uncovered and Climategate emails are parsed. One has to wonder just how long it will be until the EPA is challenged to reconsider its Endangerment Finding.

The basis for the Engangerment Finding is contained in the EPA’s Technical Support Document for Endangerment and Cause or Contribute Findings for Greenhouse Gases under Section 202(a) of the Clean Air Act (TSD). The TSD does not describe any new, independent research carried out by the EPA (because they did not undertake any), but instead largely summarizes the findings of the Intergovernmental Panel on Climate Change (IPCC).

One of the key statements (from page 2 of the Executive Summary of the EPA’s TSD) is this—a simple mimic the IPCC AR4 finding:

As I shall show, this statement is no longer tenable.

First off, here is my take on what the EPA/IPCC is claiming.

For “most” I’ll assume “more than half.” For “observed increase in global temperature” I’ll assume the linear least-squares regression trend through the most recent version of the global temperature dataset compiled jointly by the U.K.’s Hadley Center and Climate Research Unit (dataset HadCRUT3). There are other global temperature compilations (most notably from NASA and NOAA) and while there are certainly notable differences over the short run, over the longer term, they are very similar. “Since the mid-20th century” I’ll take as 1950. The EPA defines what it means by “very likely” in the Table I reproduced below—they mean “with a 90-99% probability.” And for “observed increase in GHG concentrations”, I’ll assume the greenhouse gases explicitly mentioned by the EPA (CO2, CH2, N2O, HFCs, PFCs, SF6).

Likelihood refers to a probabilistic assessment of some well defined outcome having occurred or occurring in the future, and may be based on quantitative analysis or an elicitation of expert views. When authors evaluate the likelihood of certain outcomes, the associated meanings are:

As to what the “observed increase in global average temperature since the mid-20th century” has been, I present Figure 1—the annual HadCRUT3 global temperature record from 1950 to 2009. The trend line has value of 0.117°C/decade which amounts to a total temperature increase of 0.702C over the 60 years from 1950. 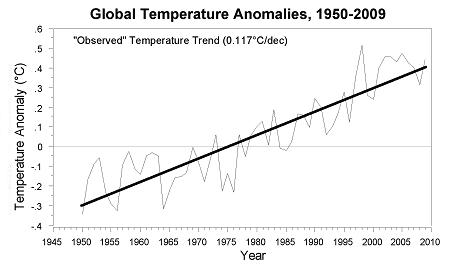 So that’s what we are starting with. The EPA is 90 to 99% certain that at least 0.35°C of warming in the extant (“observed”) record is from GHG emissions from human activity.

Now, let’s see what happens when we start to factor in recent findings.

Corrections to the “Observed” Record

First off, about a year after the IPCC released its AR4 report (from which the EPA took its statement), David Thompson and colleagues published a paper in Nature magazine titled “A large discontinuity in the mid-twentieth century in observed global-mean surface temperature.” In it, they documented how a change in observing practices before and after World War II produced a cold bias in the sea surface temperatures that were incorporated into the compilations of global average temperatures (see here and here for more details). Thompson et al. were unable to correct this bias (so it remains in the extant “observed” global temperature histories) but suggested that:

The adjustments immediately after 1945 are expected to be as large as those made to the pre-war data (~0.3°C), and smaller adjustments are likely to be required in SSTs through at least the mid-1960s, by which time the observing fleet was relatively diverse and less susceptible to changes in the data supply from a single country of origin.

The U.K.’s The Independent newspaper reproduced a graphic (from by the Climate Research Unit) that generally illustrated what the correction to the dataset may look like when it is finally applied.

The Independent’s chart basically shows what the Thompson et al. paper described—about a +0.3°C correction after about 1945 slowly declining to zero by the mid-1960s.

Figure 2 shows what happens when I apply this correction to the “observed” data in Figure 1 and then re-calculate the temperature change. The overall warming trend declines from the “observed” rate of 0.116°C/decade to a “corrected” rate of 0.092°C/decade. So EPA’s “observed increase in global average temperatures since the mid-20th century” has now dropped from 0.702°C to a “corrected” value of 0.552°C and 21% of EPA’s increase from “anthropogenic GHG” increases has now vanished, lost to errors in the observed data. 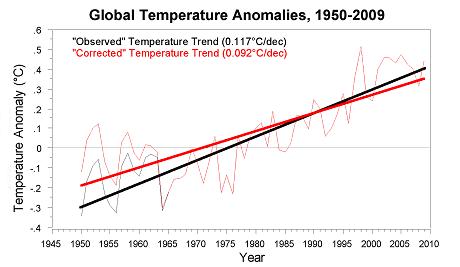 Now consider the results of a paper published just a few weeks ago in Science magazine by Susan Solomon and colleagues. They report that variations in the water vapor content in the lower stratosphere (apparently largely unrelated to GHG changes) have a large influence on the rate of global temperature change for periods of a decade or more. In fact, since 1980 (the start of the data analyzed), an overall increase in stratospheric water vapor content as been responsible for perhaps 15% of the overall temperature increase.

It is impossible from Solomon et al.’s analysis to know what went on prior to 1980, so, for lack of any other guidance, I’ll assume that no changes took place (or, that the net change was zero) from 1950 to 1980. I’ll then back the 15% warming influence from stratospheric water vapor changes since 1980 out of the “corrected” data in Figure 2. The warming I am left with is shown in Figure 3.

Now the EPA’s “observed increase in global average temperatures since the mid-20th century” has dropped from 0.702°C down to 0.486°C—and about 31% of increase from anthropogenic GHGs is gone. 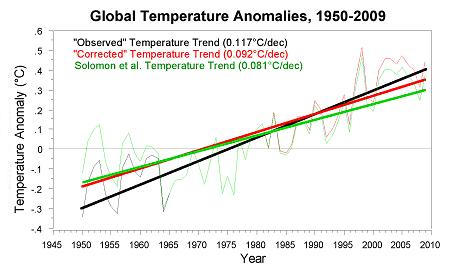 Finally, consider the results from Ramanathan and Carmichael published in Nature Geoscience last year. These researchers reviewed the scientific understanding of how black carbon aerosols (aka soot) warm the earth’s climate. Black carbon is not a GHG. Black carbon warms the earth by directly absorbing reflected solar radiation and also by darkening the surface of snow and ice when it is deposited there (and enhances melting). Ramanathan and Carmichael determined that in toto black carbon has been responsible for about 25% of the overall warming. 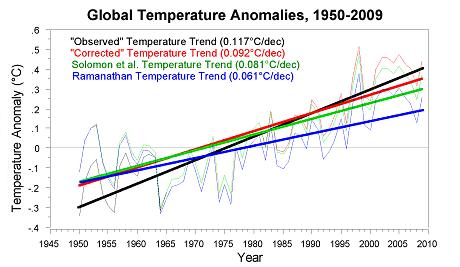 The remaining warming—that which possibly could be caused by anthropogenic GHG increases—now stands at about 0.366°C—or just 52% of the EPA’s “observed” increase.

And I have only included the best estimates from Solomon et al. and Ramanathan and Carmichael. In fact, both studies include a range of estimates. Had I used the low end of the ranges, the remaining warming from GHGs would have been quite a bit less than 50% of the “observed” warming.

Also, I used a pretty conservative “correction” based on Thompson et al. Others contend that the “correction” should be larger, and in and of itself could invalidate the EPA/IPCC “most likely” description.

And, I didn’t include any warming from things such as urbanization, land-use change, site changes, or other natural variability—which have been by some studies to have a detectable (warming) impact.

So, if we take what the best science gives us, we find that pretty close to half of the warming that is currently indicated by the extant global temperature datasets may be from influences other than anthropogenic greenhouse gas increases—perhaps a bit less, perhaps a bit more.

Heading back to the EPA’s Description of Likelihood Table (above) we find that instead of “very likely,” probably the most apropos descriptor is found a couple of lines down, the one that encompasses a 33 to 66% probability—or “about as likely as not.”

Somehow, I think that if the EPA had written:

that EPA’s justification for their Endangerment Finding would “very likely” have been considerably less compelling.

IPCC mistakes, Climategate perversions, and now new major scientific findings all demand the same thing—that EPA reconsider its Endangerment Finding as the validity of its scientific underpinnings is badly in need of update and reappraisal.

I have had several inquiries into what the remaining warming would look like if I incorporated the potential effect of non-climatic warming influences (e.g., urbanization, other landscape changes, instrument changes, network quality, etc.). I ran through a middle-of-the road estimate in Comment#6, that I’ll now move up into the post.

It is hard to know what a middle-of-the-road estimate from non-climatic influences on the land surface temperature observations may be. Brohan et al. (who developed the HadCRUT3 record) estimate the influence to be 0.005°C/decade. McKitrick and Michaels (2007) on the other hand, estimate it to be nearly 50% of the trend in the land record. This probably defines the range on influence.

Since the land only makes of 30% of the planet, each of the above estimates must be roughly reduced by 70% to be applied to the global record (details may vary). Or, respectively, 0.002°C/decade and 15%.

Working through the rest of my calculations (i.e., stratospheric water vapor and then black carbon) using the new 0.085°C/decade baseline leaves a trend of 0.056°C/decade that could potentially be from anthropogenic GHGs, or a total potential temperature rise of 0.337°C—which is 48% of the current “observed” value—or less than half of the current “observed” warming from the mid-20th century.

I’ve created a new, simplified chart to show the total effect of all the non-GHG adjustments (that I considered, perhaps there are others) to the “observed” temperature history. The red line in the Figure below is the original warming trend as contained in the most-up-to-date “observed” temperature record, and the blue line is the remaining (“adjusted”) trend after all non-GHG influences have been removed. The remaining trend is just 48% of the original trend. In other words, it can be reasonably argued that anthropogenic GHGs could be responsible for a minority of the observed warming since the mid-20th century. 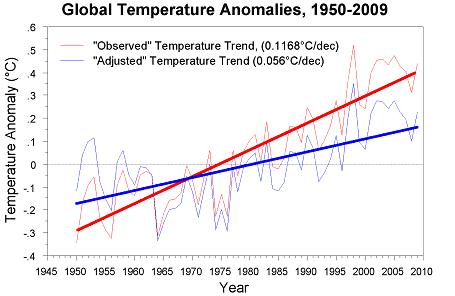 Update Figure. Global temperature history, 1950-2009. The red line in the Figure is the original warming trend as contained in the most-up-to-date “observed” temperature record (HadCRUT3), and the blue line is the remaining (“adjusted”) trend after non-GHG influences have been removed.