The Buzz about Antarctica

The blogosphere has been much abuzz about the implications of the finding reported last week in Nature magazine that Antarctica, on average, has warmed over the past 50 years.

An author of the report explained to the Associated Press that their findings were especially significant because “contrarians” had latched onto the idea that Antarctica has been cooling, and thus “bucking the trend [of global warming].” The “contrarians” meanwhile, caught somewhat off-guard, mounted a seemingly confused defense focused on attacking the methodology employed to reach such a conclusion rather than the actual contention itself.

I’ll try to cut through the spin and confusion to get at the real implications of the study (which turn out not to be terribly exciting).

A research team led by University of Washington’s Eric Steig used what they deemed to be a more intelligent method for interpolating the temperature patterns between the few long-term observing stations sprinkled across Antarctica than other previous attempts at producing a continental temperature history (there are only about 15 observing stations with data back into the late 1950s across continent a bit larger than the United States). The complex statistical technique related the temperature patterns from the observing stations to temperature patterns revealed at higher spatial scales by satellites which had been collecting data over Antarctica for the pat 25 years or so. In this way, the researchers gained a better understanding of what the sparse surface observations may reveal about the broader patterns of temperature across the continent. They assumed these relationships to be valid in period prior to satellite observations and thus they developed a higher resolution picture of how the temperature varied across the continent from the late 1950 to the early 1980s than had previously been possible. All in all a reasonable approach to the problem—but likely not the final word on the matter.

The end result of Steig et al.’s analysis was that they documented a greater temperature increase from 1957 to 2006 than had previously been established. But, that said, almost all previous analyses did find some degree of warming in Antarctica starting in the late 1950s (the time when consistent temperature observations first were recorded). So, in this sense, the new findings just firmed up our general understanding, they certainly didn’t buck any standing trends (Figure 1).

The cooling (or, at least, lack of warming) in Antarctic was not supposed to have begun in the late 1950s, but rather the 1970s. In other words, it has been understood that there has been little, if any, warming averaged across Antarctica as a whole for the past 20 or 30 years. This is not to say that no areas of Antarctica have warmed during that time, just that when averaged together across the continent, there has been little overall temperature change. The new Steig et al. results basically confirm that understanding as well (Figure 1, again). 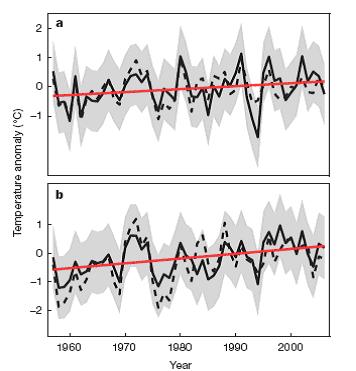 Figure 1. Temperature trends across East Antarctica (top) and West Antarctica (bottom) as determined in the new study by Steig et al, for the period 1957-2006. There has been an overall warming in both sub-continental regions since the start of the record, but little net temperature change during the past 20 to 30 years (image from Steig et al., 2009).

The bottom line here is that the new findings reported by Steig and colleagues do more to shore up our basic understanding of how large-scale temperatures have evolved across Antarctica during the past 50 years than they do to topple any long-standing beliefs.

The hubbub surrounding them arose from the contention that the results undermined a long-held skeptic position accompanied by a confusion by the skeptics as to exactly what their long-held position actually was (or should have been).

I think that once everybody calms down, this incident will prove to be much abuzz about nothing.

(In case anyone is wondering, climate models are all over the place when it comes to what their expectations are of the temperature behavior of the Antarctic region for the past 50 years. So you can’t confidently use Antarctica’s temperature history to either confirm or refute climate model behavior in general. Into the future, as the ozone hole wanes and the greenhouse effect waxes, there is a general expectation that Antarctica will warm—so more robust comparisons can potentially be made a few years down the road.)