“Dirty” Waxman-Markey: How Small Can Small Get?

“Binding emissions targets for the developing nations are out of the question.”

As I demonstrated in my analyses last week (here and here), the impact on global temperatures of U.S. actions to reduce greenhouse gas emissions pursuant to the Waxman-Markey climate bill (which called for a whopping 83% reduction by 2050) was close to nil. Or more precisely, about 0.05°C (0.09°F) by the year 2050, expanding to maybe 0.1°C–0.2°C by the end of the century, depending on, among other things, which future emissions course is assumed as the baseline.

And as the negotiations continue into the specific details of the proposed legislation, the emission reduction schedule has begun to slip—and so too does the potential climate impact.

So what is the temperature impact of a dirty Waxman-Markey bill versus the “clean” bill’s 0.05°C/0.09°F? (Hint: divide by half and even half again.)

If you can’t tell the different lines in Figure 1 apart, join the club. The original Waxman-Markey emissions reduction schedule, as aggressive at it may seem, does so little to alter the projected course of future global temperatures, that dirtying up the bill makes the original next-to-nothing impacts even less (if that is possible). 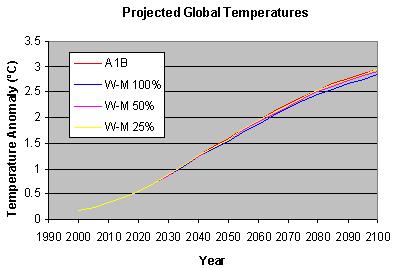 For those interested in the details, I present the global temperature “savings” resulting from my three Waxman-Markey versions in Figure 2. The temperature “savings” are computed as departures from the temperature projections from the IPCC’s original A1B scenario. Here you can see the projected Waxman-Markey climate impact in all its glory. By the year 2050, the “clean” version reduces projected global temperatures by 0.044ºC (or ~3% less than the rise without the legislation), the “dirty” version gets you about half of that, or 0.022ºC (~1.5% less), and the “dirtier” version saves half of that again, or 0.011ºC (<1% less). By century’s end, you don’t do much better–the temperature reduction amounts to, respectively, 0.112ºC (0.20ºF), 0.046ºC (0.08ºF), and 0.013ºC (0.02ºF). 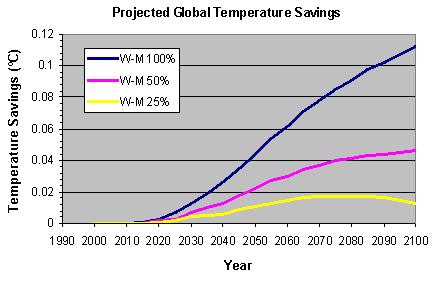 None of these numbers represents a scientifically meaningful effect on the future of the global climate or on any impacts that may result from future climate change.

The conclusion of all this: the U.S. has no role to play in the projected course of global climate through domestic emissions reduction alone. And as the above quotation by Eileen Claussen of the Pew Center on Global Climate Change makes clear, those in know are forecasting that the U.S. would have to go it virtually alone.

This leads to the undeniable result that for the U.S. to have any meaningful impact in mitigating projected global temperature rise, it must come from our contributions to helping other countries reduce their emissions. But with record U.S. budget deficits and the oil, gas, and coal sectors roaring in the developed world, nil will certainly remain nil.

The only way this will change is with the development of new technologies, as existing ones are not up to the task, despite many promises from their advocates.

So while we work to develop a silver-bullet solution, turning attention from (ineffectual) mitigation to adaptation might be a strategy whose time has come.