Climate and Agriculture: We’re Not Dumb

University of Washington atmospheric scientist David Battisti and Stanford co-author Rosamond Naylor have an article in this week’s Science magazine that is making headlines across the world.

Why? Because they contend that we are fast heading towards a global food crisis as a result of a future temperature rise projected to accompany increasing atmospheric levels of greenhouse gases.

However, the paper itself is long on rhetoric and short on supporting science, with the conclusions based largely on improper reasoning.

They assume that people will sit idly by and slowly perish as the climate changes around them, doggedly clinging to outdated and failing agricultural practices instead of adopting new crop varieties and farming techniques as the climate warrants. This is known as the “dumb farmer scenario.”

But, farmers aren’t dumb. The development and adoption of new technologies and crop varieties is the primary reason why crop yields have increased many fold over the past century.

Yet, Battisti and Naylor think that it soon will. 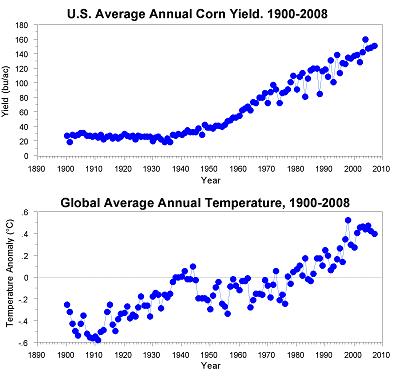 But again, Battisti and Naylor also think that as heat waves become more frequent huge numbers of people will die as a result. This is a “dumb people scenario.”

Again they are dead wrong. They cite the high mortality associated with the European heatwave of 2003 and want us to believe that the future holds such heatwaves as commonplace and therefore people will continue to die year after year in mass. But such a claim lacks any scientific grounding. In 2006, another heatwave struck Europe and fewer people died than expected (Fouillet et al., 2008). Why? Because people adapted. Across the United States, far fewer people die from the heat in hot places, where summer heat is commonplace, than die in cold places during an unusual heat wave (e.g., Davis et al., 2003). So as heat becomes more common, we should expect fewer deaths. Again, people adapt to the prevailing conditions—we don’t want to die.

Performing a study that fails to incorporate known responses and then touting the results as a valid portrayal of the future is not science, but science fiction.

To read more about the various shortcomings of the Battisti and Naylor article, check out the excellent article “Science Fiction Down on the Farm” posted at World Climate Report.