On Tuesday, the National Audubon Society released a report “Birds and Climate Change,” which interpreted an average northern shift of the over-wintering range of a large collection of North American bird species over the course of the past 40 years or so. Audubon decided that this range shift was due, in part, to “global warming.” Therefore, it was bad and action must be taken to avert it:

It is the complete picture of widespread movement and the failure of some species to move at all that illustrate the impacts of climate change on birds. They are sending us a powerful signal that we need to 1) take policy action to curb climate change and its impacts, and 2) help wildlife and ecosystems adapt to unavoidable habitat changes, even as we work to curb climate change itself.

What the Audubon Society failed to mention was that contained within the data from its own report was that the numbers of bird species with increasing populations topped those with population declines by a margin of more than 2-to-1. In other words, “global warming” has been a net benefit for the Audubon’s collection of North American bird species. Which leaves you wondering, why would we want to take action that could result in a countering of that trend?

The Audubon Society’s report describes the analysis of 40 years’ worth of data-collecting under their Christmas Bird Count (CBC) program. For three weeks of each year around Christmas time, volunteers from around the country conduct bird counts within their designated observing area. The methodology of the CBC program is designed so that the data collected can be used in subsequent historical analyses aimed at tracking the patterns of bird species (and their numbers) both spatially and temporally.

The latest analysis of this CBC dataset was geared towards assessing the patterns of the winter range of 305 North American bird species and whether or not they were related to temperature conditions. It turns out that over the past 40 years (from the early 1960s to the early 2000s) the average winter range of the collection of bird species has moved northward by about 40 miles. Since the early 1960s were a cool period and the early 2000s were warm one, the temperature rise during this period seems a likely culprit. Audubon highlighted the 20 fastest moving species as well as the trace of January average temperature across the United States in the figure copied below. 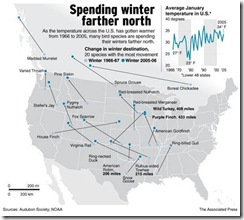 Figure 1. The movement of the centroid of the winter range of the 20 North American bird species with the greatest range shift, along with the history of the U.S. average January temperature, 1966-2005 (inset) (figure source, http://www.audubon.org/bird/bacc/index.html)

Which is all well and good—North America’s bird species are adapting their behavior to a changing climate. So what’s the problem?

Actually, Audubon was largely at a loss to find one, instead trying to convince us that evidence of climate change is reason enough to try to stop it—apparently Audubon knows what the “best” climate is for birds.

Hidden in the recesses of their “Birds and Climate Change” report (their Appendix 1) is a table of various statistics that were calculated for each of the 305 bird species analyzed. Included in the large table among the statistics for things such as how far each species has moved northward and how far it has moved inland, was the value (and statistical significance) of the overall population trend for each species. Funny that, in a report describing how “global warming” is impacting bird species, Audubon didn’t highlight the ultimate test of bird species’ health—the overall population trends.

They reason becomes clear when you start looking over the numbers.

This is strong indication that, in net, North American bird species have seemed to improve their overall condition during the past 40 years—a time of winter warming.

One potential reason is that most of these bird species tend to spend their summers further north than they do their winters—migrating between their preferred winter and summer ranges in the spring and fall. Birds don’t migrate for the fun of it, but to find the resources to meet their needs—food, nesting grounds, competition avoidance, etc. As migration is a particularly taxing time on the birds, the less distance they have to migrate the better. That they don’t have to travel as far south in the winter is a good thing. And since, over the past 40 years, summer temperatures across North America have warmed much less than winter temperatures, it is quite likely that the total average distance that North America’s bird species have to migrate each year has declined (and the populations have grown).

Audubon wants you to sign their petition pushing for action on climate change based upon the findings of their bird report—not because of findings of harm, but simply of effect:

Our recently-released Birds and Climate report clearly shows that climate change is affecting birds – and our world – now. For the past 40 years, as our climate has warmed, birds have shifted their winter ranges further and further north. This ecological disruption is yet another wake up call that we must act quickly to solve the climate crisis. The birds’ northward movement is another signal that climate change is here and action is needed now.

We need global warming legislation that will help birds and wildlife survive what is coming by protecting their habitats and will reduce global warming pollution 80 percent by 2050 to avoid the worst impacts of a rapidly changing climate. Tell your lawmakers where you stand on global warming by signing our petition.

Don’t you think it would be decent of the National Audubon Society to highlight to their potential petition signers that they would be lending their support for legislation which is aimed to combat an effect that is leading to an overall improvement in the general health of North America’s bird species?

[Update: Audubon has now included a FAQ about their analysis on their website which includes a discussion of the population increases–predictably, they find no good news in those numbers!]

Q: Didn’t some species fare really well over the past 40 years (even showing population increases)?

A-Yes, many of the species that moved north and inland increased in population at the same time. But it would be short-sighted to focus on what may appear to be short-term gains. Where food or habitat is available, species may do well in the short term, but ultimately the need to adjust to changing climate conditions can put species in peril in a variety of ways. Some will move into areas where an unusually harsh winter will still bring conditions they cannot survive. Others may be unable to find food or suitable habitat (especially if the healthy habitats they need, like grasslands) are already being decimated by overuse, pollution, and other threats. Even species that fare well amid the changes are likely to force out other, less adaptable birds, taking a long-term toll on ecological health and all it supports.