Back in January of 2009, I reviewed the implications of a then just-published article in Nature magazine that was billed as shedding important new light on some aspects of the long-term (since the late 1950s) temperature history across Antarctica.

The article, by Eric Steig and colleagues, described more warming taking place over a larger portion of Antarctica than had previously been recognized. The implication was that the temperature rise across Antarctica was not lagging behind the rest of the world and thus “not bucking the trend of global warming” as apparently some “contrarians” were claiming.

Now, that result must be tempered, as a new paper is forthcoming that improves upon the analytical technique developed by the Steig team and finds significantly less warming across the continent as a whole (about 50% less), and a different geographical pattern of temperature changes across Antarctica—results that fit more closely with the existing (that is, pre-Steig et al.) perception of what was going on down there. Basically, when a more correct analysis was performed, our understanding of what has been occurring in Antarctica has been firmed up, rather than being badly shaken—Antarctica, on average, has warmed a little bit over the past 50 years, with the largest and most significant warming being concentrated in the regions around the Antarctic Peninsula, rather than spread somewhat evenly across the continent (as the Steig et al. result showed).

But, perhaps the most interesting part of this story is that the new analysis grew from the blogosphere.

Soon after the Steig et al. article was published, it was being examined and critiqued on various blog sites. Among the criticisms was that the statistical technique pioneered by the Steig team was improperly implemented and that the published results were influenced by these inaccuracies.

An effort grew from these blog discussions to develop a better implementation of the methods and the results revealed a rather different picture of the patterns of temperature evolution across Antarctica than did the original Steig et al. paper (Figure 1). 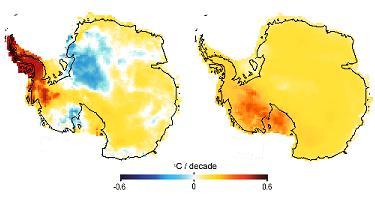 Figure 1. Patterns of temperature changes over Antarctica (1957-2006) based on the new, updated analysis (left) and as reported by Steig et al. (right) (figure source: The Air Vent)

The Blogosphere at its Best

Now, this type of thing happens fairly frequently in blog space—a spirited critique of a scientific publication. But what doesn’t happen very frequently, is that the blog discussions are formalized and submitted to a scientific journal. And in this case, not only were they submitted, but after a lengthy and extremely thorough review process, the new, improved findings have been accepted for publication in the Journal of Climate—a very well-respected scientific journal.

This shows the utility of blogs at their best—initial informal critical discussion that hits upon a legitimate and important point of science, which is then formalized, submitted, and accepted into the peer-reviewed scientific literature, thereby making a much more permanent, citeable and, in fact, more widely accessible, contribution to the scientific knowledge base.

To read more about how all this came to pass, please visit Jeff’s blog where some of the authors describe all that was involved from start to finish and include a preview of their results.

I wrote in my original MasterResource article “[The Steig et al. paper was] all in all a reasonable approach to the problem—but likely not the final word on the matter.” The new paper by O’Donnell et al. pretty much confirms this, and adds important new words to the story. Lead author Ryan O’Donnell describes it like this:

In my opinion, the Steig reconstruction was quite clever, and the general concept was sound. A few of the choices made during implementation were incorrect; a few were suboptimal. Importantly, if those are corrected, some of the results change. Also importantly, some do not. Hopefully some of the cautions outlined in our paper are incorporated into other, future work. Time will tell!

This is the way science is supposed to work. I am delighted to see the blogosphere opening the doors to scientific contributions to a wider audience. I hope this trend continues—science will be the better for it. But, importantly, to achieve this contribution, it requires a great deal of effort, persistence, and fortitude that extends far beyond a comment thread on a blog somewhere. I encourage more people who really are interested in making a lasting impact to grin and bear it and make the effort—it is an effort that can be rather painful, but which provides great satisfaction in the end, and best of all, it keeps science moving forward.

So blog away, but when you hit upon something that you think is scientifically important, take the time to write it up and send it in to a journal—the end result could be rewarding for all of us.