A Warm Year? Or a Cool Decade?

I was recently pointed to an amusing post by Joe Romm over at Climate Progress last week about the “unprecedented global warming during the past year.” Joe pointed out that the earth had apparently warmed rapidly (“20 times [greater than] what most climate models have projected we should be experiencing”) during the period January 2008 through January 2009.

It turns out that Joe was only joking—not about the temperature rise, but as to whether or not it was comment-worthy.

As I’ll show you, the global temperature behavior during the last year isn’t particularly noteworthy, but that during the past decade or so, it is starting to become interesting.

Apparently Joe was engaged in a tit for tat with Anthony Watts who announced a little over a year ago on his WattsUpWithThat blog that the period from January 2007 to January 2008 was particularly notable for the cooling that took place. And, no doubt that Anthony was engaging in a little tit for tat of his own for all the many reports of this or that extreme weather event being tied to global warming.

Both Joe and Anthony very well know that 12 months is far too short a period of time over which to adequately assess whether or not the global temperature change is proceeding according to (climate model-dictated) plan.

What Joe didn’t much go on about, was that the global temperature behavior during the past 12 months was not very indicative of the behavior since the turn of the century—a time during which it is widely recognized that the rate of global temperature rise has slowed (compared to the preceding several decades). To see how the observed global temperature trend in over recent years fits into the range of model expectation for this period, I plot in Figure 1 the set of all 96-month temperature trends for the first two decades of this century projected by the 22 climate models used in the latest IPCC climate change assessment report. 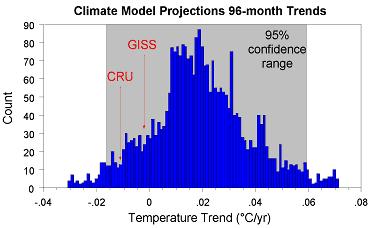 Figure 1. Collection of all 96-month trends in global surface temperatures projected by the 22 climate models (run under scenario A1B) used in the IPCC’s fourth assessment report for the first two decades of the 21st century. Observed trends indicated for the 96-month period ending in December 2008 in the Goddard Institute for Space Studies (GISS) and the Climate Research Unit (CRU) temperature data sets.

Depending on which global surface temperature dataset you use, the observed trend during the past 96 months lies very near the low side of the 95% confidence range of the collection of climate model projections.

What this means, is that the observed rate of global temperature change has been quite slow during this time, and while perhaps not totally unprecedented in the realm of model projections, at the very least, it is starting to become pretty unusual.

And with early indications that a La Niña event is brewing in the Pacific (an event which spawns generally cooler conditions across large areas of the earth), 2009 may tack on 12 more months to this slower-than-expected rate of global warming. If that proves to be the case, folks will have to start taking a hard look at climate model formulations (if they aren’t already) as they seek an answer as to why actual conditions aren’t being well-captured by the models.

Which brings me around to a recent editorial in the New York Times which was trying to make a case that the IPCC’s fourth assessment report, published in 2007, was already out-of-date— “The 2007 assessment established a base line of [climate change] expectation, but it is already looking outdated. From all over the globe, in bits and pieces, data are accumulating that suggest we may have already left behind the world of possibilities portrayed in the panel’s report.”

Based on my analysis above, I would say that the Times was definitely onto something—global temperatures are rising at a pace so slow as to begin to raise questions as to whether they are being modeled correctly and are starting to “suggest we have already left behind the world of possibilities portrayed in the panel’s report.”

Oh? What’s that you say? The Times was arguing that the IPCC report was outdated because climate change was proceeding at a rate that was worse than expected?

That’s quite a stretch considering that virtually the opposite is the case.

That leaves me to ponder as to what could be behind the Times being so behind the times?