Waxman-Markey: Inconsequential for Sea-Level Rise, Too

The American Clean Energy and Security Act, better known as the Waxman-Markey Climate Bill, has been shown to be completely ineffective at slowing the rise in global temperature that is projected by climate models to accompany mankind’s continued reliance on fossil fuels for energy production. And this, despite the bill’s mandated cut-back of U.S. greenhouse gases emissions by a whopping 83% below 2005’s levels by the year 2050. As the primary purpose of the bill is to mitigate “global warming” and any follow-on impacts, Waxman-Markey, on its own, would seem an abject failure.

If you need any more proof, consider the bill’s effect on projected sea level rise. Recall that the specter of rapid sea level rise is one of the pillars of alarmist claims for impending climate catastrophe and calls for immediate action. But even a full implementation Waxman-Markey would do virtually nothing to slow the projected rate of rise. Using a middle-of-the-road future emissions scenario as a baseline, the emissions reductions that would be mandated in the U.S. under the provisions of the Waxman-Markey bill would result in reducing the sea level rise by mid-century by less than 0.1 inches, and the reduction would still be less than 0.5 inches by century’s end.

Waxman-Markey simply is not a climate bill.

To drive this point home further, in this post, I’ll follow up my earlier analysis of Waxman-Markey’s impact (or, more accurately, lack thereof) on the projected course of global temperature—an analysis in which I showed that by the year 2100, the temperature “savings” from the bill would be less than one-third of one degree Fahrenheit—with the details of an analysis of the bill’s impact on the total amount of projected sea level rise. As with temperature, the bill’s impact on future sea level rise is so small as to be scientifically meaningless.

I use the same basic techniques that I previously used to compare temperature projections with and without the Waxman-Markey emissions limits to compare sea level rise projections.

The Intergovernmental Panel on Climate Change (IPCC) has developed a set of scenarios to describe how the future world may develop and use energy. Each scenario not only describes potential population and wealth evolution of various country conglomerates across the 21st century, but also how levels of greenhouse gas (and aerosol) emissions change accordingly. I calculate how the future emissions within two of these IPCC scenarios would be altered if the U.S. deviated from the IPCC assumptions and pursued the Waxman-Markey emissions schedule instead—a schedule which calls for a 3% reduction (from the year 2005 emissions levels) in U.S. greenhouse gas emissions by 2012, a 20% reduction by 2020, a 42% reduction by 2030 and topping out at an 83% reduction in 2050. The two IPCC scenarios I use are the IPCC’s middle-of-the-road emissions scenario (the “A1B” scenario) as well as the IPCC’s high-end emissions scenario (“A1FI”).

The A1B and A1FI emissions scenarios as defined by the IPCC, as well as my Waxman-Markey modified versions, are then used as input to the Model for the Assessment of Greenhouse-gas Induced Climate Change (or, MAGICC)—a simplified climate model that has been developed to emulate the large-scale results of full-fledged climate models, but which runs in a fraction of the time and for a fraction of the cost. MAGICC uses the emissions projections to produce climate projections—for both global average temperatures and global average sea level rise. For this analysis, I run MAGICC using its default settings which have been calibrated to represent reasonable estimates of various parameters including the climate sensitivity (how much the earth warms from a doubling of the atmospheric carbon dioxide concentration) and the degree of ice melt.* 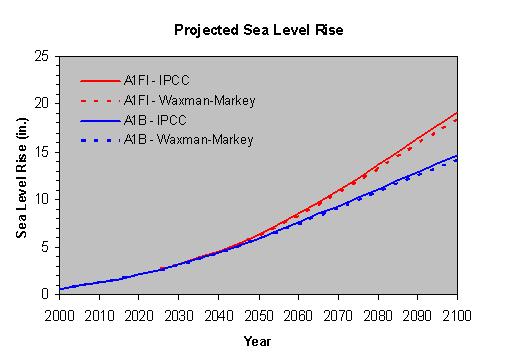 The impact on these sea level rise projections that results from the provisions in Waxman-Markey is exceedingly small.

By 2050, the year that the emissions reductions under Waxman-Markey are supposed to be fully realized, the difference between the original and the Waxman-Markey modified projected sea level rise is a mere 0.08 inches under the middle-of-the-road A1B scenario and an equally insignificant 0.16 inches under the IPCC’s high-end A1FI scenario. By century’s end the sea level rise “savings” from Waxman-Markey amounts to only 0.42 inches from A1B and 0.71 inches from A1FI. In both cases, the total “savings” is less than 4% of the projected rise—an amount that is inconsequential.

Clearly, the non-impact of U.S. greenhouse gas emissions reductions in and of themselves on the projections of the future course of global sea level rise rivals the non-impact of the same emissions reductions on the projected future course of global temperatures rise. In each case, the total effect of the Waxman-Markey provisions amounts to less than 5 years’-worth of projected change.

Thus, as I concluded previously, a full implementation and adherence to the emissions restrictions provisions described by the Waxman-Markey Climate Bill would result in setting back the projected rise in global sea levels and/or global temperatures by a few short years—a scientifically meaningless prospect.

Simply put, trying to control the course of future global climate by legislating (or regulating) carbon dioxide emissions from the United States is a losing proposition no matter how, climatologically, you look at it.

* Assumptions Used in Running MAGICC
There are many parameters that can be altered when running MAGICC, including the climate sensitivity (how much warming the model produces from a doubling of CO2 concentration), the size of the effect produced by aerosols, and the degree of ice melt. In all cases, I’ve chosen to use the MAGICC default settings, which represent the middle-of-the-road estimates for these parameter values.

Also, I’ve had to make some assumptions about the U.S. emissions pathways as prescribed by the original IPCC scenarios in order to obtain the baseline U.S. emissions (unique to each scenario) to which I could apply the Waxman-Markey emissions reduction schedule. The most common IPCC definition of its scenarios describes the future emissions, not from individual countries, but from country groupings. Therefore, I needed to back out the U.S. emissions. To do so, I identified which country group the U.S. belonged to (the OECD90 group) and then determined the current percentage of the total group emissions that are being contributed by the United States—which turned out to by ~50%. I then assumed that this percentage was constant over time. In other words, that the U.S. contributed 50% of the OECD90 emissions in 2000 as well as in every year between 2000 and 2100. Thus, I was able to develop the future emissions pathway of the U.S. from the group pathway defined by the IPCC for each scenario (in this case, the A1B and the A1FI scenarios). The Waxman-Markey reductions were then applied to the projected U.S. emissions pathways, and the new U.S. emissions were then recombined into the OECD90 pathway and into the global emissions total over time. It is the total global emissions that are entered into MAGICC in order to produce global sea level rise projections—both the original emissions, as well as the emissions modified to account for the U.S. emissions under Waxman-Markey.