Waving Goodbye to the 2°C Threshold: The Post-Copenhagen Reality

If your goal is keeping the earth’s temperature rise below 2°C, the only thing you have left is hope. Hope that the climate sensitivity—how much the global temperature rises from an increase in greenhouse gas concentrations—is far beneath what the climate models calculate it to be. When it comes to trying to use emissions cuts to achieve the 2°C goal, the cat is already out of the bag—maybe not in terms of emissions-to-date, but almost certainly so for emissions-to-come.

Such is the conclusion implicit in the recent analysis by Joeri Rogelj and colleagues published in a recent issue of Nature magazine.

Rogelj et al. did yeoman’s work in collecting all the varied (non-binding) efforts pledged by all of the various countries of the world to reduce their greenhouse gas emissions under the Copenhagen Accord that came out of last December’s big United Nations Climate Conference. From these pledges (which only extend to the year 2020 and of which Rogelj et al. commented “It is amazing how unambitious these pledges are”), Rogelj and colleagues kludged together a set of emissions pathways into the future.

Since some countries had a range of pledges emissions reductions, Rogelj et al. developed both an “optimistic” and a “pessimistic” emissions scenario to the year 2020.

What is supposed to happen after 2020 is anybody’s guess.

Is Pessimism Too Optimistic?

Up until just hours before the final version of the Copenhagen Accord was agreed upon, there was language present that pledged support to a 50% reduction in total global greenhouse gas emissions (below the emissions in 1990) by the year 2050 (developed countries were going to be responsible for 80% reductions). But that language was dropped from the final Accord.

With these emissions scenarios in hand, the researchers then turned to a climate model to foretell the general pathway that global temperatures would take for the rest of the century.

What they found wasn’t pretty for the “2°C or bust” crowd (See Figure 1 below).

For their “optimistic” scenario—which they describe as requiring “unprecedented political will to drive the necessary technological and economic innovation”—they only report “at best” a 50:50 chance of keeping the total temperature rise (since the pre-industrial times) beneath 2°C. For their “pessimistic scenario” they find a greater than 50:50 chance that the total rise will exceed 3°C. 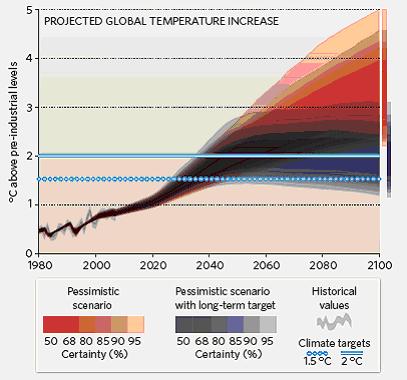 Of course (the article was published in Nature after all), the authors go on to call for even stricter emissions reductions than those thus far pledged and look ahead to more U.N. confabs to get this all ironed out:

The prospects for limiting global warming to 2°C—or even to 1.5°C as more than 100 nations demand—are in dire peril. Many countries have acknowledged and called for what is required: a global and comprehensive agreement, with a robust and legally binding structure that provides the necessary investment environment for the private sector and the basis of trust between countries to reassure all that everybody is doing their fair share. The Copenhagen Accord is not that. Given that the negotiation mandates were extended, the possibility remains that countries can commit to more than the lowest common denominator — if not by the next summit in Mexico this year, then by further meetings in 2011. It is imperative that they do so.

Right. When pledging implausible emissions reductions, you may as well make them high enough that will actually achieve the pie-in-the-sky end results!

Rogelj et al.’s ultimate goal behind their analysis, no doubt, was to set everybody straight with this type of advice—you think you know where you are heading, but the path you are on won’t take you there.

The problem of course, is that the pathway to success via this route is impassible.

Or is Optimism Too Pessimistic?

But perhaps there is yet hope.

The great philosopher Yogi Berra had these applicable words of wisdom—“You’ve got to be very careful if you don’t know where you’re going, because you might not get there.”

We still might not get to 2°C, because there is a good possibility that we don’t know where we’re going.

Rogelj et al.’s temperature projections are given to them by a climate model which simulates a range of climate sensitivities that runs from 2.1°C to 7.1°C (90% range). This explains the probability range of the projected temperatures from the two scenarios shown in Figure 1. Notice that even the “pessimistic” scenario can result in a total temperature rise quite close to 2°C if the climate sensitivity is low (the lowest end of the red range in Figure 1).

And with the way that global temperatures have been acting over the past decade or so (little to no change at all despite large greenhouse gas emissions increases), there may be indications that even Rogelj et al.’s low end climate sensitivity is too high. And if this is the case, then the chances are improved that a future emissions pathway that lies between Rogelj et al’s “pessimistic” and the even more emissions-intensive business-as-usual still brings the 2°C target into play.

So, if you belong to the group that thinks 2°C is the upper limit to what the world’s climate can withstand without massive disruption (don’t count me among that group) all hope is still not lost despite the lack of any meaningful emissions reductions agreements.

Since we don’t know where we are going, maybe we won’t actually get there!