“[T]he impact that emissions reduction efforts in the U.S. will have on global emissions totals–and by extension, global climate–is quickly diminishing.”

The just-released numbers for last year’s carbon dioxide emissions (not including land-use changes) show why forcing large cuts in carbon dioxide (CO2) emissions is not very high on the priority list of the U.S. powers-that-be (including voters).

Unilateral U.S. CO2 mitigation strategies, in other words, are doomed to increasing irrelevance–and even unintended consequences should carbon rationing at home result in industrial transfers to less regulated areas.

Fig. 1 shows how the picture has evolved since the late 1950s. An increasing amount of the global carbon dioxide emissions are being produced from outside of the U.S. Since about the turn of the 21st century, this divergence has picked up pace as global emissions have steeply increased while U.S emissions have been rather flat.

Fig. 1 is pretty good at illustrating why, despite the clamor raised by some prominent clamorers, the U.S. people and government aren’t particularly motivated at trying overly hard to reduce carbon dioxide emissions to any large degree. When it comes to pressing issues, getting a lot of bang for the buck is what plays the best. And what the chart above shows is that no amount of twiddling with the type of fuel used to run our country (and the expense that will result from it) is going to produce any meaningful impact on the growth of global CO2 emissions.

When “global warming” first came en vogue, back in the late 1980s, the U.S. was annually contributing about 22% of the global CO2 emissions, by 2010, our contribution has dipped to 16% and continues to decline (Fig. 2). This means that the impact that emissions reduction efforts in the U.S. will have on global emissions totals (and by extension, global climate) is quickly diminishing. 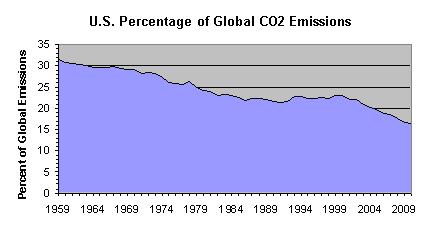 In fact, the only meaningful contribution from any large U.S. CO2 emissions reductions will come from exporting our solutions/technologies to those countries which are becoming the primary drivers of the upward CO2 emissions trends. I say this because, as can be seen in Fig. 1, global emissions have increased by an amount greater than the total annual U.S. emissions in just that last 6.5 years. So at best, completely eliminating all U.S. CO2 emissions now and forever would only set back global emissions by a bit more than half a decade.

In the bang vs. buck tally, this is little of the former for a lot of the latter.

The U.S. recession has certainly played a role in the dip in U.S. CO2 emissions during the past several years (Fig. 3), but the recent decline in the U.S. percentage of global emissions (Fig. 1)—after being steady through the 1980s and 1990s—started about a decade ago. This was several years prior to the U.S. economic slowdown, evidence that the declining contribution from the U.S. is not just a temporary condition that will reverse with a domestic economic recovery, but one that is being driven by the energy appetite of the rest of the world—primarily from the developing countries like China and India.

Expect this appetite to continue to expand. Again, when it comes to bangs and bucks for energy, fossil fuels produces the most for the least—but has the consequence of driving up global emissions totals. So, it seems highly improbable that the U.S. will ever again be a dominant driver in global CO2 emissions trends. 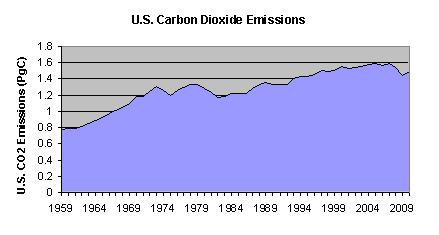 Ten to twenty years from now, long past the latest estimates of the point of no return for avoiding climate catastrophe (for those who buy into such pronouncments), an updated Fig. 1 will look little different than the current Fig. 1. This is not to say that interested parties should not pursue new technologies in energy production, or that someday the primary energy production for the world will take the form of something other than net CO2-releasing methods, but that “someday” is not upon us anytime soon.

In fact, a large gap in time stands between us and the wide dispersal of such technologies. Fig. 1 will retain its character into the foreseeable future, with or without, any actions in the U.S. aimed at reducing domestic emissions. Consequently, the drive to reduce emissions, especially forcefully, will most likely wait until we’ve dealt with a great many more immediate concerns. It is only in times of relative luxury that we can pursue actions whose results are far greater in the future (several generations hence) than they are in the present. Unfortunately, those times are not upon us now.