Specifically, Knappenberger very conservatively ignored the problem of “leakage”–he didn’t model the fact that unilateral U.S. carbon caps would actually increase the rate at which other countries’ own emissions grow. What’s worse, even if the entire world signed on to the aggressive emission schedule in W-M, the resulting environmental benefits would be achieved at a staggering cost in terms of lost economic output.

No matter how you slice it–whether the U.S. goes it alone, or the rest of the world signs on too–the environmental benefits of W-M are swamped by its economic costs.

“Leakage”–An Important Variable. In a MasterResource post that has become a touchstone of the great climate debate, Chip Knappenberger used a standard model to assess the expected reductions in global mean temperatures if the U.S. faithfully adhered to the emission targets in W-M. Knappenberger found that by 2100, the projected global warming under two different “baseline” emission scenarios would be postponed by a handful of years. 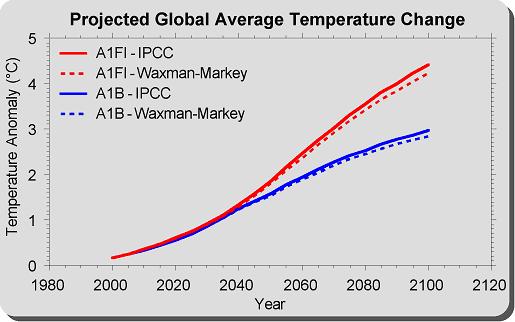 The pro-interventionist scientists at RealClimate have conceded the basic validity of Chip’s analysis; they simply accuse him of rigging the game by considering unilateral U.S. action.

What is interesting is that Chip did not assume that the emissions of the rest of the world would grow more quickly because of (the stipulated) unilateral U.S. committment to W-M. Yet this would surely happen, because of a phenomenon referred to in the climate economics literature as leakage. The intuition is quite simple: If the U.S. imposes a steep price on operations that emit carbon, then U.S. industries will produce fewer carbon-intensive goods and services. (That’s the whole point, after all.)

Yet because of the reduction in output of these sectors, the world price of these items will tend to rise, which in turn will call forth greater output from (carbon-intensive) sectors in the unregulated countries.

I caution readers that some cynics of government action to limit climate change draw an unwarranted conclusion from this type of analysis. I have heard such critics say things like, “This is ridiculous! If the U.S. goes it alone, all we’ll do is ship all of our jobs to China, and we won’t affect global emissions one iota.”

Strictly speaking, that is taking it too far. For various reasons, it is not true that every cutback in carbon-intensive production in the U.S. would be perfectly offset by expanded production in an unregulated jurisdiction. However, even though there won’t be a one-for-one offset in terms of final goods produced, the relative carbon emissions is a different matter. This is because Chinese manufacturing operations emit more tons of carbon than American factories do, in order to produce the same physical amount of goods.

Hence, the amount of “leakage” resulting from a unilateral U.S. emissions cap is ultimately an empirical matter, but it would probably be very significant. To repeat, Chip’s analysis (described above) did not take this effect into account. Chip merely took two standard IPCC baseline emission scenarios, and then altered them by reducing the baseline growth in U.S. emissions in order to comply with the targets in W-M. He is consequently overestimating the environmental benefits of unilateral American adherence to the emission targets in W-M. In other words, the dotted lines in the chart above would be even closer to the solid lines, once the model took into account the superior profitability of Chinese carbon-intensive operations after the U.S. government hobbled American operations.

Leakage in the Context of the “Social Cost of Carbon.” Some of the more sophisticated critics of Chip’s analysis asked a reasonable question: Since plenty of economic models show a “social cost of carbon” emissions, it doesn’t really matter what the rest of the world does, right? After all, if emitting an extra ton of carbon today, translates into a (present discounted value of) an expected increase in future climate change damages of (say) $35, then it surely moves us in the direction of efficiency if the U.S. government slaps a penalty on domestic emitters, right?

There are two problems here. First, nobody is defending Waxman-Markey on the basis of cost/benefit analysis, because it can’t be done. There is a bit of a problem in comparing apples with apples (since the integrated assessment models gauging the impact of mitigation policies all assume concerted worldwide action), but it is safe to say that the emissions targets in W-M are far too aggressive, if we are going to be guided by the “social cost of carbon.”

For example, Table 3.10 (page 229) of Working Group III’s contribution to the IPCC Fourth Assessment Report (.pdf) shows that of 177 scenarios surveyed from the peer-reviewed literature, only 6 scenarios assumed worldwide emissions reductions in the steepest category of 50% – 85% by the year 2050. (Recall that W-M imposes a reduction of 83% by 2050. But note that the IPCC reductions are relative to 2000 emissions, while W-M’s 83% target is relative to 2005 emissions.)

If we turn to the specific DICE model by William Nordhaus–who is a pioneer and leader in this field, and who is a definite proponent of a carbon tax–we see that the aggressive emission cutbacks in W-M fail his cost/benefit test by a wide mark. The IPCC’s Table 3.10 and Nordhaus’s own results agree that capping emissions in 2050 at 83% below current levels, would correspond to Nordhaus’s estimates of a policy of capping atmospheric concentrations at no more than 1.5x preindustrial levels. (See Nordhaus’s Table 5-5, p. 96 here [.pdf]. Note that we are being conservative with our choice, because the steep emission cuts in W-M are arguably closer to the “Gore proposal,” which the DICE model finds even more destructive than the policy that we have instead chosen as a surrogate for W-M.)

Yet according to Nordhaus’s DICE model, such an aggressive policy would do far more harm to the economy, than it would yield in benefits of averted climate damage. Specifically, Nordhaus estimates that the policy corresponding to W-M targets would make the world some $15 trillion poorer relative to the business-as-usual baseline of no controls (see Table 5-1, page 82, here [.pdf]). Yes, worldwide commitment to the aggressive emission schedule in W-M would avert climate damages that would otherwise occur, which DICE values as a benefit of $12.6 trillion. But the draconian emission caps would require $27.24 trillion in abatement (compliance) costs. Thus the environmental benefits are swamped by the economic costs.

So we see that using the standard “social costs of carbon” approach, reveals that W-M imposes far too high a price on carbon emissions than is warranted by this Pigovian framework. That is why proponents of steep emission cuts must abandon standard cost/benefit analysis, and instead recommend particular environmental targets (such as stabilizing atmospheric concentrations at a presumed “safe” level) and then try to find the least-cost method of attaining them.

As a final point, we should note how the problem of leakage also influences the “social cost of carbon” as computed in various models. When Nordhaus or other economists calculate the social cost of carbon (SCC), they are asking what happens to the present discounted value of future environmental damages, if someone emits an additional ton of carbon today, while holding the assumed trajectory of all future emissions constant.

Now we see the weakness in this metric, when trying to assess the net benefits of unilateral climate policy. Once we take leakage into account, we see that the standard measure of SCC overstates (possibly grossly so) the true costs to society from an additional unit of emissions. In reality, there are two things going on: When a U.S. manufacturer produces more units of a carbon-intensive good, it is true that he emits more carbon dioxide into the atmosphere. This is what the SCC looks at, and judges him accordingly.

However, the U.S. manufacturer also pushes down the world price of the good in question, and that tends to cause other producers to emit less CO2. Thus, there is a positive externality laid on top of the negative externality. The greater the scope for leakage, the greater the positive externality. In the extreme, where U.S. operations would be completely outsourced to China (in terms of carbon emissions, if not output of final goods), then the correctly measured “social cost of carbon” for U.S. operations would be zero, in the context of a unilateral U.S. cap.

Conclusion. Here are the takeaway messages:

(A) If the U.S. implements Waxman-Markey unilaterally, the environmental benefits will be even less than indicated by Chip Knappenberger’s pessimistic analysis.

(B) If the whole world implements Waxman-Markey, then the loss to economic output will far exceed the reduction in expected environmental damages.

No matter how you slice it, Waxman-Markey fails standard cost/benefit tests. W-M advocates are certainly free to criticize standard cost/benefit tests, but they can’t stop there. They still need to justify quantitatively the steep emission targets in W-M. And to the extent that they invoke U.S. leadership in prodding the rest of the world to follow suit, proponents also need to come up with a plausible story showing the likelihood of worldwide action, with and without Waxman-Markey, versus some other possible U.S. approach.

Yet W-M proponents have done none of these things. Surely they could at least try–even in an informal blog post–to formalize their case, before expecting the American people to sign on to a plan that could cost trillions of dollars in forfeited economic growth, and which on its face will do very little to alter the course of global warming.

UPDATE 5/27: The analysis above takes the Waxman-Markey emissions reduction target of 83% (by 2050) at face value. In fact–as this CRA analysis [.pdf] explains on the bottom of pages 2 and 8–the current version of Waxman-Markey allows U.S. emitters to purchase international offsets to satisfy (some) of their compliance requirements. Having this option naturally reduces the abatement costs for any one country to meet the W-M targets. However, it is difficult to know what impact this subtlety has on the various IPCC models’ estimates of the cost of reducing worldwide emissions by 83% by 2050, because it is unclear how the availability of international offsets would scale upwards in the scenario where “the whole world implements Waxman-Markey.” To the extent that one country uses international offsets to pay another to achieve actual reductions in emissions, then these cost savings would presumably already be contained in at least most of the models studied by the IPCC, which typically assume least-cost implementation schemes. But to the extent that Waxman-Markey allows domestic emitters to, say, pay to avoid foreign deforestation, the “83% emissions cut by 2050” might be overestimating the abatement cost as reported by some of the IPCC models, if they are assuming reductions in actual emissions to reach stated targets.