Yesterday’s MasterResource post looked at the potential climate impacts of the proposed Waxman-Markey Climate Bill. But I limited my analysis to only U.S. actions—after all, Waxman-Markey can’t mandate international man-made greenhouse gas reduction timetables. But, what would happen if the rest of the world wanted to join in?

The ability of the industrialized world, through emissions reductions alone, to impact the future course of global climate is minimal. If the U.S., Canada, Australia, Japan, Europe, and former Soviet countries all limited their emissions of greenhouse gases according to the schedule laid out under Waxman-Markey—a monumental, unexpected development—it would, at most, avoid only a bit more than one-half of a °C of projected global warming (out of 4.5°C—or only about 10%). And this is under worst-case emissions assumptions; middle-of-the-road scenarios and less sensitive climate models produce even less overall impact.

To make any significant in-roads to lowering the rate (and thus final magnitude) of projected global temperature rise, the bulk of the emissions reduction needs to come from other parts of the world, primarily Asia, Africa, South America, and the Middle East. The problem is, is that these governments are not inclined to restrict the energy usage of its citizens—in fact, they either are in the process of, or are soon hoping to, significantly expand the amount of energy available to their (growing) populations—and in the process, subsuming all potential emissions savings from the (current) industrialized world.

If supporters of large greenhouse gas emissions restrictions were really interested in “saving the world,” they would be putting all of their effort into getting China and India to buy into their plan—and then turning to the U.S. up in mop up duty. As it stands now, they are talking to the wrong end of the horse.

Over the first decade of the 21st century, global carbon dioxide emissions have been growing a pretty good clip—in fact, they’ve been growing at a rate which exceeds the projected rate from the most extreme scenario envisioned by the Intergovernmental Panel on Climate Change (IPCC).

It is also the scenario which, when fed into the world’s climate models, produces the greatest warming by the end of the century—about 4.5ºC (although the world abounds with observations that suggests that this temperature rise is overblown, but that is the subject of a different analysis).

The question I want to explore here, is, “if we wanted to do something to ameliorate this projected temperature rise, what could we do?” And more specifically, who are “we”?

The proposed Waxman-Markey Climate Bill is aimed to reduce the projected rise in global temperature. This bill calls for a reduction in greenhouse gases from the United States according to the following schedule—a 20% reduction (below the 2005 emissions level) by the year 2020, a 58% reduction by 2030 and a 83% reduction by 2050.

So, let’s take “we” to be Americans bound by the emissions reduction schedule laid out under Waxman-Markey and see what effect that “we” would have on the projected global temperature increase if “we” followed the Waxman-Markey plan. Then, we’ll look at what would happen if “we” were able to get other parts of the world to go along with the plan.

The extreme IPCC scenario is the A1FI scenario and is described as a fossil-fuels intensive scenario of a “future world of very rapid economic growth, global population that peaks in mid-century and declines thereafter, and the rapid introduction of new and more efficient technologies” and that the “[m]ajor underlying themes are convergence among regions, capacity building and increased cultural and social interactions, with a substantial reduction in regional differences in per capita income.”

What this all means in terms of the IPCC’s vision of future CO2 emissions is shown in Figure 1. 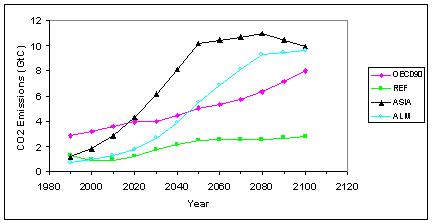 Figure 1. Projected carbon dioxide emissions from four country groupings as defined by the IPCC’s A1FI scenario. For a description of the country groupings, see the text. (source: IPCC SRES)

As can be seen in Figure 1, the emissions from each of the groups increase, with most of the increase in the first half of the century coming from the ASIA. In the last few decades of the second half of the 21st century, the IPCC projects the emissions from the OECD90 countries to quickly ramp upwards, despite slowed growth or even declines among other groups and despite little population growth. This seems like an odd expectation, but I digress…

Now, what I am going to do, through the help of MAGICC (a simple climate model which was developed to emulate the large-scale output of more complex climate models and which was designed to explore the impacts of different emissions scenarios on projected global temperatures), is show you what happens to future global temperature projections if the Waxman-Markey emissions limitation provisions were adopted (and adhered to) by the U.S. And while I’m at it, I’ll take you through the impacts of the adoption by the other regions as well.

Figure 2 is the same as Figure 1, except that I have adjusted the future OECD90 emissions to account for a reduced contribution from the U.S. assuming we stick to the Waxman-Markey emissions schedule. 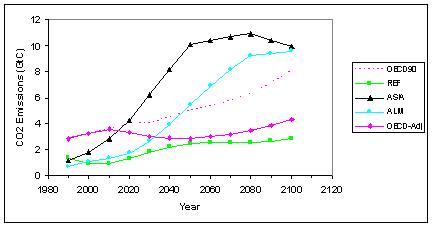 Figure 2. Same as Figure 1, except the original OECD90 pathway (dotted pink line) has been modified to account for the U.S. adherence to the Waxman-Markey emissions schedule (solid pink line).

Figure 3 shows what happens to global temperature projections when the MAGICC model is run with the original A1FI emissions pathways (shown in Figure 1) as well as when it is run under the modified A1FI scenario to include U.S. reductions (shown in Figure 2). The net result on the projected future global temperatures of a full adherence to the stipulations of the Waxman-Markey Climate Bill is a temperature “savings” of 0.06ºC by the year 2050, increasing to about 0.20ºC by the end of the century. 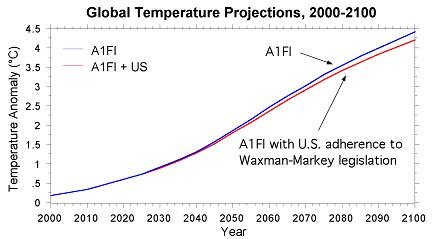 So, there you have it—going it alone, the U.S. succeeds at only managing to knock off two-tenths of a global temperature rise projected to be nearly 4.5ºC by 2100. Not a whole lot of bang for the buck.

So, clearly we (Americans) need a little, er, a lot of help.

In Figure 4, I depict what happens to the A1FI emissions pathways if every country of the world decided that the plan drawn up by Representatives Waxman and Markey was something that it could not live without and joined in the effort. Most notably, instead of the rapid rises in ASIA emissions that are projected to occur through the half of the 21st century, the emissions there top out by 2010 and decline sharply thereafter—despite a growing population and rapid industrialization—that’ll be a neat trick to pull off! 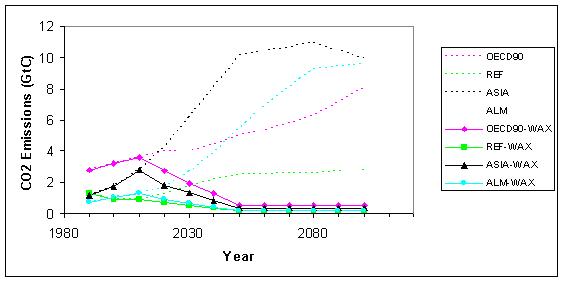 Figure 4. Same as Figure 1, except that all groups adhere to the Waxman-Markey emissions reduction schedule. Dotted lines are the original A1FI pathways, solid lines are the modified pathways. 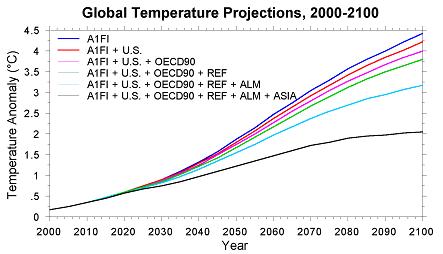 Figure 5. Projected global temperatures under the A1FI scenario (blue) and the A1FI scenario modified for an adherence to the Waxman-Markey emissions reductions schedule by all countries in the world in succession.

The top curve in Figure 5 (the greatest temperature rise) is projected to occur under the unfettered A1FI scenario. The bottom curve (the least temperature rise) occurs with everyone on-board. The curves in the middle show who contributes what. The U.S. acting alone under Waxman-Markey (as we have seen) reduces the projected global temperature rise by the year 2100 by 0.195ºC, if the rest of the OECD90 countries come along, the reduction increases to 0.402ºC—still less than 10% of the total projected rise. Even with the help of the REF countries, we only get a reduction of 0.602ºC. When the temperature rise really starts to show a decent slowdown is with the cooperation of the ALM countries (a reduction 1.241ºC). And, of course, the biggest impact, nearly as large as everyone else combined, comes from the ASIA countries. If they alone reduce emissions in line with Waxman-Markey suggestions, they will produce a 1.129ºC decline, and when acting along with everyone else they bring the total temperature reduction to 2.37ºC—a rise that is more than 50% smaller than projected under the original A1FI scenario. Nothing to sneeze at.

(Again, let me stress that I am describing the impacts on projected global temperatures. There is growing evidence that actual global temperatures are not evolving the way projections indicate that they should. So, the degree to which these temperature projections described above reflect what really will happen in the future, is far from certain.)

So, the key to producing a meaningful change in the course of projected global temperatures is to make sure that those countries of the world which are projected to have the greatest contributions to future emissions growth—primarily the countries in the ALM and ASIA group—take the actions to insure that those growth projections are not met.

The United States has an extremely limited direct role to play in projected future global climate—internal emissions reductions do virtually nothing. So, plans like the Waxman-Markey Climate Bill really don’t serve to change the climate in and of themselves. Instead, their purpose is to attempt to spur technological innovation and set an example as to what can be done to reduce emissions—with Americans serving both as the experimenters and the guinea pigs. It is not the climate impact of our experiment that is of any significance, but instead it is the tools that we may develop in attempting to achieve major emissions reductions. for the only truly effective course of action we have available to us in attempting to control the future course of global climate is to tell the rest of the world what to do and how to do it.

Let’s hope they are agreeable—for “we” (Americans) are setting ourselves up to take a great risk for which the outcome, both internally and externally, is far from certain.