“Yes, you read that correctly. Paul Krugman, a Nobel Laureate, writing in America’s paper of record, just accused nearly half of the House of Representatives, including both Republicans and Democrats, as guilty of treason against the very planet—along, presumably with the many thousands of scientists, policy analysts, economists, and environmentalists who have raised objections to the Waxman-Markey energy bill.”

New York Times op-ed columnist Paul Krugman recently praised the passage of the Waxman-Markey climate change bill by the House of Representatives as a “remarkable achievement.” But rather than just congratulte House members voting aye, Krugman disparaged the nays as having undertaken “treason against the planet” for choosing “willfully, to ignore that threat [from climate change], placing future generations of Americans in grave danger, simply because it’s in their political interest to pretend that there’s nothing to worry about.”

Krugman emotions got the best of him, for his logic fails, his facts are wrong, and his conclusions are off-the-wall.

His logic breaks down right from the start when he implies that a ‘no’ vote was a sign of a climate change “denier”—a description he hangs on people who think that human emissions from carbon dioxide (primarily a result of fossil fuel burning) have not and will not change the natural course of the earth’s climate.

While possibly his “denier” label fits some of the 212 ‘no’ vote-casters, unless he has asked each and every one of them and therefore knows something that I don’t, it is likely that it doesn’t include very many of them. Of the 212 Representatives who voted against Waxman-Markey, 165 of them voted for a proposal put forth by Rep. J. Randy Forbes (R-VA), which sought to replace Waxman-Markey cap-and-trade bill with a Manhattan Project for Energy Independence to intensively research and develop new technologies to improve energy efficiency, step up conservation, develop renewables (solar, biofuels), sequester carbon from coal-powered plants, and push for nuclear energy. This alternative would seem to qualify as “doing something” about greenhouse gases in Krugman terms. Hardly the votes of “deniers.”

In fact, there are myriad good reasons to have voted against the Waxman-Markey bill—opposition to raising the price of energy in hard economic times, not wanting to risk the potential for further job losses and/or the fact that even in its fullest extent, the bill will have no scientifically meaningful impact on the future course of global climate. In fact, had you listened to the opposition arguments made on the House floor last Friday, you would have heard reference to these issues far and away more often than you would have heard “denier” arguments (counter to Krugman’s contention).

In fact, there is another good reason to have voted against the bill: the growing amount of scientific evidence that the future course of global climate and it impacts is being improperly projected.

Krugman cites recent conclusions from M.I.T. researchers “who were previously predicting a temperature rise of a little more than 4 degrees by the end of this century, are now predicting a rise of more than 9 degrees.” Krugman continues:

Why? Global greenhouse gas emissions are rising faster than expected; some mitigating factors, like absorption of carbon dioxide by the oceans, are turning out to be weaker than hoped; and there’s growing evidence that climate change is self-reinforcing — that, for example, rising temperatures will cause some arctic tundra to defrost, releasing even more carbon dioxide into the atmosphere.

Not surprisingly, Krugman left out the fact that while global emissions of greenhouse gases are rising faster than expected, global temperatures are rising much slower than expected. This clearly points to a problem somewhere—quite possibly within the very type of climate models that the M.I.T. researchers used to base their conclusions, as I have discussed).

If the models fail to properly relate observed emissions to observed temperature changes, then the reliability of their future projections needs to be questioned. Krugman instead chooses to embrace them.

That seems like a respectable basis for which to vote against Waxman-Markey—the lack of confidence in alarmist climate projections.

Here’s another: Krugman completely misinterprets the science on Americans’ response to heat waves. He said:

Temperature increases on the scale predicted by the M.I.T. researchers and others would create huge disruptions in our lives and our economy. As a recent authoritative U.S. government report points out, by the end of this century New Hampshire may well have the climate of North Carolina today, Illinois may have the climate of East Texas, and across the country extreme, deadly heat waves — the kind that traditionally occur only once in a generation — may become annual or biannual events.

In other words, we’re facing a clear and present danger to our way of life, perhaps even to civilization itself. How can anyone justify failing to act?

Well, how about this justification—the hottest places in the U.S. are the ones which experience the fewest number of deaths during heat waves. We have shown this on repeated occasions (in the scientific literature, see references below) in research that I have been involved with examining the relationship between excessive heat and human mortality. Not only did we show that the nations hottest (both in terms of temperature and humidity) cities, for example, Phoenix, Dallas, Houston, Tampa, Miami, have the lowest incidences of heat-related mortality in the country, but that in major cities all across the country, the population has grown less sensitive to heat waves even as urban temperatures have increased over the past four decades or so (Figure 1). 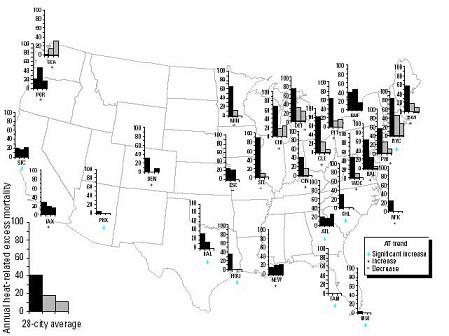 Figure 1. Annual average excess summer mortality due to high temperatures, broken down by decade, for 28 major cities across the United States. For each city each of the three bars represents the average mortality during successive decades (left bar 1964-66 + 1973-1979; middle bar 1980-1989, right bar 1990-1998). Bars of different color indicate a statistically significant difference. No bar at all means that no temperature/mortality relationship could be found during that decade/city combination (taken from Davis et al., 2003b).

Clearly, what is happening is that as high temperatures become more commonplace, we better incorporate them into our daily lives—through better access to air-conditioning, community awareness programs, heat watch/warning programs, improved medical technologies, and just plain common sense. And, as has been shown in examples from Chicago (Palecki et al., 2001) and France (Fouillet et al., 2008), these adaptations can take place quickly. It is the rare and unexpected heat wave that kills people, not the common ones. So Krugman’s meant-to-scare example about “deadly heat waves” runs counter to the best science on the subject.

At least Krugman recognizes that there are some very sound scientific reasons why someone may be against the Waxman-Markey bill or other efforts like it (although he ultimately dismisses the notion that many of the 212 ‘no’ voters based their vote on any of them):

Well, sometimes even the most authoritative analyses get things wrong. And if dissenting opinion-makers and politicians based their dissent on hard work and hard thinking — if they had carefully studied the issue, consulted with experts and concluded that the overwhelming scientific consensus was misguided — they could at least claim to be acting responsibly.

Paul Krugman ought to take his own words to heart. His lack of careful study and consideration of known behaviors belies the semblance of the forthrightness of his accusations.