Is GOP Opposition to Cap-and-Trade Self-Contradictory?

Barring the trickery of a lame duck conference committee, cap-and-trade is dead in the 111th Congress. Some blame President Obama for not taking a more hands-on role. Others blame environmental groups for waging a $100 million lobbying campaign without winning a single GOP convert to the Kerry-Lieberman bill. Others blame the allegedly “well-funded denial machine,” even though proponents, who include major corporations like BP as well as Big Green, must have outspent free-market and conservative advocacy groups by more than 100 to 1.

The August 11 edition of Climatewire (subscription required) featured interviews with Exelon Corp. VP Betsy Moler and Resources for the Future President Phil Sharp, who lament that Republican lawmakers, the “inventors” of “market-based” environmental policy, turned against their own “invention.” Moler and Sharp are trying to spin GOP opposition to cap-and-trade as self-contradictory, hence as unstable, hence as reversible. As Climatewire reports, Moler is not ready to “throw in the towel” and Sharp entertains the hope that a “new kind of coalition” will emerge in the next Congress.

Now, let’s look at this notion, peddled by Moler and Sharp, that Republicans flip-flopped and trashed their own legacy by nixing cap-and-trade.

In an interview, Moler said that her deep disappointment was the rejection by Republican leaders in Congress of a market-based strategy for raising the price of carbon emissions, to speed transitions by power plants, industry and consumers to cleaner energy.

“The thing that just amazes me, confounds me, surprises me is how successfully the Republican leadership and a lot of the people who would be potentially negatively impacted have been in vilifying what have historically been market-based solutions,” Moler said.

“Cap and trade is really a Republican instrument that grew out of a lot of the Republican thought leaders as a market-sensitive, market-friendly, anti-command-and-control mechanism” to reduce sulfur- and nitrogen-based air pollution in the 1990 Clean Air Act amendments. “Now, some of the same people who invented it have turned on it as an energy tax,” she said. “It’s a huge missed opportunity. I don’t know where you go next.”

Moler’s regret is seconded by Philip Sharp, president of Resources for the Future, who, as a Democratic House member from Indiana, stood with Moler in the 1990s in the energy deregulation campaign. Sharp was a pivotal factor in Congress’ adoption of the 1990 Clean Air Act amendments and the 1992 Energy Policy Act, which opened the way for FERC’s electricity market orders four years later.

“I’m not here to say cap and trade is the only way to do this,” Sharp said in an interview. “It worked magnificently with SO2 and a couple of other instances.” Scaling it up massively to deal with economywide carbon emissions is another question. “We don’t know we can manage it as effectively,” he said.

“But what is really unfortunate in the public debate is that the current Republican leadership has overthrown one of the great Republican successes in this country [under President George H.W. Bush], to capitalize on the flexibility of the marketplace” in achieving regulatory change, Sharp said.

“I don’t think people appreciate the extraordinary challenge that represented and the difficulty of getting it done” in the 1990s, he said. Now, with the demise of that approach, Congress has invited U.S. EPA to step in on the climate front “and regulate the living [daylights] out of everything and see how well a modern economy works doing that.”

The cap-and-trade programs enacted under President George H.W. Bush are not “magnificent” successes, if predictable compliance costs, which businesses need for long-term planning, are a criterion of success. As Yale University economist William Nordhaus points out in Life After Kyoto: Alternative Approaches to Global Warming Policies (Dec. 2005), sulfur dioxide (SO2) allowance prices have been highly volatile: “SO2 trading prices have varied from a low of $70 per ton in 1996 to $1500 per ton in late 2005. SO2 allowances have a monthly volatility of 10 percent and an annual volatility of 43 percent over the last decade.” For perspective, Nordhaus notes that, during 1994-2005, SO2 permit prices were more volatile than either crude oil prices or stock-market prices. 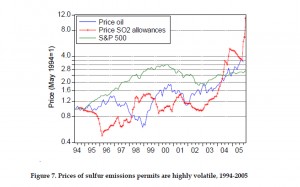 In Economic Issues in Designing a Global Agreement on Global Warming (Mar. 2009), drawing on more recent experience, Nordhaus reiterates that “quantitative limits [i.e. cap-and-trade schemes] have proven to produce severe volatility in the market price of carbon under an emissions-targeting approach. The volatility arises because of the inelasticity of both supply and demand for permits.” He continues:

I have reviewed the history of the market prices of tradable permits for both the SO2 trading system in the U.S. and for the CO2 system in the EU. These prices have shown an extremely high level of volatility. I found that the prices of U.S. SO2 emission allowances have been approximately as volatile as oil prices . . . .The volatility of CO2 allowances in the EU ETS is similarly large: in the period from October 2008 to February 2009 alone, ETS carbon prices have varied between €9 and €24 per ton of CO2 . . . . 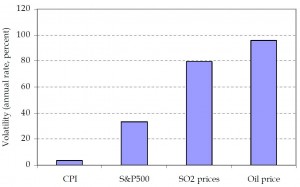 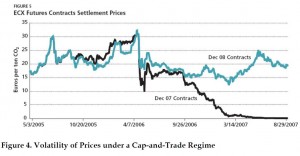 Note also that, according to Nordhaus, “the volatility of allowances is not due to policy errors. It is inherent in this kind of instrument. The high level of volatility is economically costly and provides inconsistent signals to private-sector decision makers.” 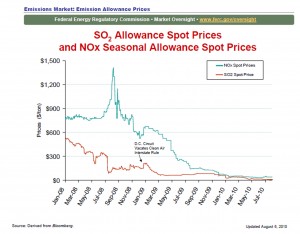 In short, if predictable costs are a criterion of success, then it is hype to describe the SO2 and NOx trading programs as “magnificent.”

However successful the SO2 trading program may have been, it is a dubious model for climate policy, because SO2 and CO2 are different. Utilities participating in the SO2 emissions trading program could meet all or part of their obligations by purchasing low-sulfur coal and/or installing scrubbers, a commercially-proven emission control technology. In contrast, as Kenneth Green, Steven Hayward, and Kevin Hassett of the American Enterprise Institute point out, there is no low-carbon coal, and no commercial technology to “scrub” carbon dioxide (CO2) emissions out of power plant exhaust streams. Thus, unlike an SO2 trading program, a carbon cap-and-trade program has a high potential to become a job-killing energy-rationing scheme.

The greater economic risk of carbon cap-and-trade schemes derives from another key difference as well. Unlike sulfur, which is an impurity in coal and oil, carbon is intrinsic to the chemistry of fossil fuels. Consequently, whereas capping SO2 does not logically entail an unlimited agenda aiming at the abolition of fossil fuels, capping CO2 does imply total suppression as an ultimate objective. The abolitionist impulse is audible in the apocalyptic rhetoric of the global warming movement, in petitions demanding that EPA establish national ambient air quality standards (NAAQS) for CO2 at 350 parts per million (not even a global depression lasting several decades would be sufficient to attain such standards), and in Al Gore’s campaign to “repower America” with “zero-carbon energy” within “ten years.” Triggers for pull-out-the-stops, sky-is-the-limit regulation also lurk in the Waxman-Markey and Kerry-Lieberman bills’ escalator clauses, which all but ensure that the explicit emission reduction target (83% below 2005 levels by 2050) would be superseded by more aggressive requirements.

Climate Change Is Not Air Pollution

The health effects of SO2 and other air quality contaminants depend on short-term — annual, monthly, or even daily — emission levels. Thus, in theory, setting quantitative targets and timetables (caps) can produce significant, measurable public health benefits, making it reasonable to accept price volatility as an unavoidable risk. The same does not hold for climate “forcing” agents such CO2. The health effects of greenhouse gas emissions (if any) depend on the total stock of greenhouse gases in the atmosphere, not annual emissions.  Thus, observes Willaim Pizer of Resources for the Future, “It cannot matter whether a ton of CO2 is emitted this year, next year or ten years in the future if all we care about is the total amount in the atmosphere.”

Indeed, not only is there no plausible public health rationale for capping annual greenhouse gas emissions, the costs would likely far exceed any public health benefits. As Chip Knappenberger shows, based on IPCC climate sensitivity assumptions, reducing U.S. greenhouse gas emissions 83% below 2005 levels — the Waxman-Markey bill target — would have a negligible impact on global climate change, averting a mere 0.05°C of global warming by 2050. Even if one considers global warming to be a serious problem, the benefits of capping emissions are too paltry to justify the risks, which in addition to volatile compliance costs include rampant opportunities for corruption, creative accounting, and rent-seeking.

Unsurprisingly, Pizer, Nordhaus, Green, Hayward, and Hasset all argue that carbon taxes (price-based constraints) are more efficient than cap-and-trade (quantity-based constraints) as a method for limiting the total stock of emissions over time. Carbon taxes are administratively simpler, the costs are more transparent to the public, there is less opportunity for corruption and rent-seeking, and, most importantly, the costs are fixed and therefore entirely predictable. Of course, nobody would accuse Republicans of being inconsistent for opposing energy taxes. A greenhouse cap-and-trade program, however, is just a sneaky, implicit, less efficient form of taxing carbon-based energy.

Means Are Not Ends

Fourth, just because “market-based” approaches are more efficient, in principle, than command-and-control regulation does obligate Republicans to support Waxman-Markey or Kerry-Lieberman. Moler and Sharp confuse ends and means. Only if Republicans want government to raise energy prices, make coal uneconomical as an electricity fuel, or, more broadly, restrict Americans’ access to carbon-based energy would they be inconsistent to oppose a “market-based” strategy to accomplish those objectives. But those are the environmental movement’s goals, not the GOP’s.

Moler and Sharp overlook the obvious — most Republicans oppose both market-based and command-and-control climate change mitigation strategies. For example, all 41 Senate Republicans voted for the Murkowski resolution to block EPA regulation of greenhouse gases via the Clean Air Act. Of the 154 co-sponsors of Rep. Marsha Blackburn’s legislation (H.R. 391) to preclude greenhouse gas regulation via the Clean Air Act, only one (Dan Boren of Oklahoma) is a Democrat. More tellingly, of the 125 House Members who have signed the discharge petition to allow a floor vote on the Blackburn bill, not one is a Democrat.

So it’s silly to say that Republicans “invited U.S. EPA to step in on the climate front ‘and regulate the living [daylights] out of everything. . .'” President Obama threatened to veto both the Murkowski resolution and the much weaker Rockefeller bill, which would merely postpone EPA regulation of stationary sources of greenhouse gases for two years. It’s the Democratic leadership, not the GOP, that has “invited” EPA to make climate policy through the regulatory back door.

The Dumb Party Ain’t that Dumb

Finally, Republicans betray themselves (ask former President George “Read My Lips; No New Taxes” Bush) when they advocate raising taxes. Because carbon is intrinsic to the chemistry of fossil fuels, a carbon cap-and-trade scheme is a virtual broad-based energy tax. The same cannot be said of the SO2 program, which was merely a virtual pollution tax.

Moler and Sharp would like GOP lawmakers to believe they can win elections by becoming the Party of Energy Taxes. Fortunately, most Republicans don’t need much coaching to realize that is complete bunk.