Electricity for the Poor – What Copenhagen Really Needs to Confront

When you fly overnight from Johannesburg to Europe the lights become thin just north of Lusaka, Zambia, a few more in Zambia’s Copper Belt and then nothing (and I mean nothing) until the North African coastline. For most of this 11-12 hour flight there are no artificial lights below. From the Sahara on south, but excluding South Africa, a region that is home to more than 400 million people consumes less electricity than New York City. 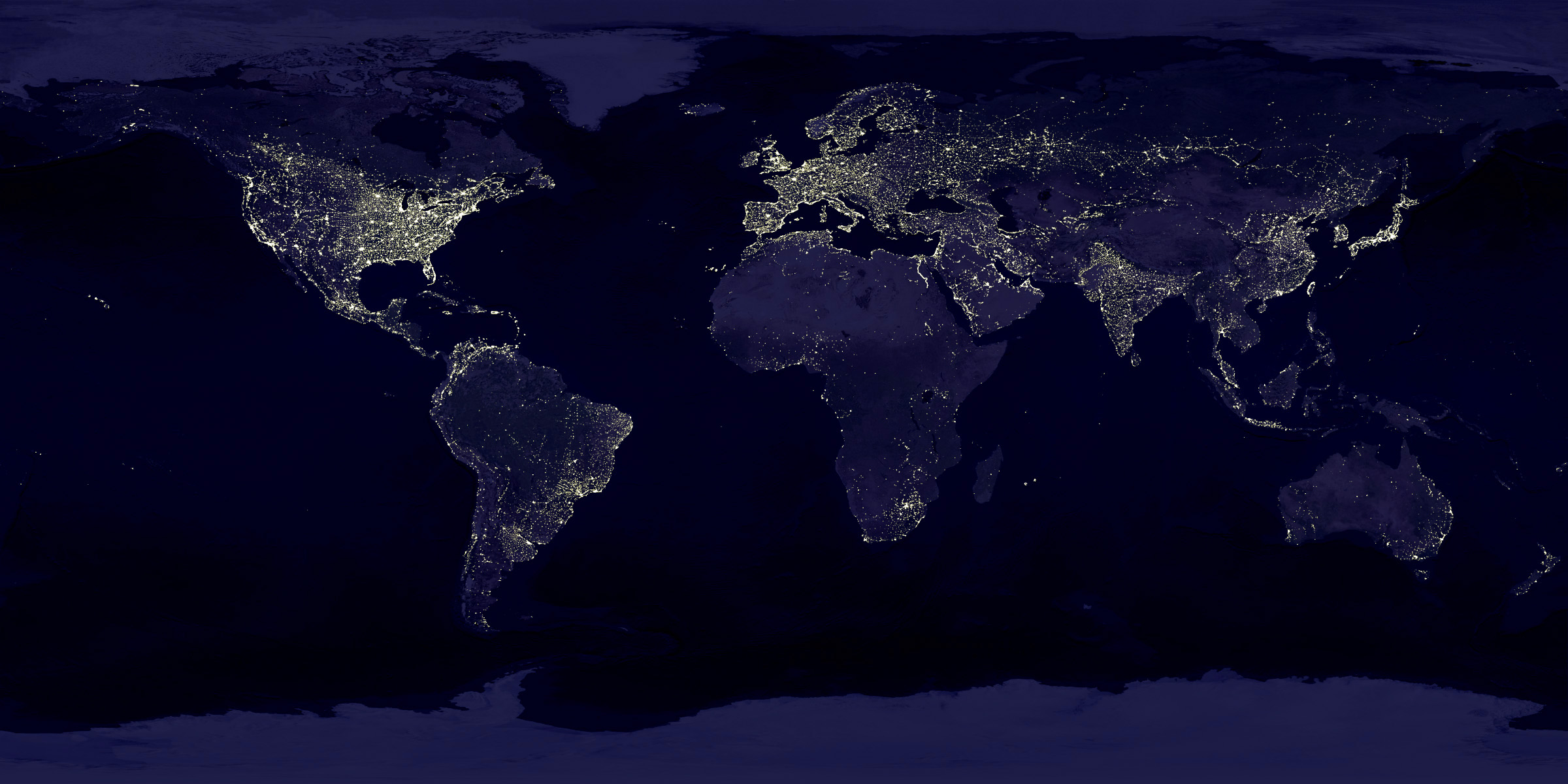 The World At Night (courtesy of Bert Christensen. Click to enlarge.)

Apparently some are bothered by the prospect that Africa could light up.

We Don’t Want What You Have (Wanna Bet?)

Many of those who would save the earth from the scourge of modern energy want us to believe that it is no big deal that as many as 1.5 billion people, more than three fourths of the population of the world’s poorest countries, lack any access to modern energy. They still use wood and charcoal for cooking, and sometimes a bit of kerosine for lighting. For most of these people the only realistic way to gain access to modern energy is to leave the village or town and move to the city.

Oh, the financial tests that rural electrification projects have to pass . . . . And then there’s the carbon footprint. No, people in sub-Saharan Africa don’t want air conditioning, running water or computers. Just ask the IPCC.

Or, you could ask the people who flock to the small number of enclosed shopping malls in Africa – even with no cash for purchases the air conditioning (and Wi-Fi) are nice.

The International Energy Agency has looked at the issue of energy poverty.  They conclude that for less than a 1% increase in CO2 output everyone in the world could be connected to the modern energy economy.

How Can Electricity Be Supplied To More People In Developing Countries?

South Africa, one of three sub-Saharan countries with universal electrification (the others are Namibia and Botswana), supplies electricity the old fashioned way: they burn coal for more than 90% of their electricity generation. Nuclear and (big dam) hydro provide the rest. Not for them the run of river hydro projects or rooftop solar collectors.

Most other countries in the region are overrun with proposals to erect wind farms, solar collectors, run of river hydro and the like. Nothing in this approach can provide a modern economy with energy. Pressed to sign on with renewable energy projects and incentivized by Clean Development Mechanism (CDM) revenues, the scarce human and business resources of Sub-Saharan Africa are diverted into schemes that do not produce much economic benefit for the country.

We have found elsewhere that this approach to energy does not produce the kind of electricity supply that is needed for industry. It is fine, however, for tourists (and keeps the wages of waiters and game preserve guides quite reasonable).

Current approaches to electricity supply in developing countries are mostly bankrupt. The methods tried after independence – state-owned monopoly with subsidized prices – did not work. The state-owned companies, with a few exceptions, are mostly broke, unable to invest in new capacity and suffering serious reliability problems.
As a result of the failure of the state enterprise approach to electricity supply, the continent’s repeated blackouts are almost immediately followed by the cacophony of hundreds of small generators starting up. Nobody thinks this is a good solution – small generators, using expensive fuel inefficiently – but governments mostly do not want to embrace the obvious alternative, private supply.

Sure, there are a lot of private IPPs (independent power producers) in the region, but few true private power companies. And how can there be when electricity prices are maintained by government regulators at levels below the cost of supply.

What is better: (1) to hold out the prospect of inexpensive electricity and supply dark bulbs and voltage fluctuations that break industrial machinery instead; or (2) to provide a steady supply of electricity at a higher price that is sufficient to pay for fuel, operations and spare parts?

Most people, if given a choice, would choose the second alternative. In an international energy career that has spanned 30 years and more than 80 countries I have yet to see anyone opt willingly for the first choice. Even in remote parts of Asia and Africa people pay more than ten times the price of grid power (which is not available mostly) for gasoline generators, charged-up car batteries (really, they are resupplied weekly or monthly depending on how remote the location) and “informal” (i.e., stolen from the grid) supplies of electricity. What do these supplies have in common? Electricity when you want it, not just when the sun shines, wind blows or water flows.

Even in poor villages in remote areas of archipelagic Asia the prospect of a “free” photovoltaic rooftop unit is met with a reply along the lines of “why can’t we have real electricity?”

Under the guise of a “pro-poor” policy framework, governments across the developing world have opted to keep electricity prices low. A government that raises prices without fixing the supply first (can’t be done because that takes money the governments do not have) is willing itself out of office, not a common choice among politicians.
However, there is hope. Gradually, countries are coming around to the idea that supplying reliable electricity costs money. After 20 or 30 years of purchasing power from gasoline-fueled small generators during blackouts, the public is also reaching the understanding that reliable energy costs money. But mostly it takes the inexorable laws of finance – if you subsidize something people will want more of it, and more than they are currently paying for, especially if they have been instructed that subsidized electricity is a “right.” As a result, in country after country the business of the government has gone over mostly to energy subsidies, with not a lot left over for roads, schools, health. Eventually the government has to call a halt to the subsidies because their creditors will not continue to lend against subsidized consumption (hmm, any portents here?). At that point the government gets “religion” on prices, investments and regulation, and starts on a long, slow road to economic reform. Such travelers on the road to reform can be found all over the world, but not in “Carbonhagen” or the pages of the New York Times, where the clarion cry of climate “compensation” rings out.

For years governments and their international advisors have assumed that poor people are not willing pay for reliable energy. They have never had a choice in the matter. They should, it is the only way to light up that map.