The International Monetary Fund (IMF) recently published a report urging the world’s governments to “reform” energy subsidies estimated at $1.9 trillion in 2011. Eliminating government policies designed to rig markets in favor of particular energy companies or industries is a worthy goal. Unfortunately, that’s not the agenda the IMF is pushing.

The IMF seeks to shame U.S. policymakers into enacting a carbon tax. Assuming $25 per ton as the “social cost of carbon” (SCC), the IMF claims the U.S. massively subsidizes coal, gas, and oil — simply by not taxing the carbon content of fuels. Our total energy subsidy is estimated to be $502 billion a year, making America the world’s biggest energy subsidizer!

Some may find the IMF’s terminology counter-intuitive, even Orwellian — as if not taxing carbon is a subsidy on a par with cash payments to politically-preferred companies or industries funded at direct taxpayer or ratepayer expense. If we consider just those wealth transfers accomplished by specific acts of government intervention, fossil fuels are among the least subsidized energies in the U.S.

More pertinently, observes the Institute for Energy Research, per unit of energy produced, subsidies for renewable energy vastly exceed those for fossil fuels. In the electric sector, for example, “solar is being subsidized by over 1200 times more than coal and oil and natural gas electricity production, and wind is being subsidized over 80 times more than the more conventional fossil fuels on a unit of production basis.” 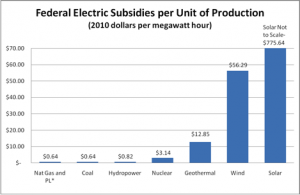 Source: IER (based on EIA data)

Carbon-taxers disclaim any intent to pick energy-market winners and losers, but that is in fact the core function of a carbon tax. As with cap-and-trade, the policy objective is to handicap fossil energy and, thereby, “finally make renewable energy the profitable kind of energy in America,” as President Obama charmingly put it.

Predictably, the IMF’s opposition to subsidies is selective. The IMF blames energy subsidies for “reducing incentives for investment in renewable energy,” yet abstains from criticizing or even mentioning renewable portfolio standards, renewable fuel standards, feed-in tariffs, and other forms of political favoritism without which national markets for renewable energy would not exist.

Why condemn only subsidies for fossil fuels? The IMF views fossil energy as a huge source of “negative externalities” — costs external to buyer and seller that are not captured by energy prices. Fossil-fuel extraction, processing, transport, and combustion undeniably have environmental impacts. But so do ‘green tech’ industries:

Scaling up these bit-player ‘green’ technologies to the point where they displace substantial quantities of fossil fuel could create very large, costly, and destructive externalities.

Among other corrective actions, the IMF recommends a $1.40 per gallon gasoline tax. Note, though, that a $25 per ton SCC estimate translates to a $0.22 per gallon tax. That’s not only well below $1.40/gal, it’s less than half the average combined federal and state gas tax ($0.48 per gallon). So to the fine folks at the IMF I say, “Been there, done that, we already gave at the gas pump!” 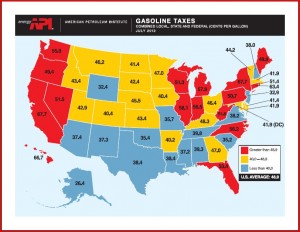 Note also that the price of gasoline increased by more than $1.40 since the early 2000s. So Americans have already paid the IMF’s proposed surcharge and then some. 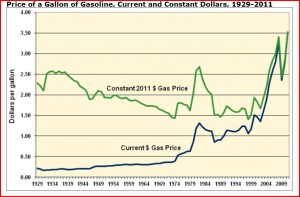 The IMF might retort that these criticisms misfire because (1) the purpose of gas taxes is to pay for infrastructure whereas the purpose carbon taxes is to limit environmental impacts, and (2) the rise in gasoline prices since 2000 serves no policy purpose whatever.

This rejoinder is beside the point. Whether the tax on motor fuel is called a carbon tax or a gasoline tax, it has the same effect on consumer behavior. However named, the tax puts downward pressure on demand for gasoline and makes alternative fuels and vehicles more competitive (or less uncompetitive). What the revenues are used for — roads and bridges, green tech R&D, deficit reduction — is a separate issue.

Similarly, consumers are motivated to spend less on gasoline and more on alternative fuels and vehicles whether pain at the pump is due to carbon taxes or high crude oil prices. Presumably the SCC today is about what it was in the early 2000s, so the market has already granted the IMF its wish to increase pain at the pump by $1.40/gal or more.

How, you may be wondering, does the IMF parley a $0.22/gal SCC into a $1.40/gal corrective tax? The chart below explains the IMF’s thinking. The IMF recommends a tax of $0.36 per liter, which converts to $1.36 per gallon (or $1.40 per gallon rounded up into a sound bite). The costs to be “corrected” include not only local pollution and carbon but also accidents and traffic congestion. Accidents and congestion are real costs but they have nothing to do with the carbon content of gasoline. If every car on the road today were replaced with an all-electric vehicle, there would still be accidents and congestion. 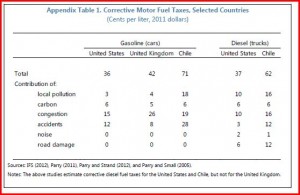 Gas taxes are a blunt instrument for addressing congestion. If they alleviate congestion at all, it is only by discouraging driving in general. The IMF calls this “efficient taxation” but you pay the same whether you drive at rush hour or 4:00 a.m., on the Washington Beltway or remote country roads. The efficient solution is commercial pricing of roads, especially modern electronic tolling with dynamic rates that rise and fall with changing traffic levels.

The future of gas taxes is dim even for their traditional purpose — funding basic infrastructure. Politicians commandeer the revenues for inefficient ear marks, and special interests divert fuel taxes for non-highway spending. Moreover, U.S. gasoline consumption has been declining since 2007, and the mismatch between road usage and fuel consumption will increase as federal fuel economy standards ratchet up. The IMF is pushing a policy Dodo.

As for accidents, the Census Bureau reports there were 6% fewer traffic accidents and 23% fewer motor vehicle deaths in the U.S. in 2009 than in 1990. That’s despite a roughly 24% increase in the U.S. population over that period. The fatality rate dropped nearly in half, from 2.1 to 1.1 fatalities per 100 million vehicle miles traveled. With accident rates falling and vehicles becoming safer all the time, we seem to be addressing this problem quite efficiently without new taxes.

A recent European Commission report, EU Transport in Figures 2012, contains additional evidence that fuel taxes and traffic safety are unrelated. Many European countries tax gasoline at $3.00 to $4.00 per gallon. Nonetheless, passenger transport (measured in kilometers) increased by 1.3% per year during 1995-2010 (p. 21). Similarly, EU road transport CO2 emissions increased by 23% during 1990-2009 (p. 128). In contrast, EU traffic accidents and road fatalities declined by 6.2% and 42.9%, respectively, during 1990-2010 (pp. 101, 105). The reduction in accidents is clearly not the result of tax-induced reductions in vehicle miles traveled, because both VMT and transport-related CO2 emissions increased.

At the risk of belaboring the obvious, consumers already have strong inducements to avoid unsafe driving — fear of death and injury, higher insurance rates, out-of-pocket expenses, litigation, fines, forfeiture of driving privileges. Unlike those factors, a new gas tax creates no incentives for safer driving.

If the IMF is really worried about accidents, it should help policymakers identify taxes that subsidize insurance rates for high-risk drivers. All that a $1.40/gal gas tax would accomplish is add about $740 to a low-income household’s annual motor fuel expense. Less affluent Americans will no doubt be grateful for such “efficiency.”

The series concludes tomorrow with a look at IMF’s treatment of the “social cost” of CO2 and PM 2.5 to justify a carbon levy. [Click here to read Part II of this post.]