“Pauses as long as 15 years are rare in the simulations, and ‘we expect that [real-world] warming will resume in the next few years,’ the Hadley Centre group writes…. Researchers … agree that no sort of natural variability can hold off greenhouse warming much longer.”

“Our prediction is that if past is prologue, the solar component will turn around and lead to rapid warming in the next 5 years,” says [GISS climate modeler David] Rind.”

Climate modeler David Smith of the Hadley Centre … says his group’s climate model forecasts … are still calling for warming to resume in the next few years as ocean influences reverse.”

Richard A. Kerr, the longtime, award-winning climate-change scribe for Science magazine, the flagship publication of the American Association for the Advancement of Science. said the “pause” in global warming was about to end.

He used this graphic: 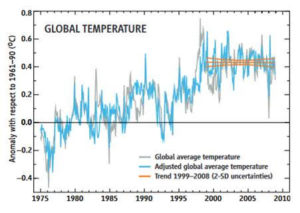 Yet nearly a decade later, real-world warming has been incremental and well below model-predicted. Tenths of a degree over decades of time is certainly proof of “global lukewarming,” not high-climate-sensitivity warming. The latest UAH Satellite reading is below: 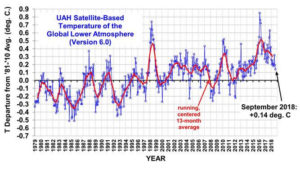 The article is a data point in the history of climate thought because it captures the overconfidence of climate modelers in their ability to understand and thus predict global climate change. Judith Curry’s reference to F. A. Hayek’s Nobel Prize Lecture in Economics, The Pretense of Knowledge, is right on in this regard. [1]

Secondly, a more recent cited explanation for the “pause” (a term used in Kerr’s 2009 article) is not mentioned back then—ocean delay.

Third, Kerr frames the debate in political terms with Copenhagen just ahead—and fails to interview or include the contrary views about how climate sensitivity might be less than the climate models assume in their physical equations. (And maybe now he wishes he had.)

Here are the guts of the Kerr article as its 10-year anniversary nears:

The blogosphere has been having a field day with global warming’s apparent decade-long stagnation. Negotiators are working toward an international global warming agreement to be signed in Copenhagen in December, yet there hasn’t been any warming for a decade. What’s the point, bloggers ask?

Climate researchers are beginning to answer back in their preferred venue, the peer-reviewed literature. The pause in warming is real enough, but it’s just temporary, they argue from their analyses.

A natural swing in climate to the cool side has been holding greenhouse warming back, and such swings don’t last forever. “In the end, global warming will prevail,” says climate scientist Gavin Schmidt of NASA’s Goddard Institute for Space Studies (GISS) in New York City.

The latest response from the climate community comes in State of the Climate in 2008, a special supplement to the current (August) issue of the Bulletin of the American Meteorological Society. Climate researcher Jeff Knight and eight colleagues at the Met Office Hadley Centre in Exeter, U.K., first establish that—at least in one leading temperature record—greenhouse warming has been stopped in its tracks for the past 10 years.

In the HadCRUT3 temperature record, the world warmed by 0.07°C±0.07°C from 1999 through 2008, not the 0.20°C expected by the Intergovernmental Panel on Climate Change. Corrected for the natural temperature effects of El Niño and its sister climate event La Niña, the decade’s trend is a perfectly flat 0.00°C.

So contrarian bloggers are right: There’s been no increase in greenhouse warming lately. That result came as no surprise to
Knight and his colleagues or, for that matter, to most climate scientists. But the Hadley Centre group took the next step, using climate modeling to try to quantify how unusual a 10-year warming pause might be.

In 10 modeling runs of 21st century climate totaling 700 years worth of simulation, long-term warming proceeded about as expected: 2.0°C by the end of the century. But along the way in the 700 years of simulation, about 17 separate 10-year intervals had temperature trends resembling that of the past decade—that is, more or less flat.

From this result, the group concludes that the model can reproduce natural jostlings of the climate system—perhaps a shift in heat-carrying ocean currents—that can cool the world and hold off greenhouse warming for a decade. But natural climate variability in the model has its limits. Pauses as long as 15 years are rare in the simulations, and “we expect that [real-world] warming will resume in the next few years,” the Hadley Centre group writes.

And that resumption could come as a bit of a jolt, says Adam Scaife of the group, as the temperature catches up with the greenhouse gases added during the pause.

Pinning the pause on natural variability makes sense to most researchers. “That goes without saying,” writes climate researcher Stefan Rahmstorf of Potsdam Institute for Climate Impact Research in Germany by e-mail. “We’ve made [that point] several times on RealClimate,” a blog.

Researchers may differ about exactly what’s behind recent natural climate variability, but they agree that no sort of natural variability can hold off greenhouse warming much longer. “Our prediction is that if past is prologue, the solar component will turn around and lead to rapid warming in the next 5 years,” says Rind.

Climate modeler David Smith of the Hadley Centre, who was not involved in the State of the Climate analysis, says his group’s climate model forecasts—made much the way weather forecasts are made—are still calling for warming to resume in the next few years as ocean influences reverse (Science, 10 August 2007, p. 746). Whether that’s in time to boost climate negotiations is anyone’s guess.

The ball is back in Richard Kerr’s court. Dr. Kerr, let’s have a five-year update for Science with a headline like “What Happened to Global Warming: Can Mainstream Climate Science Regain Its Footing?” His update might well take into account Judith Curry’s current post, IPCC AR5 weakens the case for AGW), that documented “several key elements … weakening of the case for attributing the warming [to] human influences:

[1] Curry quoted Hayek from his 1974 lecture: “I confess that I prefer true but imperfect knowledge, even if it leaves much indetermined and unpredictable, to a pretence of exact knowledge that is likely to be false.”