“The short-term rate of global sea level rise has decreased by about 25% since the release of the AR4—and a new paper shows that some 15% of the observed rise comes not from global warming, but instead from global dewatering…. [R]ather than raising its projections of sea level rise, perhaps the IPCC ought to consider lowering them once again.”

The Intergovernmental Panel on Climate Change (IPCC) is under pressure to revisit its projections of the expected amount of sea level rise by the year 2100. Many rather influential types are pushing for the IPCC to dramatically increase its central estimate by some 2-3 times above the value given in the IPCC’s Fourth Assessment Report (AR4).

Nature speaks with a contrary voice, political agendas aside. The short-term rate of global sea level rise has decreased by about 25% since the release of the AR4—and a new paper shows that some 15% of the observed rise comes not from global warming, but instead from global dewatering.

In light of all this, rather than raising its projections of sea level rise, perhaps the IPCC ought to consider lowering them once again (as it did from its from its First Assessment Report to its Second, and from its Second to its Third).

After the release of the IPCC AR4, skeptics were howling mad with the IPCC and its relatively modest projections of future sea level rise (I use skeptics here to refer to someone who is at odds with some aspect of the IPCC and its “consensus of 2,500 scientists”), claiming that the IPCC failed to consider the large amount of ice that was surely to be lost from Greenland and Antarctica as the temperatures (both land and ocean) there increased. But the IPCC defended itself via Dr. Richard Alley (one of the authors of the IPCC AR4 chapter dealing with sea level rise projections). Dr. Alley testified before the House Committee on Science and Technology shortly after the release of the AR4 concerning the state of scientific knowledge of accelerating sea level rise and pressure to exaggerate what it known about it. Dr. Alley told the Committee:

This document [the IPCC AR4] works very, very hard to be an assessment of what is known scientifically and what is well-founded in the refereed literature and when we come up to that cliff and look over and say we don’t have a foundation right now, we have to tell you that, and on this particular issue, the trend of acceleration of this flow with warming we don’t have a good assessed scientific foundation right now.

The IPCC did toss a bone to its skeptics by discussing the potential for “changes in ice dynamics” to “increase the contributions of both Greenland and Antarctica to 21st-century sea level rise” listing basal lubrication in Greenland and loss of glacial buttressing in Antarctica as possible mechanisms. In a back-of-the-envelope type of calculation, the IPCC determined that “if recently observed increases in ice discharge rates from Greenland and Antarctic Ice Sheets were to increase linearly with global average temperatures change, that would add 0.1 to 0.2 meters to the upper bound of sea level rise.” But, somewhat astutely, the IPCC added “Understanding of these effects is too limited to assess their likelihood or to give a best estimate.” I say “astutely”, because in the case of basal lubrication in Greenland, additional research has shown this not to be very effective at producing a large long-term acceleration of ice flow (e.g. Nick et al., 2009), and in the case of Antarctica, modeling work suggests that recent accelerations are not likely to be sustained (Joughin et al., 2010).

In its AR4, released in 2007, the IPCC had pretty modest sea level rise projections which ranged from about 18 cm (7.1 in.) to 59 cm (23.2 in.) with a central value about 38.5 cm (15.2 in.). But in the intervening years between the publication of the AR4 and now, a host of papers have been published which suggest that the most likely sea level rise by century’s end will be near, or even exceed 1 meter (e.g., Vermeer and Rahmstorf, 2009; Grinsted et al., 2009). And a new paper that NASA’s Jim Hansen has in the works suggests the “possibility of multi-meter sea level rise this century.”

Such findings have raised a far degree of alarm and resulting in growing pressure for the IPCC to reassess their TAR projections. And waiting until the IPCC Fifth Assessment Report to investigate the topic apparently is unacceptable. And so a movement is afoot to try to sneak some new sea level rise text into one of the other myriad “Special Reports” put out by the IPCC (which typically don’t draw as much attention as the their major Assessment Reports do—but I imagine that would change with the release of a major change in the projected rate of sea level rise). One potential outlet would be the IPCC’s “Managing the Risks of Extreme Events and Disasters to Advance Climate Change Adaptation (SREX)” that is scheduled for release in late 2011 or early 2010. I hope the IPCC resists this urge.

In reconsidering its existing sea level rise projections, the biggest thing that the IPCC needs to bear in mind—even bigger than the string of reports projecting a meter sea level rise by the year 2100—is what reality has to say.

There are at least three things that nature is telling us that I think the IPCC ought to pay attention to.

First off, the decadal rate of sea level rise has been decreasing.

Some may be quick to argue that looking at the rate of sea level rise for such a short period of time is not instructive, but to such people I would respond that the IPCC apparently found that it was instructive enough to include in the high profile Summary For Policymakers (SPM) section of the AR4 in which they had the following to say:

So if the 3.1 mm per year from 1993 to 2003 were interesting enough to be included in the SPM, then, keeping up with the decadal rate of change should be high on the IPCC’s to-do list.

And just in case they have let this slip, I include Figure 1 which shows the progression of the decadal rate of sea level rise as measured by the same source used by the IPCC, from the inception of the data in 1993 through the present. 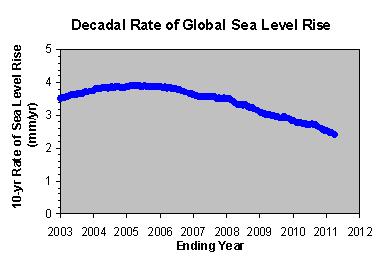 Figure 1. The trend in the decadal rate of sea level rise as measured by the satellite-borne altimeters from 1993 through March 2011. Note that these data have been revised since the IPCC AR4 such that the rates of sea level rise do not correspond exactly to those reported by the IPCC in its AR4 (data source and information about the data revisions: University of Colorado Sea Level Research Group)

A picture is worth a thousand words.

The rate of sea level rise for the most recent 10-yr period is 2.37mm/yr—a drop of nearly 25% from the value last reported by the IPCC.

On to number 2. A fair proportion of the sea level rise is not from global warming, but instead is from global dewatering.

What am I calling “global dewatering”? The pumping of groudwater for human use, the bulk of which finds it way into the global oceans instead of back into the aquifers where it came from. A new paper by Leonard Konikow of the U.S. Geological Society puts the total annual groundwater removal during the 2000s as ~145 cubic kilometers per year, which subsequently contributes about 0.40mm per year of sea level rise. And Konikow finds this amount to be on the rise (i.e., contributes an ever-growing amount to the rate of global sea level rise).

So of the 2.37mm/yr of observed sea level rise, ~0.40mm/yr—or about 15%—comes not from “global warming” but instead from our consumptive water use. Which leaves only about 2mm/yr from climate change—a value which falls comfortably in the range of sea level rise which characterizes the behavior during the 20th century. In other words—evidence for a recent acceleration of sea level rise is entirely lacking.

Which brings me to my third point for the IPCC to consider: there is a huge disconnect between current rates of sea level rise and the rate necessary to get to 1 meter by the year 2100. If the global sea level is going to be 1 meter (or more) higher in 89 years, it better get going. As of now, it needs to average 11.23 mm/yr or a rate that is about 5.7 times greater than the current rate to get to a meter by 2100.

But, as with most catastrophic climate change projections, there always seems to be an “out” when it comes to trying to use actual observations against wild projections. In Hansen’s “multi-meter sea level rise this century” paper, he helpfully includes the figure below (Figure 2), to explain why most of us will be dead before knowing whether he was right or not—instead of a linear increase in the rate of sea level rise, he suggests that it more likely will be exponential and all sneak up on us during the last few decades before 2100. 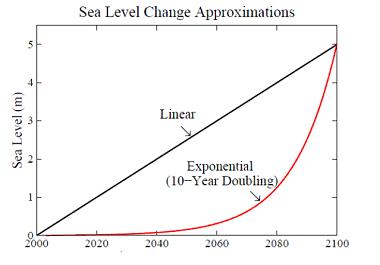 Well, if Hansen is right, hopefully we’ll have figured out a way to deal with it by then. And if he is wrong, then business-as-usual seems to be plenty sufficient to handle what is to come. (Note: in the real world, exponential changes are usually not sustainable).

All this to say that the IPCC has its job cut out for it when it comes to reassessing its projections of 21st century sea level rise.

Instead of racing upwards, the global sea level is plodding a way along at a rate that that will only produce an additional ~20 centimeters (~8 inches) of rise between now and century’s end.

So, instead of the IPCC authors trying to justify a meter or more, it seems like they are going to have to work hard just to defend the AR4 mean value of 39 cm (15 inches).