[Editor’s note: This is Part II (Part I here) of a two-part analysis examining projections of increasing human mortality to accompany projections of increases in temperature resulting from greenhouse gas emissions produced from burning fossil fuels to produce energy. Such studies typically give short shrift to the effectiveness of rather simple adaptations and the power of cheap, and reliable electricity.]

In my post yesterday, I discussed the seemingly incongruent fact: the more frequent heat waves, the fewer the number of people who die from them. This results from adaptive measures that the people who live in hot places incorporate into their lifestyles. These adaptations include access to air-conditioning which is facilitated by the availability of cheap, reliable, and abundant electricity.

Today, I’ll look more in detail at a new paper which projects a rapid rise in human mortality across Europe to accompany projections of rising temperatures there—contrary to observations.

Underplaying our adaptive power and our innate desire not to want to die is essential in order to support such a finding, and this way of thinking (along with some misapplied statistics) is on display in the just-published paper by Joan Ballester and colleagues which appears in the new journal Nature Communications. And just in case this idea is not readily apparent in the actual article, the Associated Press’ Seth Borenstein—not one to let a good global-warming-is-going-to-be-bad-for-you story pass by—played up the negative and played down the positives in his widely distributed coverage “Heat will kill more than cold in Europe, eventually.” The ‘independent’ expert on Seth’s go-to list on heat-related mortality, Jonathan Patz, is happy to oblige Seth’s want of confirmation of the study’s conclusions that rising temperatures are going lead to rising temperature-related mortality and goes on to add that this new study “is really an essential paper in the field of climate change and health.”

Had Seth interviewed me, he would have gotten a completely different take.

Something like, “This new study is statistically flawed, based on overly pessimistic assumptions, and as such, does not give a proper perspective on the future relationship between climate change and temperature-related mortality. The prospects for the future are much brighter than this paper portrays.”

But such logic will get you in trouble and lead to incorrect suppositions and results—as it has in the case of Ballester et al. study.

For example, Figure 2 is taken from their paper and apparently shows a strong relationship between daily temperature and daily mortality. This roughly U-shaped relationship suggests that lower temperatures lead to elevated mortality and higher temperature lead to elevated mortality, with a minimum somewhere in the middle. And Ballester et al. model this apparent relationship for locations across Europe. Then, using temperature projections from the 21st century produced by climate models run with increasing greenhouse gas concentrations, they produce mortality projections under for the future climate conditions. 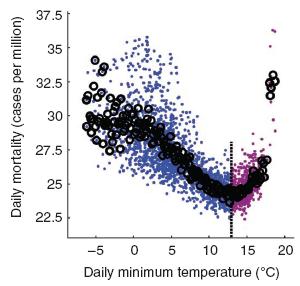 But like I said, the relationship that they are observing is incorrectly captured by their statistical model. In fact, daily temperature only detectably influences daily mortality on a few of the hottest days of the year in some places. And the impact of even monthly temperatures is debatable. 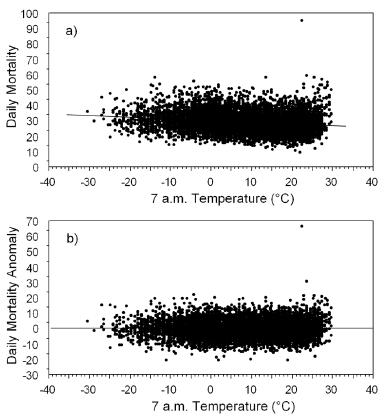 Now you might say, well aren’t the two (temperature and season) closely related? Well, yes and no. In the Northern Hemisphere, it is colder in the winter than it is in the summer, but it is not always the case that the temperature is dangerously cold in the winter or dangerously hot in the summer. A good example of this is to consider the mortality seasonality observed in Detroit, Michigan with that in, say, Miami, Florida (Figure 4). In both cases, the seasonally amplitude of mortality is similar—about 3 more people die on an average winter day than on an average summer day in both locations. But, the average winter morning temperature in Miami is not that dissimilar from the average summer morning temperature in Detroit. In fact, the average low temperature during the winter in Miami is about 65°F (18.5°C)—not all that different from what many folks set their thermostats to in the winter. The cold is not killing people in Miami. 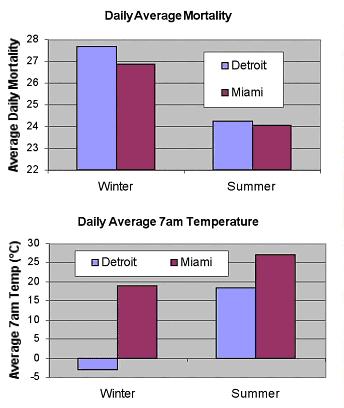 Figure 4. (top) Average standardized daily mortality (per million people) during the winter (December-February) and during the summer (June-August) for the cities of Detroit and Miami. (bottom) Average daily 7am temperature during the winter and summer for the same locations (data from Davis et al., 2004).

This is what we wrote in our paper:

After de-seasoning the data by subtracting from each observation the median mortality rate for the month in which it occurred, the summer mortality peak becomes even more pronounced but the winter peak is diminished [Figure 3b above]. This result, which is consistent across all cities examined, suggests that there is little relationship between daily weather and mortality in the winter despite winter’s higher overall death rate. Although some winter research has uncovered relationships between extreme cold and mortality at time lags of 1 wk or more (Laschewski & Jendritzky 2002), the excess mortality is small and the relationship does not seem to be universal (Glass & Zack 1979, Larsen 1990a,b, Frost & Auliciems 1993, Gorjanc et al. 1999). These seasonal-mortality patterns produce the apparent quandary that, whereas cold days are not associated with high mortality, winter months are. [emphasis added]

[T]here are few intercity (or climate-related) differences in mortality seasonality across the US—in other words, the average annual mortality cycle, which is similar across US cities, is largely independent of climate. The overarching implication of this result indicates that there is no net mortality benefit to one’s place of residence derived from the location’s climate. This finding is apparently contrary to the general perception within the populace that one’s longevity can be increased by moving to warmer locales. [emphasis added]

Or if the climate itself warms.

So, the commonly-held belief, that since more people die in the winter than in the summer, climate warming will lead to fewer deaths, is by and large a myth—born from an improper analysis and understanding of the data.

And it is this myth that is perpetuated by the analysis of Ballester et al. and the reporting of Seth Borenstein. But Ballester and Borenstein even take it one step further by claiming that this (largely false) “benefit” of global warming will, within a few decades, be eclipsed as heat-related deaths increase faster than cold-related deaths decline under a typical global warming scenario.

To be fair, the Ballester team actually does perform an analysis which examines the sensitivity of their results to varying scenarios of adaptation. What they find, is that under the assumption that people quickly adapt to rising temperature, the future temperature-related mortality declines as the climate warms (just like I said). However, Ballester et al. are quick to dismiss this result as entirely improbable as they discount the probability that human populations can adapt at the pace necessary to keep up with the rising temperatures. Interestingly, in their list of citations, they include neither Palaecki et al. (the Chicago study) nor Fouillet et al. (the France study) which clearly demonstrate a high level of adaptation occurring with the period of only a few years.

That is, until it kills you.

To avoid such a fate, my suggestion it to adapt to the ever-changing world around you.

For the case of dealing with rising temperatures across Europe, I would think that increasing the availability of air-conditioning would be a good place to start. I imagine that more Europeans would be more open to this solution if only the price of electricity weren’t so darn high.

So, the bottom line:

People don’t really die in high number from the cold. It is heat that really gets you. But avoiding the heat (at least to the degree necessary to avoid dying), is fairly straightforward (and made easier by access to cheap and reliable electricity). And the more you face the heat, the better prepared you become, and the less your chance of dying. So, if global warming pushes the thermometer up, it should push mortality down.

That doesn’t sound like such a bad outcome–let’s hope the do-gooders (like the EPA and folks advocating for greenhouse gas emissions controls) don’t mess things up.