[Editor’s Note: This is Part I of a two-part analysis examining projections of increasing human mortality to accompany projections of increases in temperature resulting from greenhouse gas emissions produced from burning fossil fuels to produce energy. Such studies typically give short shrift to the effectiveness of rather simple adaptations and the power of cheap, and reliable electricity.]

Increased use of air-conditioning, made possible by access to affordable, reliable electricity, goes a long way towards counteracting the acute effects of excessive heat events, a.k.a. heat waves, on human mortality and morbidity. Projections of rapidly rising human heat-related mortality under a warming climate, such as those made in a recent paper published by Joan Ballester and colleagues, fail to acknowledge the power and reality that this and other (even simpler) adaptations can have at protecting human life.

When it comes to energy and climate policy, one cannot make an ‘other things equal’ assumption. More climate policy means less energy, period.

As an increasing frequency, intensity, and duration of heat waves is anticipated as the climate warms from the combination of a build-up of atmospheric greenhouse gases and growing urban and suburban environments, expanding the availability of affordable, abundant, and dependable energy should be one of our highest high priorities. Instead, there is a deluge of proposals (in part fuelled by results like those of Ballester et al.) aimed at limiting the emissions of greenhouse gases produced from the combustion of fossil fuels—actions which threaten the quality and quantity of our energy supply, and thus run counter to the practices which best allow adaptation to climate and climate changes.

Thankfully, of the many proposals which have been, well, proposed, only one with any teeth has really stuck (thus far)—the U.S. Environmental Protection Agency now has the ability to regulate the emissions of greenhouse gases, an ability which was predicated by its finding that such emissions “threaten” our “health and welfare.”

From where I sit, our health and welfare is more under threat by regulations, laws, and/or treaties which (would) act to hold one hand behind our back as we try to best protect ourselves from the vagaries of climate (and to a far lesser degree, climate change). And the justifications for doing so ring hollow, as virtually all analyses of the impacts of such proposals show them to be ineffective at producing any meaningful mitigation to projected climate changes—that is, without the bulk of the work being done by developing countries such as China and India. Of course, developing countries realize that the positives from expanding the availability of affordable and reliable electricity, including the adaptive power that they afford us, outweigh the negatives from climate changes that any resultant greenhouse gas emissions may produce. Therefore, electricity from fossil fuels continues to lead the way into the future.

For some reason, a lot of people seem to doubt, or at least greatly underestimate, the innate desire of humans not to want to die. How else can you explain future projections of heat-related mortality that predict an ever-rising number of deaths as the temperature increases? Especially in light of the fact that observations from the real world clearly show that the more frequent extreme heat becomes, the fewer people die from it?

But real world observations of adaptation seem to have done little stem the tide of projections of increasing heat-related mortality. The U.S. EPA incorporates them into the justification for their endangerment finding, and a new paper making the rounds is making dire projections for Europe.

The only way to predict more deaths from more heat is for researchers to dig their heels in and doggedly assume that the way people react to high temperatures now is the way that they will forever, and thus they will die in record numbers as high temperatures occur more often. I guess this is the “dumb people scenario” which is akin to the “dumb farmer scenario” that similarly leads to projections that we’re all going to die from lack of food as the climate changes and farmers don’t adjust their crops, planting methods, etc.

Basically, the way to make the future look bad is to paint coming conditions different than today’s while assuming that today’s behaviors remain unchanged. No doubt that is a recipe for disaster, for humans and everything else, but it is just not the way things work—if it were, the earth would be a pretty lifeless place, as conditions are in a constant state of change. Our very existence proves that we are not “dumb.”

And if the philosophical argument doesn’t sway you, here is some actual data on the evolving relationship between extremely high temperatures and human mortality.

Research study after research study reveals two strong patterns—one spatial and the other temporal—of heat-related mortality across the United States. The first is that the hottest places in the country are the places with the least amount of heat-related mortality. The second pattern is that over time (even as temperatures rise), the rate of heat-related mortality declines. In fact, the declines are the greatest in the years immediately following major heat-waves in which a lot of people die. These patterns are strong indication that people not only adapt to high temperature extremes, but that such adaptation can occur in a very short amount of time.

Figure 1 (taken from a paper I was a co-author on) nicely illustrates these two patterns in the U.S. Notice that 1) the places with the hottest summer climate have the lowest rate of heat-related mortality—places such as Phoenix, Dallas, Houston, New Orleans, Tampa, Miami; and 2) that over time, the rate of heat-related mortality (in a standardized population) has declined across nearly all of the cities that we studied—despite rising summer temperature. 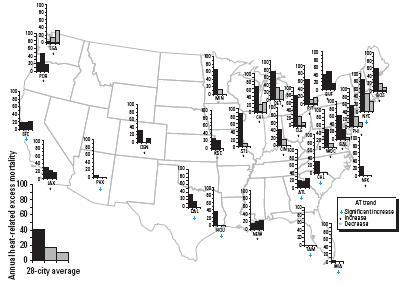 Figure 1. Annual heat-related mortality rates (excess deaths per standard million population on days in which the decadal-varying threshold apparent temperature (AT) is equaled or exceeded) by city and decade, and long-term trend in summer afternoon AT. Each histogram bar indicates a different decade: from left to right, 1960s–1970s, 1980–1989, and 1990–1998. Decades without histogram bars exhibit no threshold ATs and no heat-related mortality. Decades with gray bars have mortality rates that are statistically significantly different from the decades indicated by black bars. The average excess deaths across all 28 cities is shown at the lower left. AT trends are indicated beneath each city abbreviation. Click to enlarge. (source: Davis et al., 2003)

That a decline in heat wave sensitivity can occur rapidly following a wake-up call type of event (i.e., a major heat wave that kills a lot of people because they were not adequately prepared for it) is evidenced from the greatly depressed mortality response during the next big heat wave to hit the same location. This has been documented to have taken place in Chicago after the 1995 heat wave (Palecki et al., 2001) and in France after the 2003 heat wave (Fouillet et al., 2008).

So, with these two pieces of information in hand—hotter places have lower mortality rates and mortality rates are declining over time (even as temperatures rise)—how would you go about forecasting the evolution of the patterns of heat-related mortality in the future assuming a warming climate?

Well, I would think that as the temperature climbs, humans will increasingly try to avoid dying from it. The more commonplace heat waves become, the better we will become at dealing with them (as current patterns indicate). Certainly, there would be a few surprises in places not used to experiencing extremely high temperatures—like Chicago in 1995 and Europe in 2003—which will sharply elevate the numbers of heat-related mortality during those particular individual events, but I imagine that folks will pretty quickly learn what not to do and will be much better prepared when the next heat wave comes around. Over the long run, then, I would project that hotter summers will lead to lower rates of heat-related mortality (in a standard population—that is, not taking into account changes in population demographics such as age structure—which are not climate-related changes).

But this is not how some other folks seem to see things—especially those who are of the pre-disposition to think that human-fuelled global warming is a bad thing. Their take on things is something like this—assume that the existing relationships between high temperatures and heat-related mortality remain constant (or are slow to change), and therefore projections of higher future temperatures lead directly to projections of sharply rising heat-related mortality. Such is the methodology used by the EPA to justify their finding that human emitted greenhouse gases act to “endanger” human health and welfare:

“The impact on mortality and morbidity associated with increases in average temperatures, which increase the likelihood of heat waves, also provides support for a public health endangerment finding.”

And this way of thinking is on display in the just-published paper by Joan Ballester and colleagues which appears in the new journal Nature Communications. And just in case it is not readily apparent in the actual article, the Associated Press’ Seth Borenstein—not one to let a good global-warming-is-going-to-be-bad-for-you story pass by—played up the negative and played down the positives in his widely distributed coverage “Heat will kill more than cold in Europe, eventually.” The ‘independent’ expert on Seth’s go-to list on heat-related mortality, Jonathan Patz, is happy to oblige Seth’s want of confirmation of the study’s conclusions that rising temperatures are going lead to rising temperature-related mortality and goes on to add that this new study “is really an essential paper in the field of climate change and health.”

Had Seth interviewed me, he would have gotten a completely different take.

Tomorrow, I’ll tell you why.