“Professor Christy is an excellent choice for EPA’s Science Advisory Board. And if you doubt me, please read the quotations below that DeSmogBlog has put up on its website to purportedly discredit Secretary Wheeler’s choice. Christy’s views are mainstream in the world that most of us live in.”

John R. Christy is a professor of Atmospheric Science and Director of the Earth System Science Center at the University of Alabama in Huntsville. He’s a vocal critic of climate change models and has testified on numerous occasions against the mainstream scientific views on man-made climate change. Christy has affiliations with a number of climate science-denying think tanks, including the Heartland Institute and the Cato Institute. And now Andrew Wheeler has appointed him to serve on the U.S. Environmental Protection Agency’s Science Advisory Board.

Professor Christy is an excellent choice for EPA’s Science Advisory Board. And if you doubt me, please read the quotations below that DeSmogBlog has put up on its website to purportedly discredit EPA Secretary Wheeler’s choice. Christy’s views are mainstream in the world that most of us live in.

“The real world is not going along with rapid warming. The models need to go back to the drawing board.”

“[W]e are not morally bad people for taking carbon and turning it into the energy that offers life to humanity in a world that would otherwise be brutal (think of life before modernity). On the contrary, we are good people for doing so.”

“Carbon dioxide makes things grow. The world used to have five times as much carbon dioxide as it does now. Plants love this stuff. It creates more food. CO2 is not the problem.… There is absolutely no question that carbon energy provides with longer and better lives. There is no question about that.”

“If you choose to make regulations about carbon dioxide, that’s OK.  You as a state can do that; you have a right to do it.  But it’s not going to do anything about the climate. And it’s going to cost, there’s no doubt about that.”

“…it is fairly well agreed that the surface temperature will rise about 1°C as a modest response to a doubling of atmospheric CO2 if the rest of the component processes of the climate system remain independent of this response.”

“As far as the [2003 American Geophysical Union statement], I thought that was a fine statement because it did not put forth a magnitude of the warming. We just said that human effects have a warming influence, and that’s certainly true. There was nothing about disaster or catastrophe. In fact, I was very upset about the latest AGU statement [in 2007]. It was about alarmist as you can get.”

“We utilize energy from carbon, not because we are bad people, but because it is the affordable foundation on which the profound improvements in our standard of living have been achieved – our progress in health and welfare.”

In a 2003 interview with the San Francisco Chronicle, Christy describes himself as  “a strong critic of scientists who make catastrophic predictions of huge increases in global temperatures and tremendous rises in sea levels.”

“It is scientifically inconceivable that after changing forests into cities, turning millions of acres into farmland, putting massive quantities of soot and dust into the atmosphere and sending quantities of greenhouse gases into the air, that the natural course of climate change hasn’t been increased in the past century.”

The above quotations are neither radical nor errant. They are middle-of-the-roadish. John Christy knows that the climate changes and humans have a warming impact (good news indeed). And yes, the climate models are overpredicting real-world warming, a divergence that is growing, not contracting, as his iconic graph shows. 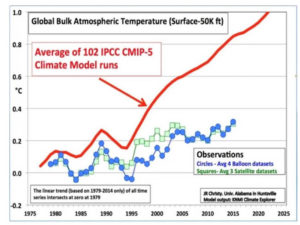 If Professor Christy sounds like a rational scientist working in a very unsettled field, you are correct. No “pretense of knowledge” here. Compare him to the know-it-all alarmist climatologists such as Andrew Dessler at Texas A&M, whose challenge to Texas Gov. Abbott was critically reviewed last week at MasterResource.

In fact, Dr. Christy (neutral profile here) is a global lukewarmer swimming upstream in a sea of Malthusian snowflakes, defined as those who think that the natural climate is optimal and that change cannot be good. (As Professor Dessler states: “… when it comes to climate, change is bad.” [1])

A polite, learned scientist, John Christy has to be among the most likeable physical scientists you will meet. (He was a star at a Houston Forum Climate Summit back in 1999, another story.) May America get to know him better in his new role.