“China’s new strategy is to rely mostly on a switch from ‘dispersed coal’ to clean coal, bolstered by generous doses of natural gas and all of the above—and more natural gas storage.” (Xizhou Zhou)

It was an article that contradicted the mainstream media story about how China energy policy is all about going ‘green giant’ in renewable energy (such my criticism of Amy Myers Jaffe). Donn Dears, too, jumped on Zhou’s piece in “The Truth About Coal, China, and Smog.”)

Basically, China is going clean coal, as in applying modern pollution control technology to reduce real pollutants (CO2 is not a pollutant in the classic sense). Zhou begins:

“Battle for the Blue Skies” has become an imperative for China, as it seeks to curb the pollution that’s been a byproduct of its rapid economic growth. But this massive undertaking led to unintended consequences—a natural gas crisis that dramatically impacted global gas markets and shifted the anti-pollution campaign towards “clean coal.”

He provides the background:

During the winter of 2012-13, media outlets across the world covered the “airpocalypse” that blanketed Beijing and surrounding regions. Photos of people walking dogs on leashes—but who couldn’t quite see their pets—surfaced on social media. The increasingly affluent Chinese public demanded relief, and the central government acted swiftly, issuing a sweeping “Action Plan on Prevention and Control of Air Pollution.” The aim was to achieve real results in five years.

And how did China’s energy sector respond? In a word, “quickly.”

But more than this, explains Zhou, there was a gas-for-coal substitution, even “frenzy.”

In early 2017, the Ministry of Environmental Protection (MEP) recognized there were only a few short months left to meet the deadlines set out in the Action Plan. They had to look for emission reductions in new places.

Starting in the spring of 2017, officials issued orders to shut down these facilities, and—when they did not trust the operator to stay closed—even hired crews to dismantle the equipment. Local cadres quickly fell in line and sent a firm message to facility owners: switch to gas or stop operating.

The results were noticeable.

This did the trick. As the heating season began in November 2017, northern China’s residents experienced consecutive blue sky days, without even a yellow alert. Many first-time visitors to the Chinese capital wondered where the infamous Beijing smog had gone.

There was, however, a problem: many communities were literally left in the cold. Their boilers could no longer burn coal, but there wasn’t enough natural gas. The situation quickly escalated, and reports circulated of school children sitting in freezing classrooms and surgical procedures delayed because of frigid temperatures in hospitals.

What had not been understood was that China lacked the underground gas storage to manage seasonal demand fluctuations—certainly not at the scale needed by the 2017 coal-to-gas conversion campaign. China was experiencing a natural gas crisis.

In a section of his article titled “coal-to-coal” switch, Zhou zeros in on China’s least reported energy strategy:

To many people’s surprise, the most important source identified in the [Action Plan on Prevention and Control of Air Pollution] was “clean coal burning.” This meant large, centralized coal facilities equipped with state-of-the-art pollution controls. The vast majority of China’s coal-fired electric power plants fall into that category today.

With clear skies continuing throughout the winter, residents noticed steam again coming out of the giant cooling towers at one of the mothballed coal plants in southeastern Beijing. The Gaobeidian plant had previously been shut down as part of the government effort to eradicate coal burning in the city proper. But authorities decided that given its high efficiency and modern pollution control equipment, the Gaobeidian plant should switch back on. This allowed gas to be diverted to places where centralized heating infrastructure was not in place and gas was the only alternative. In effect, the clean air campaign was now relying on a shift from “dispersed coal” to “clean coal,” instead of the prior widely held mantra of “coal to gas.”

Over the next four years, the government will continue to allow more combined heat and power coal plants to operate in northern China. As a result, floor space heated by “clean coal burning” is projected to more than triple by 2021 (see chart). Substitution of this kind will actually reduce overall coal consumption, because large plants are more efficient than dispersed small boilers. It will also lower the associated carbon emissions.

Zhou provides the graphic below: 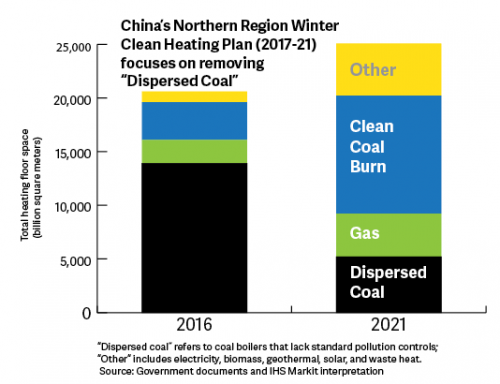 Gas remains part of the solution, but not as much as clean coal. By 2021, gas is projected to account for 16 percent of floor space heated, compared with 44 percent for clean coal. The plan also stipulates that other heating sources should be considered when possible, including biomass, geothermal, and electricity. The Clean Heating Plan thus pursues an “all-of-the-above” strategy that relies on any source of energy with zero or low emissions.

The 2017-18 natural gas crisis resulted from China’s aggressive efforts to curb air pollution and an initial assumption it could rely mostly on switching from coal to gas. The infrastructure required to make a wholesale switch like this was not yet in place, leading to a shift. China’s new strategy is to rely mostly on a switch from “dispersed coal” to clean coal, bolstered by generous doses of natural gas and all of the above—and more natural gas storage.