“The Canadian federal government’s decision about Trans Mountain on December 19th will be an important milestone for the nation’s energy business. There are still numerous other policy decisions that must be addressed before Canada develops a full-scale oil and gas export expansion regime, but the first steps appear to have been taken last week.”

“Despite being the ‘environmental’ prime minister, Mr. Trudeau is recognizing that without more oil and gas export opportunities, his nation’s economy, which depends on a healthy energy economy, will suffer with many social and financial repercussions.”

Canada’s challenge has been its limited access to world oil markets for its prolific oil and gas output. By being tied almost exclusively to the United States, where it is the third largest supplier, Canada often suffers from price discounts due to its oil quality and the distance from America’s refining centers. The explosion in oil shale output in the United States had the effect of dampening demand for Canadian oil imports along with imports from other countries around the world.

Canadian oil producers receive a wellhead price that is usually discounted from the spot market prices of West Texas Intermediate (WTI) oil at Cushing, Oklahoma, the crossroads of the U.S. oil business. Exhibit 1 below shows a set of monthly oil prices since the start of 2014.

This chart shows the monthly price for Brent, WTI, Canadian light oil and Western Canadian Sweet (WCS) prices.  The WCS price differential compared to WTI widened during 2014, but then closed in early 2015.  Starting in the second half of 2015, the gap between the prices widened again and the gap has remained stable up to the most recent monthly data available.

The challenge for the Canadian oil industry has been finding more market access options as possible for their output. The problem is that there is a limit to the pipeline capacity into the U.S. and for shipping oil volumes to the East and West Coasts. The increased use of rail cars to ship oil, although more expensive per barrel moved than moving barrels by pipelines, provides optionality for producers to send their output to other markets where they could obtain the best prices.

The oil industry in Canada has been proposing new export pipelines. What has happened, however, is that political and social objections have become significant barriers to the approval of these proposed pipeline projects. Exhibit 2 shows the major proposed pipeline projects along with the existing major pipelines in North America.  The liberal political leadership at Canada’s federal government level along with the government of the Province of Alberta have further added to the industry’s struggles for gaining pipeline approvals. 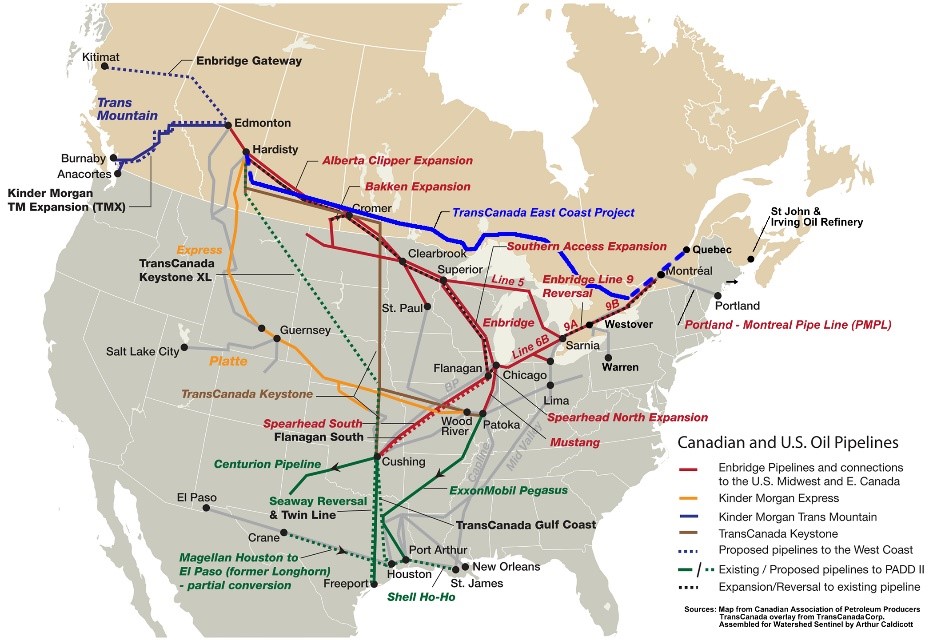 The most recent development in these pipeline struggles was the announcement last week of a federal marine safety program. Prime Minister Justin Trudeau announced a $1.5 billion plan to ensure better protection from potential oil spills for Canada’s coasts.  The new program was announced only a few weeks ahead of the federal government’s scheduled decision on Kinder Morgan’s (KMI-NYSE) Trans Mountain pipeline expansion in Western Canada.

The C$6.8 (US$5.4) billion project is designed to increase the volume of oil sands output from Alberta that can be transported to Vancouver for shipment to world markets.  The number of oil tankers that will be leaving Vancouver following the pipeline expansion will increase sevenfold.

The pipeline project was approved by the National Energy Board (NEB) in May and recommended to the federal government for its final approval. However, the project was approved by the NEB with 157 environmental and operational conditions attached.  These conditions, which would be enforced by the NEB, covered a wide range of topics, including: safety and integrity of the pipeline; emergency preparedness and response; protection of the environment; ongoing consultation with those affected, including Aboriginal communities; socio-economic matters; affirmation of commercial support for the Project prior to construction; and financial responsibility.

One of the major concerns of the Province of British Columbia over the expansion of the Trans Mountain pipeline was the protection of their waters. This new marine program proposed by Prime Minister Trudeau addresses those concerns.  One of British Columbia’s five conditions that needed to be met to win the province’s approval was creating a “world leading” oil spill response regime.  The Trudeau plan will fund a strengthening of the Canadian Coast Guard, add tougher industry pollution rules, increase funding for coastal habitat restoration and create laws increasing vessel owner responsibility.

British Columbia Premier Christy Clark has listed 11 gaps in marine safety that needed to be filled in order for the province to support more pipelines and other heavy-oil projects. One aspect involves building three new salvage tugs at a cost of $25-$50 million each that would be based at Vancouver, Kitimat and Port Renfrew along with a new Coast Guard station in Prince Rupert.

It appears that the new ocean-protection plan is part of an organized approach for dealing with the objections to the construction of new oil export pipeline capacity to help Canada’s oil industry tap global oil markets and earn higher returns. In reacting to these developments, the Calgary Herald wrote the following in an editorial about the new coastal protection plan:

It’s a good thing pipeline approvals aren’t up to [B.C. Premier] Clark or other B.C. politicians who refuse to be reasonable when it comes to the need for Canada to get more of its oil to tidewater, so it can fetch a higher price. The lack of pipeline capacity is costing the national economy dearly, and it appears the Trudeau government acknowledges project approvals are in the best public in the best public interest.  Sadly, there’s no persuading some special interest groups of the necessity of building pipelines.

Now one might say that a newspaper based in Calgary, Alberta, has an axe to grind because its oil business is the most impacted by the pipeline roadblocks. On the other hand, Canada’s economy is suffering from the impact of the roadblocks, too.

Another issue that has yet to be addressed is a proposed ban on oil tankers operating off British Columbia’s coastline that would effectively shut down the development of an oil export terminal at Kitimat and thus kill the proposed Enbridge (ENB-NYSE) Northern Gateway oil export pipeline. If the tanker ban is put in place, it will force the development of the Trans Mountain pipeline as the primary West Coast oil export pipeline.

That would leave the Trudeau government to deal with TransCanada Corp.’s (TRP-NYSE) Energy East oil pipeline project to move Western Canadian oil to the East Coast where it could be exported to the U.S. East Coast or Europe. Despite being the “environmental” prime minister, Mr. Trudeau is recognizing that without more oil and gas export opportunities, his nation’s economy, which depends on a healthy energy economy, will suffer with many social and financial repercussions.

The Canadian federal government’s decision about Trans Mountain on December 19th will be an important milestone for the nation’s energy business. There are still numerous other policy decisions that must be addressed before Canada develops a full-scale oil and gas export expansion regime, but the first steps appear to have been taken last week.