In California the Democratic Party, in near monopoly power in the state, have for the past two decades been underfunding big water infrastructure projects and diverting water from farms to fish. They have been taking credit for the moral high ground of allegedly saving a few fish from threatened extinction at the cost of four billion gallons of water per fish.

But now that there is four-year long green drought they want to place blame for it on others.

To keep the political heat off the party in power, the major newspaper media have been projecting blame on farmers, wealthy cities; desert retirement communities; the Republican bastion of San Diego; and anywhere Democrats don’t live. To heck with journalists speaking truth to power, do anything to keep from being blamed for the green-caused water shortage of 2012–2015.

Since 2000, California has denied the reality of drought by squandering $18.7 billion from five water bonds on a mess of nature land acquisitions, environmental studies, wetland restorations, non-water agencies, and the Ocean Protection Council, a jobs programs for underemployed marine biologists, without any water produced.

This discombobulation of reality has been so institutionalized in public perceptions that it is now its own reality. The myth that agriculture uses 80 percent of all system water in California is now so taken for granted that it is considered undisputable fact.

But let’s take a couple of the most recent big newspaper headlines on the drought and try to separate media perception from reality.

“Rights to River Water Exceed Supply” (But Why?)

Los Angeles Times opinion writer George Skelton’s April 13 article, “In California, Water Rights Exceed Supply,” is a case in point. Skelton claims that farmers’ exercise of their rights to river water have become a “perceived reality”. But there is a reason why river water is over-allocated in dry years in California: the volatility of rain and snowpack.

Below is a bar chart from the National Resource Conservation Service showing the percentage of normal snowpack in California from 2005 to 2015. 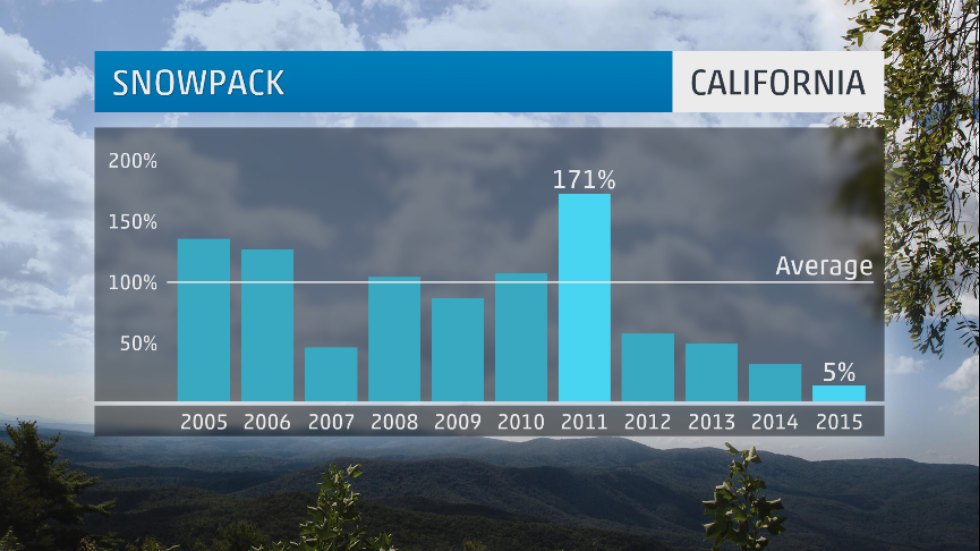 California depends on a deluge of rainfall about once every five years and must store up that water for the other four years of normal drought. When waves of “Pineapple Express” rainstorms cross the Pacific Ocean and hit California even junior water rights holders should have enough water for the next few years.

Skelton even admits that: “entitlement to water is conditional. It depends on how much is flowing. When a river is running low, a farmer with junior rights is not going to be allowed to draw out much”.

But Skelton misses the bigger reality. Over the ten years spanning 2005 to 2014 the average snowpack in California is about 92 percent, only 8 percent less than normal! That should have been a manageable amount of a water shortfall in a drought. Contrary to Skelton, it isn’t the exertion by farmers of their junior water rights that is sucking California dry. As the Wall Street Journal recently noted, it is “California’s Green Drought” that has diverted 4.4 million acre-feet of water per year for fish that has created the shortfall, not the drought.

Sure junior water rights exceed supply in four out of five dry years on average. So what? It is the average water supply over a 5 or 10-year cycle that is meteorological reality.

Or let’s look at L.A. Times writer Michael Hiltzik’s April 12 article “How Not to Think About California Water”. Hiltzik tries to correct a number of misconceptions that drought is due to the bottled water industry or thirsty almond growers that export California water overseas along with their nuts. But it is Hiltzik’s call to outlaw outdoor watering that is perhaps the biggest distortion of reality. Hiltzik quotes water guru and confessed Internet hacker Peter Gleick:

“We need to look at lawns the way we look at smoking in restaurants as not a good idea anymore.”

A new study conducted at UCLA and sponsored by the National Bureau of Economic Research has found that assigned residential outdoor watering days results in 20 to 25 percent more water usage. The UCLA study is entitled: “Free to Choose: Promoting Conservation by Relaxing Outdoor Water Restrictions.” The major fault of such a watering restriction policy is that it ignores that it is counterproductive to mandate watering on windy or hot days.

In California, we now have “iatrogenic* water shortages, that is, shortages resulting from distorted conservation policies. (“Iatrogenic* refers to doctor-created disease).

For policy-makers, our results suggest that adjusting existing OWRs (Outdoor Watering Restrictions) to allow for flexible watering patterns could produce substantial water savings at relatively low implementation costs. Moreover, as inefficiency penalties are highest at low frequencies, our findings also cast doubt on the effectiveness of policies that reduce the number of assigned days under progressively severe drought conditions. In such situations, a frequency reduction combined with a “free-to-choose” policy is likely to promote greater conservation.

Gov. Jerry Brown has recently signed Executive Order B-29-15, mandating statewide water use reductions from 10 percent to 35 percent on cities, with the 35 percent mandate being socked to the Republican Palm Springs desert area water agencies. The formula used for water cutbacks violates the state’s own Water Conservation Plan.

The reality is that such a policy will likely result in a 25 percent avoidable overuse of water. But perception overrules reality. Trying to find innocent bystanders who are harmed by people watering their lawns won’t work because it is government policies that are resulting in wasted water.

In California, any political party that claims moral and political legitimacy for saving a few fish at a cost of millions of dollars per fish should not be surprised if the opposing party blames it for the man-made water shortage that results during drought. Not even thirst can help California policy makers to snap out of their ideological perceptions into awareness of reality.

Wayne Lusvardi is former chief real estate appraiser for a large regional water district in California specializing in the valuation of land, easements, pipeline and utility corridors; California offshore islands; water rights; and water-related properties.  He served on the 2001 California Energy Crisis Task Force for the same water agency. He has been a water and energy policy analyst for the Pacific Research Institute (PRI), a free market think tank in San Francisco, and their news service Calwatchdog.com (now independent of PRI).

His professional articles have been published in Real Clear Energy.com, Reason Public Policy Institute’s Privatization Watch Journal, Public Utilities Fortnightly, MasterResource.org, The Journal of Property Economics, the USC Journal of Planning and Markets (peer reviewed), the Appraisal Journal, the Counselors of Real Estate Journal Real Estate Issues, New York University Real Estate Review, Environmental Claims Journal, and the International Right of Way Association “Right of Way” quarterly journal.  He is co-author with Charles B. Warren of the textbook What’s It Worth? The Valuation of Limited and Non-Market Properties (2008).

Some notable articles by Lusvardi include:

Do Tiered Water Rates Save Water?;

Tearing Out Lawns is Short-Sighted; What’s the Best Way to Save Water and Energy?;

Denial is a River in California: book review of Running Out of Water by Peter Rogers and Susan Leal