Are US Vehicle-Mileage Standards Obsolete?

“… new mileage standards will raise vehicle prices and may force the adoption of electric cars. But there is no evidence that the regulations will have a measurable effect on global temperatures.”

Regulations to reduce fuel consumption and to increase vehicle mileage were born during the oil shock of the 1970s. But within the last decade, the fracking revolution reestablished the United States as the world’s energy superpower.

In October 1973, the Organization of Petroleum Exporting Countries (OPEC) declared an oil embargo, targeting the United States and other nations. Within six months, the world price of petroleum quadrupled, from $3 to $12 per barrel. Shortages and price controls in the US market produced rising prices, long gas lines, and a slowing US economy.

US crude oil production declined from a high of 9.6 million barrels of oil per day (bpd) in 1970 to eventually reach a low of 5 million bpd in 2008. US imports of foreign oil rose from 20 percent of petroleum products in 1970 to more than 40 percent in 1977. In response to the growing dependence on imports, Congress passed the Energy Policy and Conservation Act of 1975 (EPCA), directing the US Department of Transportation (DOT) to establish mileage standards for cars and trucks to reduce dependence upon oil imports. 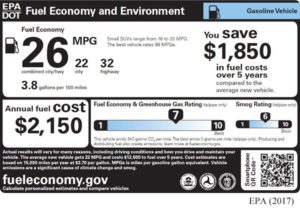 The DOT assigned the National Highway Transportation Safety Administration (NHTSA) the responsibility of establishing US vehicle mileage standards. NHTSA established the first Corporate Average Fuel Economy (CAFE) Standards in 1978. CAFE standards for cars rose from 18 miles per gallon in 1978 to 27.5 mpg in 1991 and then remained unchanged through 2010. US imports of foreign oil climbed to 60 percent of petroleum product consumption by 2005. World oil prices rocketed to over $140 per barrel in June, 2008.

But then the world changed. American geologists and petroleum engineers discovered how to use hydraulic fracturing (fracking) and horizontal drilling to extract petroleum and natural gas from shale, a common low-permeability rock formation. US crude oil production almost doubled from 5 million bpd in 2008 to over 9 million bpd in 2015. US frackers forced world oil prices to under $50 per barrel in 2015. Industry experts now project US production of over 10 million bpd in 2018. America is once again the world’s leading producer of oil and natural gas.

Net imports fell from 60 percent of petroleum products supplied in 2005 to 22 percent this year and continue to fall. Canada has become our leading foreign supplier. Imports share of petroleum products is now lower than it was when Congress enacted the EPCA in 1975. While Congressional action and mileage standards failed to reduce dependence upon foreign oil during a 30-year period, the fracking revolution slashed our dependence in little more than a decade. The original reason for vehicle mileage standards, to reduce dependence upon foreign oil, is gone. 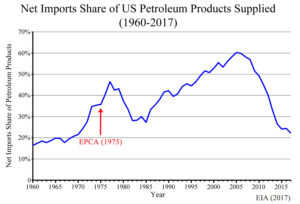 But federal regulations, once enacted, take on a life of their own. In May of 2009, President Obama announced a tightening of vehicle-mileage standards, not to reduce dependence upon oil imports, but instead to aim at “decreasing greenhouse gas pollution.” In 2012, EPA and NHTSA established CAFE standards for cars to achieve 163 grams of carbon dioxide emitted per mile by 2025, or the equivalent of 54.5 mpg. Fuel economy regulations were also established for medium- and heavy-duty trucks, the so-called GHG Phase 2 standards.

These new mileage standards will raise vehicle prices and may force the adoption of electric cars. But there is no evidence that the regulations will have a measurable effect on global temperatures. EPA and NHTSA claim a reduction of about 0.7 billion metric tons of CO2 emissions per year from 2017 to 2025, only 1.4 percent of annual world emissions. But since the oceans and biosphere naturally exhaust 20 times the amount of CO2 emissions from human industry into the atmosphere every year, the CO2 emissions savings from CAFE standards will be less than negligible.