“The blackout in South Australia that left the entire province without electricity for more than 24 hours was caused by too great a reliance on wind energy, coupled with the closing of the areas last coal-fired power plant.”

While the Wall Street Journal’s editorial page retains a free market, limited government outlook, the body of the paper continues to move left, following much of the media.

The July 11, 2017, WSJ article on Australia’s energy problems, “How Energy-Rich Australia Exported Its Way Into an Energy Crisis,” with the subtitle “The world’s No. 2 seller abroad of liquefied natural gas holds so little in reserve that it can’t keep the lights on in Adelaide—a cautionary tale for the U.S.” laid blame on LNG exports rather than relying on intermittent electricity sources.

The print edition had the title: “The Energy Shortage No One Saw Coming.” Well, Francis Menton at Manhattan Contrarian warned of just what happened in an October 6, 2016, article, “Pay Attention to South Australia.” And see his update last week in specific reference to the WSJ article, “Wind and Solar Power Don’t Work.”

These are the three real causes of Australia’s energy problems, not the actions of industry in developing Australia’s LNG exports.

The blackout in South Australia that left the entire province without electricity for more than 24 hours was caused by too great a reliance on wind energy, coupled with the closing of the areas last coal-fired power plant. 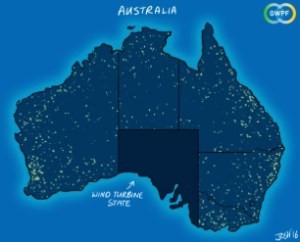 The Hazelwood, Victoria, 1,600 MW coal-fired power plant is also being closed, removing 20% of Victoria’s baseload capacity and 5% of Australia’s.

In spite of the obvious problems, the Labor government in South Australia continues to push wind energy with a goal of having wind provide 50 percent of the province’s electricity.

Now that industry is laying off workers and closing plants because of the lack of low-cost natural gas, the national government is taking action … But the actions are short sighted if the real causes of Australia’s energy disaster aren’t addressed.

At the national level, the Liberal Party, under Prime Minister Turnbull, has enacted legislation to curtail exports unless the LNG industry brings natural gas to those parts of Australia that lack sufficient supplies.

While these regulations may be needed in the short term, and are politically expedient, they will only exacerbate Australia’s energy problems unless the root causes are addressed, i.e., too much wind and solar, too few coal-fired power plants and not allowing the development of new natural gas supplies in those parts of Australia lacking sufficient supplies.

My Trip to Australia

On my trip to Australia in February, our group met with former Prime Minister Tony Abbott, who, in his talk and Q&A sessions, made it clear that Australia’s energy problems were rooted in a misguided effort to cut CO2 emissions coupled with deliberately ignoring Australia’s huge resources of coal and natural gas.

His views are essentially summarized by the three problems cited above.

Greenpeace and other extreme environmental groups have successfully imbued Ausrtralians with a fear of global warming from CO2 emissions. Greenpeace has, for example, campaigned to close coal-fired power plants.

As far back as 2011 Greenpeace, with the generous support of the Rockefeller Family Fund, proposed “A strategy to disrupt the Australian Coal Boom.” They have obviously had considerable success.

These are the facts about Australia’s predicament that should be reported by the media, not a hit-piece about the selfish, money-grubbing intransigence of the LNG industry.

This isn’t the first time the Wall Street Journal has abandoned conservative positions.

The media’s misrepresentation of facts is becoming a national disgrace.

It’s becoming clear that Australia, rather than Germany, could become the poster child for the harmful effects of renewables. See, Blackout Race Underway.

One Comment for “WSJ Blows It on Australia’s Power Crisis (intermittent resources, not fossil fuels, at fault)”