A new frontier for the world energy market is atop the world where thawing sea ice (a positive externality in this case) has opened up the possibility of major energy and other mineral production. The U.S., Canada, Russia, Denmark (via Greenland), and Norway have stakes in the Arctic domain: 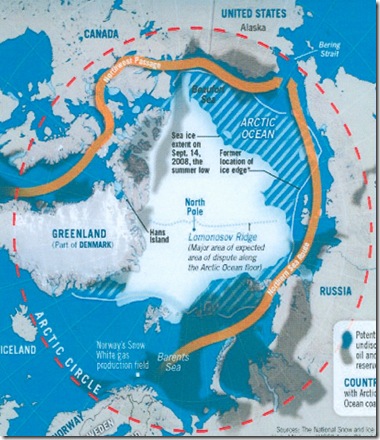 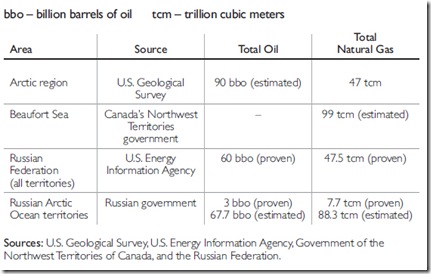 New Developments: One Bad, One Good

Unforeseen events can have an enormous impact on the development of new markets and on public policy. Two such events occurred in April 2010.

The first (April 20) was the BP rig explosion and spill. The second (April 27) was the agreement between Russia and Norway to resolve their 40-year Cold-War dispute over Arctic region claims.

BP has been rightly castigated for the loss of life and environmental damages from its monumental spill at its Macondo well in the U.S. Gulf of Mexico. After more than three months of spewing oil into the Gulf, the well appears to be capped. The economic and political costs are huge, with BP already facing containment costs of upwards of $4 billion. The U.S. political outcry has included a $20-billion shakedown (yes, shakedown) of BP to meet future spill claims, with no Congressional approval.

Future offshore development is facing six-month moratoria edicts, but these are being challenged in court. Alaskan Chukchi Sea development is put on hold until at least 2011, even after the companies planning to drill had paid record amounts in lease fees to the US government.

This knee-jerk political reaction bodes ill for the domestic offshore oil and gas industry, as rigs will move elsewhere in the world and U.S. production will face accelerated decline. Given the ongoing interest in “energy independence,” no matter how much of a canard that idea is, these decisions to curb drilling in the most promising US areas point to greater US energy imports in the future. In addition to the President, key leaders of the Departments of Interior, Energy, and the Environmental Protection Agency have been visceral in their criticism of BP, but it is totally apparent they have no idea how to fix the problem. Their remarks are pure theater – all sound and fury signifying nothing. At this point, however, basically every decision made by any oil and gas company drilling offshore in US waters has to be approved by the US government’s Incident Commander in the Gulf.

The environmentalists’ reaction has been extreme, and is generally seen as using the BP accident as a stepping stone to justifying shutting down the domestic oil and gas industry altogether. In contrast, one major airline accident would never result in shutting down the complete US aviation industry. Environmentalists are suggesting that the drilling of relief wells should be mandatory for all offshore activity, as a means of preventing a repeat occurrence of the BP experience, along with required standby ships with skimmers, booms and pumps ready to catch any spilled oil.

Clearly these ideas would raise drilling costs exponentially, but where is the cost-benefit analysis, and how high would the oil price have to go before drilling with all these “safeguards” would be economically justifiable? Raising costs to prohibitive levels through mandatory regulations goes a long way toward shutting down an industry. Nowhere is there any acknowledgment that environmentalists’ success in making many promising onshore or coastal areas off-limits to drilling activity has pushed the industry to the last remaining deepwater frontier in the lower-48.

With the warming of the Arctic and the melting of ice, a “last frontier” of oil and gas development, once off limits due to climate and related technical challenges, could now become possible, given the improvement of deep sea drilling technology. The USGS in 2008 estimated that the Arctic regions of the world contain technically recoverable undiscovered resources of 90 billion barrels of oil, 1,670 trillion feet of natural gas, and 44 billion barrels of natural gas liquids; 84 percent of these resources are located offshore. These estimates amount to about 22 percent or the world’s undiscovered oil and gas resources.

Yet the BP spill experience is already threatening to prevent future Arctic drilling activity. Sweden as well as US interests are proposing an international ban on Arctic drilling. Opponents cite the greater but unspecified risks of dealing with a spill in cold regions, the potential for extremely high clean-up costs in northern rather than southern climes, and the unspecified risks to animal and sea life. Since the risks of drilling can never be zero, the simple solution is to prevent it, never looking at the costs and benefits of such a decision. Yet the Arctic is a “use it or lose it” province for future energy development, as Canada, Norway, and Russia already recognize.

The fact that ExxonMobil, Chevron, Shell and ConocoPhillips are putting together a $1- billion rapid response team to develop and share technology for future spill or other deepwater accident events should be welcome news, since these results could be deployed in northern climates as well as in the Gulf of Mexico. Other industry members are expected to join this effort. Yet there has been no mention of this positive private-sector response in the “nay-sayers” views.

The Russian-Norwegian Accord on Overlapping Arctic Claims

This surprise agreement was announced on April 27, a week after the BP oil spill, putting an end to the 40-year dispute between the two countries. While the details of the agreement remain to be finalized, it is expected that any future energy development in that area will be carried out jointly. This leaves only the continuing dispute between Canada and the US to be resolved, presumably with a similar joint-development intention.

Both countries, along with Canada, have a policy of “use it or lose it” toward their sectors of the Arctic. They plan on projecting their presence in the Arctic: developing resources; providing patrols, deepwater ports, training facilities, and search and rescue capabilities; and defending their territory. Russia, in 2007, planted the flag on the seafloor at the North Pole to claim territory for Russia, earning the ire of Canada and other Arctic and non-Arctic nations. That claim has not been recognized. Nonetheless, in 2009, Russia issued its policy toward the Arctic to 2020 and beyond, in which it states that it sees the region as a potential area for future military conflict over resources.

The countries which are already members of the United Nations Convention on the Law of the Sea – of which the US is not – are currently engaged in a 10-year mapping effort of their national continental shelves, beyond the previous 200-mile Exclusive Economic Zones. Once the International Seabed Authority under the Convention rules on these claims, resource development can be expected to increase. But the BP experience is likely to result in all kinds of new caveats on how this drilling is carried out, thus raising costs and threatening the likelihood of the activity occurring from the outset.

The warming of the Arctic in many senses is a good news energy story, as resources previously beyond the technological pale of development may now become accessible. It also offers the possibility of vastly shorter shipping routes than those currently in use, via the Northwest Passage or the Northeast Passage, from Europe or eastern North America to Asia. Yet this poses dilemmas for Canada, which views the Northwest Passage as internal, rather than international, waters. This means that Ottawa seeks to compel information from Passage users, and must be prepared for surveillance, monitoring, search and rescue, and polar ice-breaking. While there are efforts already underway between the US Northern Command and North American Aerospace Defense Command (a joint US and Canadian agency) to extend the already well-functioning integrated command of air defense to include US and Canadian waters, progress has been slow.

The U.S. has never joined the Law of the Sea Treaty, and despite changed circumstances, the passage of time and the interest of the State of Alaska in doing so, the issue has gained little attention at the national level. While some maintain it is a flawed treaty, impinging on US sovereignty among other drawbacks, others conclude that it is better to have a seat at the table, map the US continental shelf, and have US claims accepted by an international authority. If the US adopts the “use it or lose it” policy as have others, there may be more likelihood for systematic and cohesive Arctic energy development.

The world’s demand for oil and gas is likely to grow, whatever misguided policy occurs in the U.S. But despite the best efforts of the USGS, no one will know whether the estimated undiscovered resources exist until actual drilling takes place. That activity will be affected not just by the accuracy of those estimates, but by the exploration and production costs of getting them to market.

Collaboration with our Arctic neighbors in exploiting hydrocarbons is worth pursuing, but the costs of anticipated new environmental standards, regulations, and costs may impede U.S. participation in Arctic energy development. But so long as the fundamental economics works, the resources will be developed.

U.S. as world oil consumers will benefit. Why not domestic producers too?