“[T]he evidence is clear that Increased Block Pricing is a key driver behind the distributed solar PV movement in California… The first step to rationalizing California’s electricity rates is to greatly reduce or eliminate increasing-block-pricing.”

“With federal subsidies that pay nearly half the cost of PV — and net metering that pays the residential customer for electricity supplied to the grid at the retail rate rather than the wholesale rate that other renewable generation sources receive – solar PV can beat the high-tier prices of IBP. That’s why solar PV installers are the most vocal opponents of rational rate reform that would call a kilowatt-hour a kilowatt-hour regardless of how many other kilowatt-hours you consume during the month.” 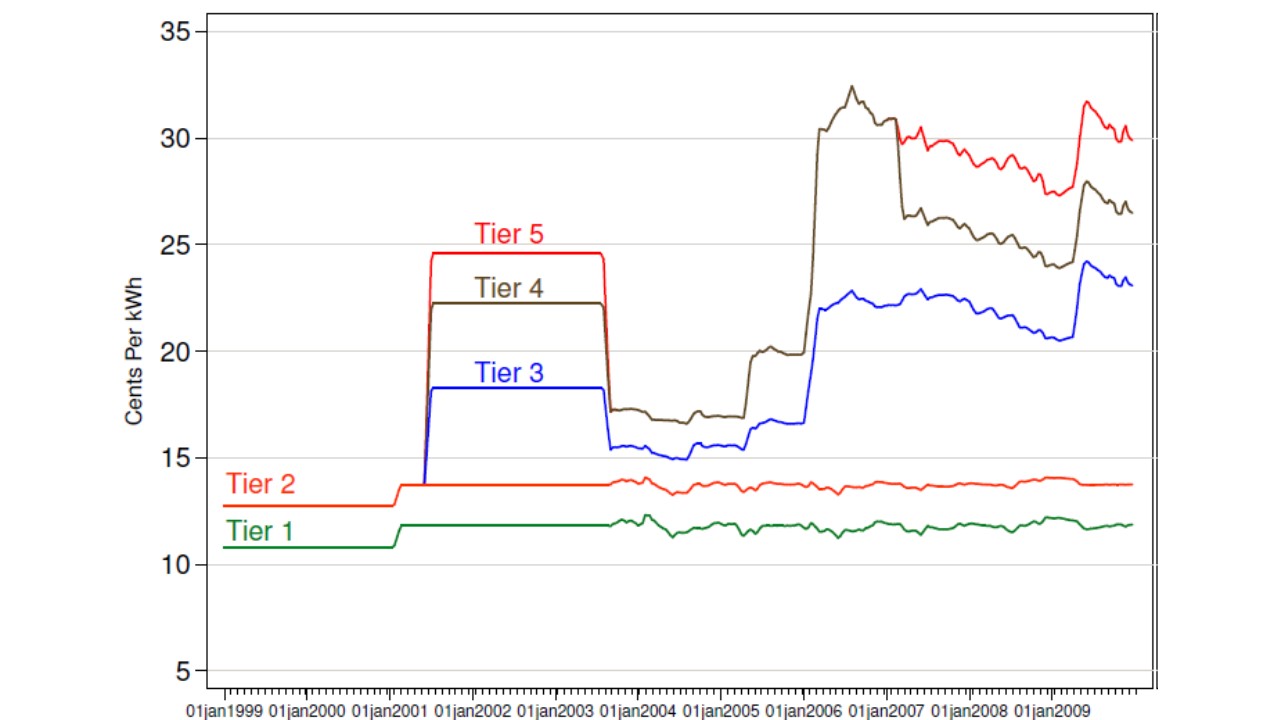 Tiered electric-rate policies are driving California homeowners that use a lot of electricity into rooftop solar installations and should be ended, says one of California’s top energy experts.

Prior to 2001, the top price tier of Southern California Edison was about $0.12/kWh (see graph above). If the top electric rate tier reverted back to 12 cents, there would not be much incentive for homeowners who now must pay about 18 to 25 cents to shift to rooftop solar energy.

Borenstein is upset that IBP policy harms heavy-using low-income households and doesn’t promote conservation. Ending it, moreover, he finds, would not unfairly shift costs from the wealthy back to non-wealthy electricity consumers.

IBP is not set by “Big Oil”; it is public policy set by the California legislature and the Public Utilities Commission (CPUC) that charges more for using additional kilowatt-hours over each billing period.

But there is another more insidious reason that ending IBP policies should be ended according to Borenstein: it would end “the key driver behind the distributed solar PV (photovoltaic) movement in California.”

One of the major criticisms of policies that promote residential rooftop solar energy panels in California is that they are mainly another tax subsidy for the rich. A preliminary study conducted by Calwatchdog.com found that California residential solar rooftop panel subsidies mainly go to the wealthy, contrary to the solar energy industry’s claim that they mainly go to the middle class.

What the solar industry doesn’t say is that such subsidies mainly benefit high-end users of electricity, no matter what income class they are in. The poor in California are already protected from high rates by signing up for CARE (California Alternate Rates for Energy), which requires an income means verification test.

An Energy Crisis is a Terrible Thing to Waste

Borenstein explains that before the California Energy Crisis of 2001 there were only two rate tiers for electricity: Tier 1 at about 10 to 11 cents per kilowatt-hour, and Tier 2 about 12–13 cents per kilowatt-hour (see above graph). (A kilowatt is 1,000 (kilo) of watts of electrical power or enough to light up one hundred 100-watt light bulbs for one hour.)

To pay off the $42 billion from unpaid bonds on old, dirty mothballed power plants along the California coast from the 2001 Energy Crisis, California legislators enacted tiered power rates that added three new price tiers: Tier 3 ≈ 18 cents per kilowatt-hour, Tier 4 ≈ 23 cents, and Tier 5 ≈ 25 cents (see graph above and table below).

The $42 billion in bonds were paid off by 2012, but the top three electricity rate tiers remained.

Only about 2 percent of single-family homeowners have rooftop solar installations in California.* If all Californians want cheap power they need to abandon the top three tiers to its electric rates, not embrace deceptively cheap rooftop solar power that only subsidies the wealthy to use more power. And as even the L.A. Times has reported, the more residential rooftop solar systems installed the more “demand will rise for more backup power from fossil fuel plants.” However, as economist Charles Frank has shown, switching to natural gas fired electricity would reduce as much or more pollution but at a much cheaper cost than rooftop or centralized solar power.

* 150,000 residential rooftop solar installations out of 7,949,196 single-family residences in California.