“Should electric cars become ubiquitous, electricity will be taxed to yield that revenue. Electricity cost would also be higher if some 95 percent of U.S. electricity were not generated by the cheapest methods – burning fossil fuels, hydro, and nuclear reaction. Should it originate from wind and solar, it would cost three-to-eight times more: a dime per km with wind, a quarter per km with solar.”

There are many variables that determine the relative economics of an economic petro-powered vehicle (Honda Civic) and an electric vehicle (Nissan Leaf).

While the Civic had a slight advantage a year ago with gasoline at $3.50 per gallon, the advantage for conventional vehicles has jumped with today’s lower pump prices. Also, should electricity for transportation be taxed at the level of gasoline and diesel, the economic gap would widen. This disadvantage of electricity would further widen to the extent that the grid is powered by wind and solar. The analysis follows.

Let’s start the comparison by investigating the driving distance “on full battery or tank.” As with all vehicles, that distance is influenced by the driver’s skill, but with electric cars there is, in addition, the ambient temperature dependence; it impacts their driving range far more than cars with internal combustion engines. The Society of Automotive Engineers (SAE) published the average driving range of the Nissan Leaf models vs. temperature; the chart is redrawn below. [1] 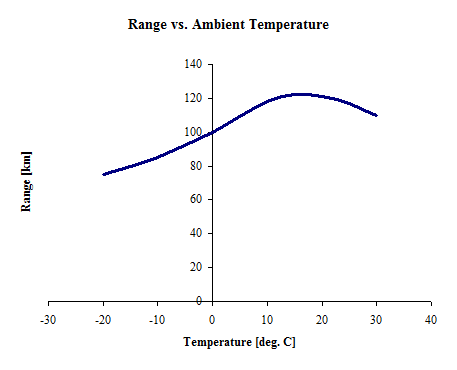 It illustrates the variability often overlooked in judging the achievable battery range in, say, Texas vs. Wisconsin. Other conditions being equal, ambient temperature decrease alone can cut the range by some 45 km from the best 122 km. Already at the beginning of this treatise we can see that comparisons will be tricky.

The U.S. Environmental Protection Agency (EPA) determined in its tests that the average Nissan Leaf consumed 19 kWh/100 km which is 0.68 megajoules per kilometre (MJ/km). That is the average record of several drivers. But it is not clear if that number includes also related effects, such as the self-draining from the battery when it is not in use, heating the passenger compartment in cold weather, and the influence of the speed of charging on the efficiency of charging.

This loss amounts to 5 percent at slow charging and up to 40 percent for the rapid one. The car electricity consumption should refer to the electricity flow from the “wall” outlet to the charger, not just from the battery to the motor and auxiliaries. We arbitrarily assume a 20 percent penalty for those three losses which then changes the number to 0.85 MJ/km. When considering the 33 percent efficiency in electricity generation from fossil fuels, the number grows to 2.5 MJ/km.

My Honda Civic, a bigger car than the Leaf and not designed for the extra low friction of electric and hybrid cars, has been getting 39 mls/gal which is 2.0 MJ/km. Gasoline refineries and distribution burn about 15 percent of the energy in the fossil fuel, a consideration that raises the number to 2.3 MJ/km. But since I drive in the style of a “driver who does not need brakes,” I looked up the dealer advertised numbers and found 36 mpg. That mileage brings the number to 2.5 MJ/km.

By coincidence those final numbers for both cars are exactly the same. Their closeness confirms the obvious: If the origin of the energy for powering either car is based on fossil fuels, the energy consumed per distance will not differ much.

The Leaf is heavier than the Civic due to, mainly, the battery. The difference is equivalent to carrying extra four husky men (400 kg) vs. the average 1/2 tank of gasoline (19 kg) in the Civic. Measurements by SAE, charted below, show the percentage increase in energy consumption due to the increased weight of road vehicles. 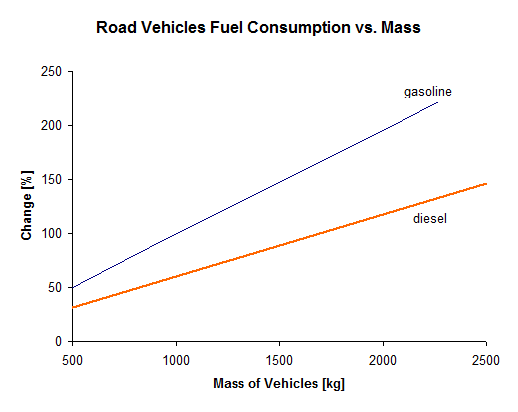 After the energy consumption comparison, let’s see how costly one unit of energy is in electricity vs. one in gasoline. This is harder yet because the cost of electrical energy varies greatly from region to region, far more than gasoline prices do, which makes generalization meaningless unless accompanied by a list the constraints involved.

Our conclusion thus far: both cars’ “mileage” cost is about the same. Should, however, gasoline prices remain low, as increasingly seems to be the case, the Civic will be proportionally cheaper to operate. A $1.75/gallon price means travelling twice as far per unit of energy that the Leaf would.

There are numerous items that may alter the price comparison. As said, the swing in either price depends on time and location, but the price swing with gasoline is greater and more frequent than with electricity. Within the gasoline price, some 30 percent of the cost goes to the federal, state and other taxes, while that percentage is near zero for electricity.

Should electric cars become ubiquitous, electricity will be taxed to yield that revenue. Electricity cost would also be higher if some 95 percent of U.S. electricity were not generated by the cheapest methods – burning fossil fuels, hydro, and nuclear reaction. Should it originate from wind and solar, it would cost three to eight times more: a dime per km with wind, a quarter per km with solar.

To finish the cost comparison, the dealer price for the Leaf is 20 percent higher than for the Civic, similar models, before subsidies.

After all this information, it is up to the reader to decide which car is better under his/her circumstances, including that those may change in time. No generally applicable guideline exists. The author hopes that it is apparent from the above.

Overall, the research shows that electric cars are cleaner than those that rely on internal-combustion engines only if the power used to charge them is also clean. That is hardly a surprise, but the magnitude of the difference is. How green electric cars really are, then, will depend mainly on where they are driven. In France, which obtains more than half its power from nuclear stations, they look like a good bet. In China—which is keen on electric cars, but produces some 80% of its electricity from coal—rather less so.

Emissions from manufacturing electric cars must also account for batteries that are made from materials such as lithium, copper and refined silicon, which require much energy to be processed.

As a side issue related to the electrification of the U.S., it may interest you that should all the cars (200 million of them) be the electric Leafs, and driven as today for 15 000 km annually, their charging would draw some 80 billion watts based on the earlier MJ/km number. Of course, not everybody will be satisfied driving a small car so the overall consumption will be higher, say 100 GW.

To put that number into perspective, the present electricity consumption of the whole country amounts to 450 GW. [2] That wattage powers everything, from toasters and air conditioners to factories, hospitals and cities. Adding that new generating and grid capacity any time soon is of concern when considering that the present level was being developed since the time of Edison.

Notice also that this need for additional electricity does not include other road vehicles such as vans, busses and trucks, and that it assumes for the charging to be spread over 24 hours discounting commuters all plugging in past rush-hours.

Regarding the assumption that renewables become the predominant energy source, consider that the amount of electricity flow from wind, solar, and geothermal reached only 22 GW after 40 years of subsidized building of those three sources (hydro and wood has existed longer than that and have been stagnant or declining; other renewables contribute insignificant amounts).

Electric cars offer no savings in energy, money, or emissions at present. Electricity supply from renewables cannot cover but an insignificant portion of road vehicles. The numerical values in this article allow easy updates as conditions change in the future.

Writing this, it was not my intention to promote or condemn electrical cars. Personally, I thought that electrical vehicles, in cities for deliveries, airport shuttling, etc., would commonly free those places of the incessant noise and air pollution from gasoline and diesel vehicles.

I based these thoughts on the belief that “green” nuclear-made electricity would have been abundant and cheap today. We had it available in the U.S. since 1950s.

Instead, we are burning precious hydrocarbons that are needed where no alternatives exist such as in the making of medicines, plastics and steel. I drove electrical delivery vehicles in summer jobs and have been involved with production of non-polluting vehicles such as the battery or the fuel-cell powered electrical cars and steam cars for decades. That research was focused on ordinary passenger cars rather than on the above mentioned short-haul vehicles.

Interestingly, those misguided projects were supported by Government grants. Today, millions of people are still tormented daily waiting at airport terminals and living in inner cities amid unnecessary noise and air pollution. In this respect, the Tesla car is an example of misappropriated funds for it cannot alleviate the traffic nuisance problems to any measurable degree.

[2] All references to energy consumption/production are from the statistics of the Department. Of  Energy, Energy Information Administration, Annual Energy Review (eia.doe.gov). Electricity data specifically are from Tables 7.2.

Stan Jakuba is a specialist in alternative power sources and engine technology from his career in manufacturing and research. Recently retired, he lectures and consults from Connecticut.