Snow & Global Warming in the Big Apple: Knappenberger in 2011

[Editor Note: Chip Knappenberger, a leading data-driven climate scientist, kindly consented to let MasterResource reprint his post from January 13, 2011, at this site, Global Warming Means More Big New York City Snowstorms? Not So Fast!, for its relevance to the current winter storm in the Northeast.  He is currently updating his analysis from five years ago.]

New Yorkers are digging out from another major snowfall [this mid-January 2011]. The 10 inches or so they got on Wednesday came less than 3 weeks after some 20 inches fell the day after Christmas.

And, odd as it may seem, some folks are linking big snows and big cold in the Big Apple to anthropogenic global warming.

But, a look back through more than 140 years of weather observations from New York’s Central Park shows little evidence to support such a contention.

On December 25, 2010, as New York City was about to be buried under almost 2 feet of snow, the New York Times ran an op-ed by Judah Cohen, a long-range forecaster for the private forecasting firm Atmospheric and Environmental Research, explaining his ideas on how big snowstorms in the Northeastern U.S. were being driven by global warming—specifically, the melting of the Arctic sea ice.

Cohen closed his editorial “Bundle Up: It’s Global Warming” with the following quote:

“It’s all a snow job by nature. The reality is, we’re freezing not in spite of climate change but because of it.”

In my opinion, if there’s a snow job going on, it is being served up by Cohen.

But let’s not forget that whenever there is an unseasonably warm spell in the middle of winter in the Northeast or lack of snow there, that, too, is followed by the major press outlets running stories of global warming.

Witness this gem, also from the New York Times, from January 15, 2000, published during a rather warm and snow-free period, and in which Environmental Defense Fund’s Michael Oppenheimer opines:

”I bought a sled in ’96 for my daughter,” said Dr. Michael Oppenheimer, a scientist at the nonprofit Environmental Defense Fund. ”It’s been sitting in the stairwell, and hasn’t been used. I used to go sledding all the time. It’s one of my most vivid and pleasant memories as a kid, hauling the sled out to Cunningham Park in Queens.”

…Dr. Oppenheimer, among other ecologists, points to global warming as perhaps the most significant long-term factor.

The Times apparently likes to have all its bases covered. Perhaps it ought to facilitate a meeting between Oppenheimer and Cohen to sit down together and sort things out. After all, one of them has to be right. Right?

Let’s head to the Halls of Data to see what we can find out for ourselves.

In this case, we find is a treasure trove of weather data collected in New York’s Central Park that includes not only temperature observations but snowfall records that dates back into the 1870s and is freely and readily available from the New York City National Weather Service Office webpage .

If global warming is leading to more or less snowfall in New York City to such a magnitude that it is making headlines, it ought to be plainly obvious in the 141 year record that we have available. 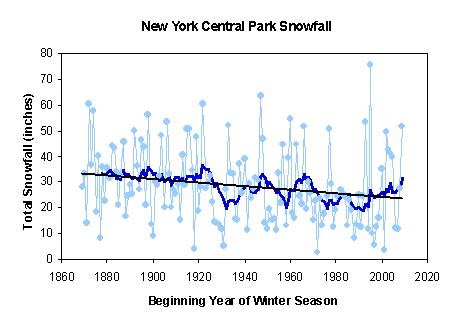 Figure 1. Total seasonal snowfall record in New York’s Central Park from the winters of 1869-70 through 2009-10 (light blue points). The 10-yr trailing moving average is indicated by the thick dark blue curve and the overall trend is indicated by the black line (data source: National Weather Service)

So there you have it!

Wait, which is it? Global warming is causing more snowfall in NYC or less?

The overall trend is a statistically significant decline in winter snowfall that totals to about 25% from the 1870s to now. But, the 10-yr running means shows that the low point was reached in about the late 1980s and that the decadally-averaged snowfall totals have increased by about 50% since then (to a level currently that is slightly more than the average over the entire period).

This doesn’t help much in answering our question.

So let’s explore the possible mechanisms.

Judah Cohen argues in his Times op-ed that the decline in late summer Arctic sea ice during the past couple of decades is leading to a greater moisture availability (from the open ocean) to fuel early fall snowfall across Siberia. And that more early snowfall across Siberia helps to build up a mass of cold air over the snow cover and that this mass of cold air diverts the atmospheric jet stream away from a low amplitude pattern and towards a pattern characterized by high amplitude standing waves with a preference for an atmospheric trough (which leads to cold outbreaks and active weather) in the eastern U.S. Voila! More winter snow in New York City from less summer sea ice as a result of global warming.

While this seems to have an air of reason to it, problems emerge when looking for this signal in the data. Figure 2 shows the summer time ice history in the Arctic since 1900 as put together by the Polar Research Group of the University of Illinois at Urbana-Champaign. Granted, there isn’t a whole lot of data to go on prior to the satellite coverage which begins in the late 1970s, but nevertheless, there was probably more ice coverage during the summers in the early part of the 20th century than there is during the summers now (which would mean less NYC snowfall then via Cohen’s mechanism). 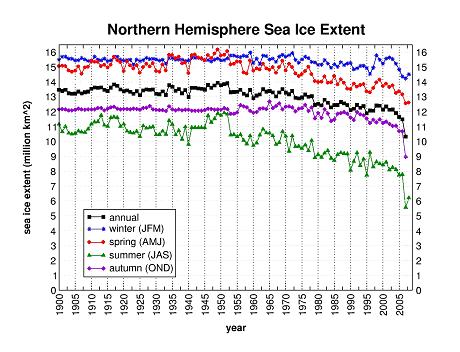 Comparing the Arctic summer ice extent history (green triangles in Figure 2) with the Central Park snowfall history (from Figure 1) shows little that would make you think that less summer sea ice leads to more NYC snowfall—in fact, the general shape of the two graphs (both showing long-term declines) suggests a positive correlation rather than the negative one forwarded by Cohen. This is not to say that conditions in Siberia do not in some instances influence the weather over the eastern U.S., just that the influence is not really bankable (see here for more discussion about this).

This can be seen in Figure 3, in which I plot the average winter (DJF) temperature in Central Park vs. total seasonal snowfall. Notice a pretty strong negative relationship—the warmer it is during the winter, generally the less snow accumulates in Central Park. 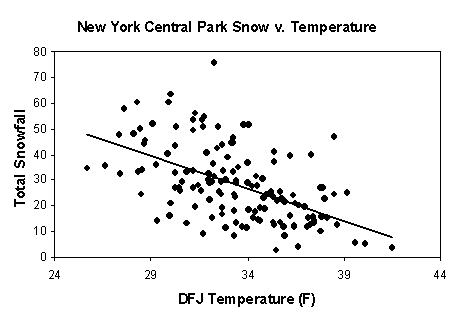 And finally, I plot the winter temperature history in Central Park since 1870, which shows that winters have been getting warming there (Figure 4), which, based on the relationship in Figure 3, should exert a pressure for less total snowfall. 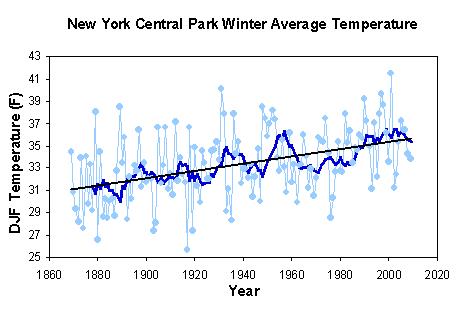 Now whether or not Central Park’s winter temperature history reflects anthropogenic “global warming,” naturally variable regional circulation changes, or local city growth, I’ll leave up to your own views (for what it’s worth, I think it probably reflects a bit of all three).

But, do note, that even though warmer winters lead to less snowfall, and overall winters have been warming, that the snowfall history of Central Park shows that big snows and big winter snowfall totals still do happen, and do so with some frequency—big snows are hardly a thing of the past.

So, the way I see it, it is premature to lay the blame on global warming when bemoaning the lack of snowfall in NYC in any particular year (like Oppenheimer was keen on a decade ago) and it is a bit silly to blame global warming for the (relative) plethora of big snows in recent years (like Cohen is want to do).

Which leaves natural variability as the primary driver of just how white New York City’s winters are.

I wonder how that would play as a New York Times op-ed?