On That ‘Global Warming’ Blizzard

About a week ago, a strong winter storm, known as a nor’easter, was making its way, hit and miss, up the Northeastern seaboard. While forecasts of two feet or more in New York City were busts, forecasts of near three feet in the Boston environs were right on.

As almost goes without saying nowadays, speculation as to the influence of human-caused global warming on the behavior of the snowstorm are rife. Any by “speculation,” I mean blaming global warming for the storm’s ferocity.

And, as also goes without saying, the actual science behind such speculation is both slim and countered by a large body of confounding evidence.

But the number of stories in the mainstream media that hyped the former greatly outnumbered any that even bothered to mention the latter.

Below is reprinted a blog post that I co-authored with Patrick Michaels for the Cato Institute in the hours leading up to the storm trying to tamp down the global warming hype.

Since that piece appeared, there have been a few others articles around the web that have also reviewed the global warming connection to nor’easters and found it to very unsupportive of the idea that global warming is making nor’easters more intense. They can be found here, here and here.  They are worth the look.

Over the next couple of days, as the Nor’easter honing in on the New England coast matures and eventually unleashes its winter storm fury, you are going to be subject to a lot of global warming hype.

After all, the climate change alarmist credo is: let no extreme weather event pass without pointing out that it is “consistent with” climate change caused by human industrial society.

The push has already begun.

But this time around, the pushback is also well-prepared.

While the “curator” of the Washington Post’s newly-minted online “Energy and Environment” section Chris Mooney tell s us in his article that global warming may make blizzards worse by increasing the temperature of the western Atlantic ocean and thereby increasing the moisture feed into the developing storm, meteorologist Ryan Maue is quick to point out that just to opposite is likely the result—the elevated sea surface temperatures make such storms tamer.

Maue goes on to add that it is “easy to make case that global warming weakened this blizzard significantly due to warmer [sea surface temperatures].”

While Ryan is probably being a bit optimistic here, the reality is that this blizzard (in fact pretty much all storm events) are the result of a very complex system of physical interactions—the precise behavior of which one of which is not completely understood, much less perfectly predictable. This makes ascertaining the influence of human-caused climate change virtually (if not entirely) impossible to detect.

Blizzards affecting New York City are perfect example of this.

A couple years back, during another New York City blizzard, we reviewed some of the confounding factors at play in determining how much it snows in Central Park. Our conclusion after reviewing the cases for both more and less snowfall there?

“Which leaves natural variability as the primary driver of just how white New York City’s winters are.”

Figure 1 will give you some idea of what we were talking about. It shows the winter snowfall history from New York’s Central Park. 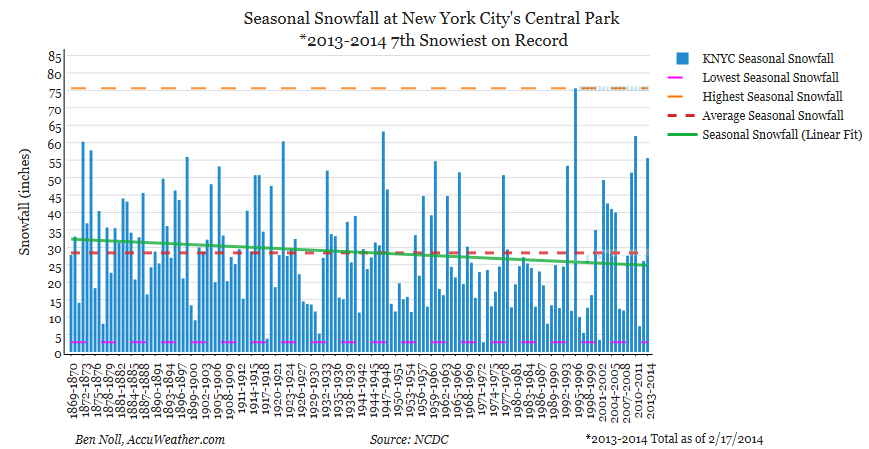 Kudos to you if you can pick out the patterns formed by global warming. And if you can, please write them up for scientific publication somewhere. We’re all ears.