By Willie Soon and Christopher Monckton of Brenchley -- September 19, 2014

“Misuse of climate models as false prophets is costly in lives as well as treasure. To condemn the poorest of India’s poor to continuing poverty is to condemn many to an untimely death. India Prime Minister Narendra Modi is right to have no more to do with such murderous nonsense. It is time to put an end to climate summits. Real-world evidence proves they are not needed.”

India’s Prime Minister Narendra Modi sensibly refuses to attend yet another climate summit – this one called by Ban Ki-Moon in New York for September 23 under the auspices of the United Nations, which profits handsomely from the much-exaggerated climate scare.

Environmentalists have decried Mr. Modi’s decision. They say rising atmospheric CO2 will cause droughts, melt Himalayan ice, and poison lakes and waterways across the Indian subcontinent.

However, the UN’s climate panel, the Intergovernmental Panel on Climate Change or IPCC, has already had to backtrack on earlier assertions that Himalayan glaciers would all be gone within 25 years. The most comprehensive review of drought trends worldwide shows the global land area under drought has fallen throughout the past 30 years. Other alarmist claims fare no better.

Mr. Modi, a spiritual man who is also down-to-earth, knows that a quarter to a third of India’s people – at least 300 million of its citizens – still have no electricity. In Bihar, four homes in five are still lit by kerosene. His priority is to turn the lights on all over India.

Electric power is the quickest, surest, cheapest way to lift people out of poverty, disease and subsistence agriculture, and so to stabilize India’s population, which may soon overtake China’s. Families that no longer have to worry about children dying before they are five, or need them to tend starvation-level crops, tend to downsize their families.

“There would appear to be an insufficient recognition in global discussions of the need for increased power in the poorer countries. In India, for example, about a third of the people do not have any power connection at all. Making it easier to produce energy with better environmental correlates (and greater efficiency of energy use) may be a contribution not just to environmental planning, but also to making it possible for a great many people to lead a fuller and free life.”

Despite extensive lip service, the world’s governing elites, however, do not really care about poverty. Climate change is their new and questionable focus.

In late August, the Asian Development Bank, for instance, used questionable IPCC scenarios for rising carbon dioxide levels to predict that warmer weather would cut rice production, rising seas would engulf Mumbai and other coastal megacities, and rainfall would decline by 10-40% in many Indian provinces. Science, reality and history do not support this fear-mongering.

Droughts and floods have occurred throughout India’s history. In the widespread famine caused by the drought of 1595-1598, “Men ate their own kind. The streets and roads were blocked with corpses, but no assistance can be given for their removal,” a chronicler in Akbar’s court reported.

Every Indian knows that too much (or too little) monsoon rainfall can bring death. That is why the Asian Development Bank’s latest computer-generated doom-and-gloom scenario is not merely erroneous and unwelcome. It is repugnant. Garbage in, gospel out.

In truth, rice production has risen steadily, sea levels are barely rising, and even the UN’s climate panel has twice been compelled to admit there is no evidence of a worldwide change in rainfall.

Subtropical India will not warm by much: advection would take most additional heat pole-ward. Besides, globally there has been little or no warming for almost two decades. The IPCC’s much vaunted climate models did not predict that. The UN’s climate panel, on our advice, has recently all but halved its central estimate of near-term warming.

Sea level is rising no faster than for 150 years. For 2004-2012, the Envisat satellite reported a rise of a tenth of an inch. For 2003-2009, gravity satellites actually showed sea level falling. Results like these have hitherto not been reported in the mainstream news media.

More than two centuries of scientific research have failed to make the duration or magnitude of monsoons predictable. Monsoons depend on sea and surface temperature and wind conditions in the Indian and Western Pacific Oceans, timing of El Niños in the equatorial Pacific, variations in Eurasian and Himalayan winter snow cover, and even wind direction in the equatorial stratosphere.

Earlier this year, the Indian Meteorological Department predicted a 1 in 4 chance that the 2014 monsoon rainfall would be below the long-term average, leading to a year of drought

The prediction was wrong. Widespread floods in northwestern India and Pakistan have killed several hundred people. Many environmentalists and governmental officials are now insisting that rising atmospheric CO2 is the culprit for the floods they did not predict. Yet the one cause of the recent floods that can be altogether ruled out is global warming, for the good and sufficient reason that for 18 years there has not been any warming.

Worse still for CO2 alarmists: 20th and 21st century warming did not occur in the western Himalayas, and paleo-temperature records for the last millennium confirm no exceptional recent warming in this region. In fact, the Medieval Warm Period was warmer than today almost everywhere else outside of the western Himalayas.

Regardless of the numerous political manipulations of fact and reality, the scientific problems of forecasting monsoons self-evidently remain unsolved.

In 1906, the forecasts depended on 28 unknowns. By 2007 scientists from the Indian Institute of Tropical Meteorology were using 73 factors. So insisting that just one variable – CO2 concentration – will drive future monsoons is unscientific.

Professor Nandakumar Sarma, vice-chancellor of Manipur University, recently confirmed that “even supercomputers cannot predict what will happen due to climate change within 10-20 years, since there are millions of variable parameters.” Models said monsoons would become more intense. Instead, they have weakened for 50 years.

As for the floods in the northwest, Dr. Alpa Sridhar’s study of three major river floods in Gujarat confirmed that past floods were at least 8 to 10 times worse than recent floods, such as that of 1973. CO2-based climate models have been unable to “hindcast” or recreate those floods.

Models also failed to replicate the 60-year and 200-year cycles in monsoon rainfall that are linked to solar cycles detected by studies of ocean sediments from the Arabian Sea.

A new study led by Professor K.M. Hiremath of the Indian Institute of Astrophysics shows the strong, possibly causative correlation between variations in solar activity (red curve) and in monsoon rainfall (blue curve) in Figure 1. The red curve is actually the result of a simulation of the Indian monsoon rainfall for the past 120 years, using solar activity as a forcing variable. The sun is visibly a far more likely influence on monsoon patterns than changes in CO2 concentration.

Governments also overlook a key conclusion from the world’s modelers, led by Dr Fred Kucharski of the Abdus Salam International Centre for Theoretical Physics: “The increase of greenhouse gases in the twentieth century has not significantly contributed to the observed decadal Indian monsoonal rainfall variability.” 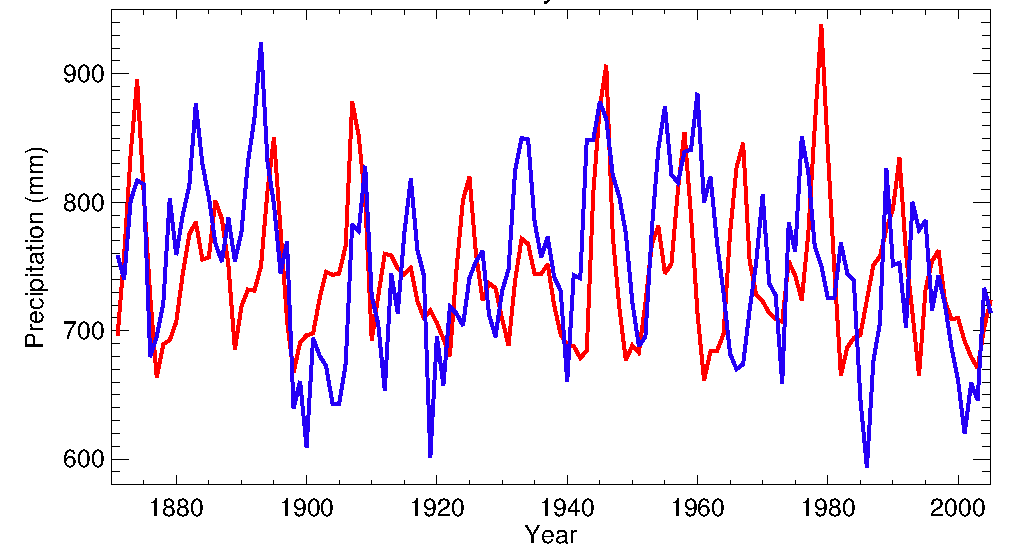 Figure 1. There is a strong and possibly causative correlation between variations in solar activity (red curve) and in monsoon rainfall (blue curve).

Not one climate model predicted the severe Indian drought of 2009, followed by the prolonged rains the next year – a rainfall increase of 40% in most regions. These natural variations are not new. They have happened for tens of thousands of years.

A paper for Climate Dynamics, co-authored by Professor Goswami, recently-retired director of the Indian Institute of Tropical Meteorology, shows why the models relied upon by the IPCC’s recent assessments cannot accurately predict monsoons. All 16 models examined had the same fatal flaw: they made rain too easily, by artificially elevating air and water masses in the atmosphere.

Models are not ready to predict the climate. Misusing computers to spew out multiple “what-if” scenarios is unscientific.

Most of the fundamental problems in our immature understanding of climate have remained unresolved for decades. Some cannot be resolved at all. The UN’s climate panel admitted in 2001 what has been known for 50 years: because the climate is a “coupled, non-linear, chaotic object,” reliable long-term climate predictions are impossible.

Misuse of climate models as false prophets is costly in lives as well as treasure. To condemn the poorest of India’s poor to continuing poverty is to condemn many to an untimely death. India Prime Minister Narendra Modi is right to have no more to do with such murderous nonsense. It is time to put an end to climate summits. Real-world evidence proves they are not needed.

Willie Soon is a solar physicist and climate scientist at Cambridge, Massachusetts, USA. Lord Monckton was an expert reviewer for the Fifth Assessment Report (2013) of the UN’s climate panel, the IPCC.