Why The World Will Not Agree to Pricing Carbon (Part II)

[Editor Note: Part I yesterday explained why carbon pricing cannot succeed unless it is global, and global carbon pricing is unlikely to be achieved, let alone sustained for the time until the job is done (centuries). Today’s post evaluates the output from the most widely cited and accepted climate economics model to show that at realistically likely participation rates, carbon pricing would be economically damaging for all this century, if not far beyond.]

A new report by Sir Nicholas Stern and co-authors “Better growth better climate”, released a week before the UN Climate Summit in New York (September 2014), advocates governments around the world intervene to impose carbon pricing, wind and solar power, and energy efficiency improvements. They imply the net economic costs could be negligible.

However, these claims do not seem to reconcile with results from the DICE-2013R model, developed by the highly respected and cited climate economist, William Nordhaus. Here I draw on the work by Nordhaus to argue that a global agreement on carbon pricing is unlikely.  I focus on the probability that carbon pricing schemes will succeed rather than debating the various estimates of the projected costs and benefits; the latter are extensively debated in the literature.  I conclude by suggesting an alternative to carbon pricing.

The issues presented here may have significant policy implications.

The following chart shows the projected net-benefit to 2100 of carbon pricing under seven scenarios. All scenarios show negative net-benefit for nearly all this century.  The information is derived from the Nordhaus DICE-2013R Integrated Assessment Model, the most widely used and cited model for estimating costs and benefits of different policy options and the carbon prices needed to achieve them. 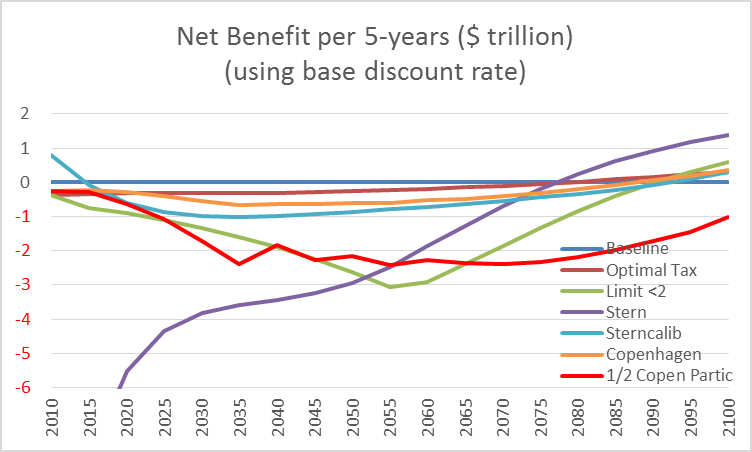 Each series shows the present value net-benefit compared to a baseline. The vertical axis is $ trillion per 5-years.  Net benefit is projected benefit (reduced climate damages) minus projected abatement cost.  Present value is calculated using the discount rates for the ‘Baseline’ scenario.  The Baseline scenario assumes the policies to reduce CO2-eq that existed in 2010 will continue unchanged until the year 2300.  It can be thought of as the ‘take no more action’ scenario.  The purpose of this scenario is to provide a comparison for the other scenarios. The costs and benefits of the other six scenarios are subtracted from the Baseline scenario to calculate the change from the baseline.  The scenarios (except ‘1/2 Copen Partic’) are described in DICE User Manual, pp24-25.

All scenarios except ‘Copenhagen’ and ‘1/2 Copen Partic’ assume 100% participation from 2010;  i.e., all countries implement a carbon price in unison in 2010, the pricing scheme covers all human-caused GHG emissions, the price and rules are adjusted globally in unison and it continues for 290 years.

The DICE-2013R model does not include Copenhagen ‘realistic’ or ‘pessimistic’ participation rates, so I added another scenario to test the sensitivity of the net-benefits to the participation rate. I arbitrarily halved the ‘Copen’ participation rate and call the scenario ‘1/2 Copen Partic’.  The chart shows the net benefits are negative for all this century.

[Note: The irregularities in the ‘Copen’ and ‘1/2 Copen Partic’ lines are caused by the assumed Copenhagen participation rate to meet the Copenhagen commitments (not yet ratified).]

Further, for the reasons discussed in Part 1, even the ‘1/2 Copen Partic’ participation rate is unlikely to be achieved.

Carbon pricing is considered by most climate economists’ to be the optimum way to cut global GHG emissions.  But, arguably, there is a better way.  It is to deregulate so the cost of low-emissions energy can come down over time, especially in developing countries.  With this approach there would be no need for carbon pricing, emissions monitoring, or enforcement mechanisms involving policing, disputation, conflicts and international courts.